'Interestingly, Mr. Khan has also been very vocal about the fact that since Pakistan Muslim League-Nawaz (PML-N) supremo, Nawaz Sharif has been disqualified from holding public office for life, he shouldn't be a part of his political party, the same rule, however, does not apply to Mr. Jehangir Tareen considering he has taken the prime role in organizing PTI's meetings with independent candidates and many smaller parties including MQM post elections on the quest of a strong center' 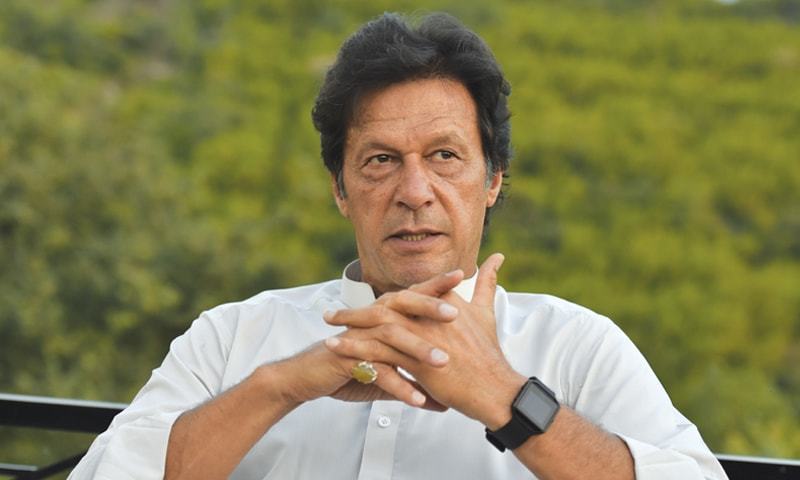 After, perhaps the most controversial elections in the country’s history, the Pakistan Tehreek i Insaf (PTI) Chairman, Imran Khan, whose party will form government in the center with support from independent candidates, delivered a much-applauded victory speech.

Mr. Khan’s argument regarding the ills of Pakistan has always been primarily focused on the strengthening of institutions by eradicating corruption hence it came as no surprise when he promised the country a corruption free Pakistan. Mr. Khan also very confidently asserted that the country will be governed as it has never been governed before, claiming that the VIP culture of politicians will be brought to an end and that he will be a lead advocate of adopting a more “simple lifestyle”.

Credit must be given where its due, Mr. Khan or PM Khan delivered quite a refreshing speech, considering for the past five years, we didn’t hear much from him except the malignment of his political opponents, however the only question that matters in Pakistan is this, was it just that, a speech?

Mr. Khan’s Pakistan Tehreek i Insaf  (PTI) has been the ruling party in Khyber Paktunkhwa for five years now and their record has been marred with exactly what Mr. Khan seemingly despises the most: corruption. Khan has repeatedly boasted of a non-politicized and corruption free police force in the KPK under his government’s tenure, however, the National Accountability Bureau (NAB) has ordered a high-level inquiry into the KPK police mega corruption scam during Inspector General (IG) Nasir Khan Durrani’s tenure. There are claims of embezzlements and losses that amount to millions in purchase of equipment, constructions and vehicle maintenance.

Another interesting anecdote of the happy tale of corruption free KPK is the KPK Ehtasab Commission which was to serve as an accountability mechanism to reduce corruption. Under the directorship of  Director General Hamid Khan, in less than two years, 29 references of mega corruption cases were filed in the accountability court. Moreover, for the first time in KPK’s history powerful bureaucrats and ministers were brought under legal scrutiny, the PTI government; however sensing troubled waters acted swiftly to reduce the powers of the Ehstasab Commission. The ordinance that the KPK government passed required that a suspect could only be arrested with the approval of a 5-member commission and that no legislator will be arrested without the prior knowledge of the Senate’s chairman or speaker of the Provincial Assembly. Also, it was made mandatory that no civil servant would be arrested before the intercession of the chief secretary. Following the ordinance, General (retd) Hamid Khan resigned in protest in February 2016 and to this day the 29 mega corruption references lie pending.

The most ironic plot twist, however, is the fact that despite the fact Tehreek-i-Insaf is literally the Party of Justice; according to the Asia Dialogue (the online magazine of the University of Nottingham Asia Research Institute) KPK’s prosecution department had the worst record in the last 5 years, of the 4 provinces. There have been numerous allegations of corruption and inefficiency to the extent that even the Supreme Court got so annoyed with the state of the prosecution department that they considered shutting it down altogether.

The tiring corruption scandals, however, do not end at institutional failure which Mr. Khan has repeatedly identified as the prime factor for the country’s ills. The Peshawar Sustainable Bus Rapid Transit (BRT) project has already been termed “shady and shaky” by the city’s High Court. The huge expenses of the project and the alleged corruption of Chief Minister Pervez Khattak have put the former CM in a tough spot. The project’s initial finances were calculated to be 49.3 billion PKR; however, the incomplete project has now soared to a high of 67.9 billion PKR. This is also fairly interesting, considering that the Lahore, Rawalpindi and Multan metro projects ushered a combined cost of 103 billion PKR. Furthermore, the Peshawar High Court also mentioned in its detailed verdict that the firm to which the BRT project was awarded is a black-listed firm in another province. The case has currently been handed over to NAB for further investigation.

Mr. Khan had also promised people a fairly corruption free leadership, however the tumultuous corruption records of Khan’s close associated Jehangir Tareen and Aleem Khan are public knowledge. Jehangir Tareen has been declared unfit to run for any political office for life by the Supreme Court because he did not declare an off-shore company in his assets. Furthermore, Tareen has been allegedly involved in money laundering and buying political favors to the extent that even PTI leader Shah Mehmood Qureshi publicly spoke out against Tareen. Moreover, his massive sugar mill business prospered immensely during his five-year tenure as the Minister of Industries in the Musharraf era and if that doesn’t raise quite a few eye brows, there’s not much left to say except for the fact that Tareen is known to be the benefactor of all “anti corruption” PTI rallies.

Interestingly, Mr. Khan has also been very vocal about the fact that since Pakistan Muslim League-Nawaz (PML-N) supremo, Nawaz Sharif has been disqualified from holding public office for life, he shouldn’t be a part of his political party, the same rule, however, does not apply to Mr. Jehangir Tareen considering he has taken the prime role in organizing PTI’s meetings with independent candidates and many smaller parties including MQM post elections on the quest of a strong center.

PTI’s other champion Aleem Khan has been involved in massive housing scams and has been reported to have made millions at the expense of his “clients.” His case in currently being investigated by NAB and PTI’s Fawad Chaudhry, who was also the first person to congratulate us over a “Naya Pakistan” under the premiership of Mr. Khan, has also been summoned by NAB with regard to the housing scams. The most interesting fact, however, is that Aleem Khan’s off shore companies were also mentioned in the Panama papers. And this is indeed the same Panama scandal over which Mr. Khan led the whole country in a political chaos.

In Mr. Khan’s speech, he spoke of how he will be embarrassed to live in such an exorbitant PM house in a poor country like Pakistan and has also spoken extensively in the past about putting an end to the VIP culture in the country, however, security for VIPs in KPK cost a total of 278.9 million PKR in just 2015 and this came at a time when Mr. Khan went from Karachi to Khyber screaming how he had miraculously ended the VIP culture in KPK. False promises much?

The anti-corruption rhetoric sounds all nice and heartwarming; however, reality is much different than the vivid image Mr. Khan has painted for us. Besides corruption Mr. Khan’s claims in his victory speech about a level playing field for all citizens is a hard sell, to say the least. Mr. Khan has time and time again defended the very controversial blasphemy laws of the country. These laws have stigmatized the Ahmeddiya community entirely and have led to around 69 vigilante murders in the country since 1990s and numerous false accusations which have made the targeting of minorities in “purana Pakistan” all the more easy. In order to show his commitment to the protection of these rather vile blasphemy laws, Mr. Khan made it mandatory in the election oath to swear on the finality of the Prophet.

Mr. Khan has never shown a hard stance against extremists who have literally been rampaging the country for a good two decades now. On the contrary, however, under Mr. Khan’s government in KPK 300 million PKR were allocated to the Darul Uloom Haqqania, from the provincial budget in the year 2016-2017. Also, quite recently in February the KPK government approved another grant of 277 million PKR to Darul Uloom Haqqania. Let us remain cognizant of the fact this is the very same Madrassa whose alumni comprise of  Mullah Omar, founder of the Taliban; Jalaludin Haqqani, leader of the Haqqani Network; Asim Umar, leader of Al-Qaeda’s South Asia wing and Akhtar Mansoor, the infamous successor of Mullah Omar. Furthermore, the chancellor of Darul Uloom Haqqania, Maulana Sami-ul-Haq, has on numerous occasions, publicly claimed that the “Taliban are his children” and he happens to be a very proud father. If this is our commitment to the fight against extremism, then God help us.

Also, PTI’s much controversial public courting of Fazlur Rehman Khalil, the founder of Harkat-ul-Mujahideen (HuM) terror group and a US-designated global terrorist with links to al-Qaeda, is embarrassing to say the least.

Conclusively, putting all cynicism and rationale aside, let’s hope Mr. Khan is able to deliver a better performance the next five years.

The writer is undergraduate student of Lahore University of Management Sciences (LUMS).