Child Marriages: a menace to the society

The time when they need support, encouragement, advice and confidence, they have to adjust to the unfamiliar environment of their new homes 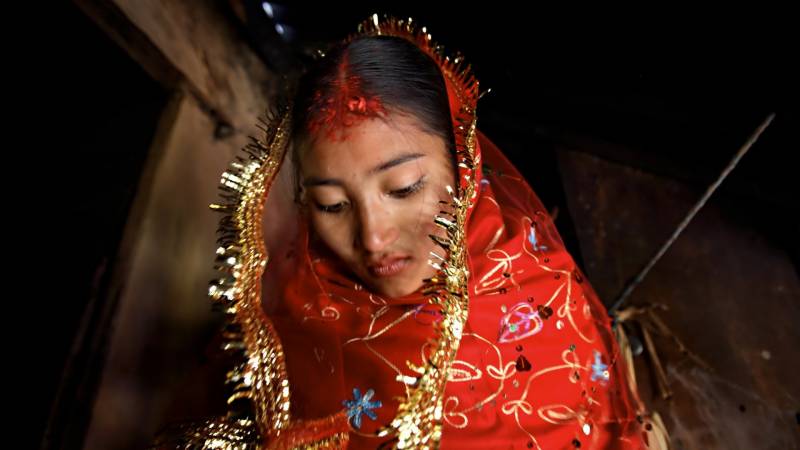 Marriage is a sacred and precious bond that ties two people together. However it is not always a bed of roses, one also has to come in contact with the thorns as well. There are several issues that acquire maturity. In such situations, child marriages are completely incompetent and a failure .Child marriage imposes responsibilities and burden on the shoulders of the spouses, which cuts shorts their childhood and infringes their fundamental rights. Underage marriage is a problem plaguing the society for centuries. Though this practice has been in decline worldwide, it is still existent in South Asia.

In Pakistan various factors are responsible for child marriages, including the social vulnerabilities along with the society’s view of family. Economically girls are seen as a burden, as it is assumed that they are unable to earn the bread and butter of the family. Many fear that delay in marriage can lead to physical relationships out of wedlock. Extremely weak legislations, lack of awareness about the harmful consequences of such marriages and, ineffective birth registration system have also contributed to the grave problem.

The problems and harm of underage wedlock are uncountable, especially for girls. The loss adolescence is one of the most obvious problems. The sudden shift in roles and responsibilities at such an early age can be a cause of great amount of stress. The time when they need support, encouragement, advice and confidence, they have to adjust to the unfamiliar environment of their new homes. They don’t get to see the world from the eyes of a child.  Girls are deprived from their basic right of education. Instead of gaining knowledge in schools; they are present in kitchens fulfilling the demands of their in laws. Girls are denied from their freedom as they become mothers, daughter in laws and wives, they are restricted to move freely. Boys at an early age are thrown into the problems of earning for the family which ruins their adolescent freedom. The idea is supported by UNICEF that most girls in forced marriages become socially isolated and they are surrounded by the people who endorse their condition.

A girl child is vulnerable and she is more prone to psychological distress because of detachment from family after marriage that too at a very tender age. Many women get depressed and become isolated. They suffer from insomnia, lose the desire to eat, find it hard to focus on things, and feelings of guilt, their self-esteem is also decreased following the incident. The issue of child marriage raises several health concerns. Their physical and mental immaturity can lead them to depression sepsis, obstructed labor, HIV, etc. It is reported that girls who get pregnant under the age of 15, have five times greater chances of dying. Many women have attempted suicide as they struggle to adjust to the new environment.

The Child Marriage Restraint act 1929 is ineffective as it says that the police cannot intervene in the matter and Sharia Law is to be consulted.  According to the UNICEF, a marriage under the age of 18 is defined as child marriage. However, in Pakistan it is legal to get married at the age of 16.

Efficient laws should be devised and implemented that allow 18 to be the legal age of marriage. Lawmakers must recognize that when girls as young as 10 are married off, they will drop out of school, suffer domestic violence, have complicated and fatal pregnancies and never find a way out of the cycle of poverty and inequality. We as a society need to stand up and eradicate such vile practices that deprive children of their human rights.

SAY NO TO CHILD MARRIAGE.