'Boasting a manifesto that ranks better than that of PML-N, PPP and PTI according to independent evaluator PILAP and a young team of volunteers who have stood steadfast and resilient against all obstacles' 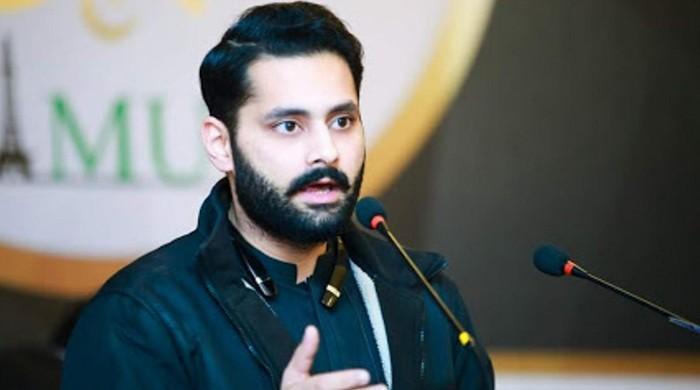 As Pakistan heads towards  third  general election in a row, election campaigning in the country enters its final stages. In an election which has widely been reported to be a victim of micromanaging and political engineering, there are two major political forces that are at spearheads with each other. One is labelled as a darling of the establishment whereas the other is touted to be their biggest victim. However, one thing that is common to both is their bigoted misuse of religion for political purposes and the recent alliances they’ve made with proscribed organisations to win votes. Be it Captain Safdar who went on a hate tirade against Ahmadis on the floor of the parliament, Asad Umar who met former head of a militant group Maulana Fazl Ur Rehman Khalil with an apparent motive of winning votes.

Amidst this battle for influence of power by hook or by crook by the main political parties, a young politician aged 31 is fighting elections independently for the second time in his life from one of the most hotly contested seats in the country.

Mohammad Jibran Nasir contesting elections from NA-247/PS-111 in Karachi blatantly rejects using religion to win votes, which has resulted in him being attacked thrice by mobs affiliated with religious party. Furthermore, he has been alleged of being an agent of Jews and non-Muslims.

The reason for this is straightforward. Jibran also led the civil society movement against Abdul Aziz of the Lal Masjid, when the cleric refused to condemn the December 16th attacks. Subsequently, he has been leading to a number of cases filed against him. Such a brave and principled stand is admirable at a time, when political parties don’t think twice before using religion to advance their own political goals.

However, standing firm against religious bigotry has not been his only achievement. Jibran has taken up high profile cases involving feudals such as Shahrukh Jatoi, police officers such as Rao Anwar and that of Khadija Siddiqui. Furthermore, he has also been involved in philanthropic activities through his organisation Elaj Trust, and was at the forefront of providing relief to the victims of Mastung and Parachinar attacks. Jibran also effectively led a campaign against the Indian aggression in Kashmir and the use of pellet guns, which showed photoshopped images of Modi, Amitabh Bachan, Mark Zuckerberg, etc to spread awareness about this grave violation of human rights which was covered by a large number of western media outlets.

Jibran recently also led a movement against status quo in the country, when he himself became a victim of high handedness from a protocol of a Sindh High Court Judge, which was live streamed through his social media accounts. He has also been very vocal about the sacrifices of the Pakistan Army, especially those who are part of the UN peacekeeping force. His organisation Never Forget Pakistan launched a website celebrating the sacrifices of Pakistani Army, Police and civilians fighting against extremism, the launching ceremony of which was attended by United Nations Secretary Ban Ki Moon. He has delivered lectures in world’s prominent universities during his visit to the United States of America.

The election campaign of Jibran is significant not only because of the principles and objectives he stands for, but also for the fact that a middle class individual from a good educational background has seldom tread on the treacherous path of Pakistani politics. Boasting a manifesto that ranks better than that of PML-N, PPP and PTI according to independent evaluator PILAP and a young team of volunteers who have stood steadfast and resilient against all obstacles, Jibran is a refreshing addition in the political scenario of Pakistan, which unfortunately still relies heavily on religious exploitation and populist agendas.