The widespread disenfranchisement of women voters in Pakistan 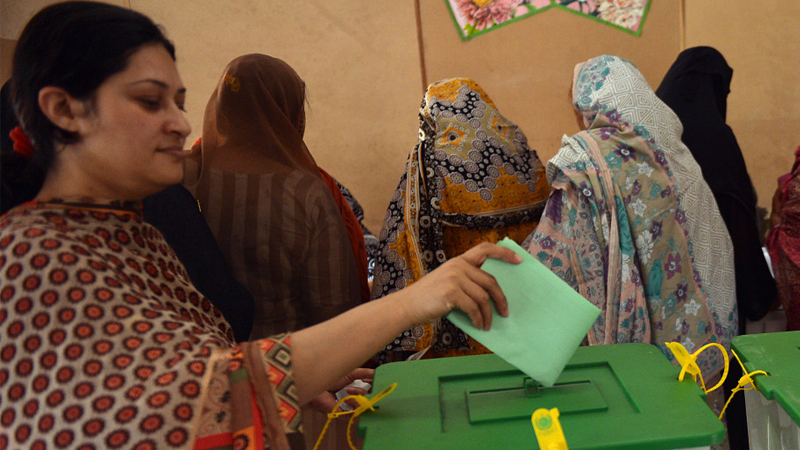 ISLAMABAD: “One star can guide a ship at sea, One vote can change a nation, One sunbeam lights a room, One candle wipes out darkness, One hope will raise our spirits, One heart can know what’s true, One life can make a difference, You see, it’s up to you!”

‘The Power of One’, a poem by Ashish Ram beautifully describes the importance of a single vote that can help select the right candidate who can benefit the city and the nation on a whole.

So far many drives have been launched to educate people about the importance of vote and to increase turnout in the upcoming general elections. In the last seven months, the Election Commission of Pakistan (ECP), National Database and Registration Authority (NADRA) and civil society have successfully registered 4,307,553 eligible women on the electoral rolls during the Women NIC/ Voter Registration Campaign. Yet women, who make up almost half of country’s population, are being ignored in the electoral process, specifically as voters.

The findings of a recent survey have revealed that a majority of women, even those residing in twin cities, cannot use their right to vote because they do not have CNICs. Women’s perceptions of themselves are also found to be one of the main reasons. In certain contexts, women may not see themselves as voters, and prefer to concentrate on domestic activities. Furthermore, women may also not feel confident or politically informed enough to register.

In this connection, Awami Workers Party (AWP) candidate Ismat Raza Shahjahan – who is contesting for NA-54 – said that issue was not that what political parties wer doing for awareness of women and registration, the issue was that women were still marginalised.

She questioned: “How women can cast their ballots according to the wish in a society where they are even deprived of basic rights and people are buying and selling vote for a meager Rs 15000.”

“Women are facing an uphill battle to make their voices heard in the political process, “she noted. She added that women candidates were also facing gaps in capacities or resources that prevent them from competing effectively.

Human rights activist Haseeb Khawaja opined that women won’t come out in great volumes unless they believe that voting or contesting would improve their lives. “Now the has greater authority to take action against attempts aimed at preventing women from voting as they can nullify the result of any constituency where women’s votes are less than 10 percent”, he said, adding that the percentage must be increased to 30 percent in the future.

As many women cannot participate in decision making process owing to cultural constraints and lake of education, Rubina Bhatti of Youth Development Association said that specific measures might be required to overcome the barriers of gender discrimination.

She maintained that political parties’ leaderships must be aware of the value of women voters and tailor issue-based political campaigns. “When maximum people exercise their right to vote, better leadership will be elected, which will certainly bring a positive change.”

According to most recent report of the Centre for Investigative Reporting in Pakistan (CIRP), the ECP voters’ data shows a glaring difference between registration of male and female voters in the country. The data shows that voter gender deficit mark is over 12 million. Out of total 97 million registered voters, 54.5 million are male and 42.4 million are female; whereas the remaining few registered voters are transgender people.

Disenfranchisement of such a huge number of women is not only violation of their constitutional right to vote but it also reflects low status of women in our society.