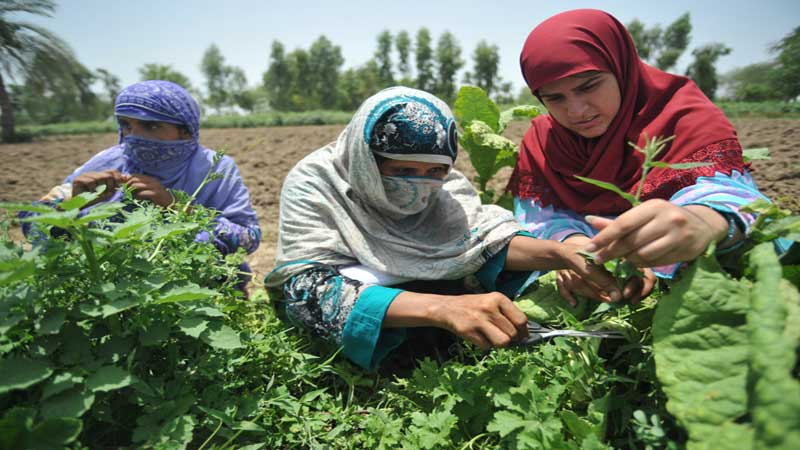 ISLAMABAD: The situation of unpaid women labour force in rural areas of Pakistan is very alarming as there are 67 percent women involved in agricultural work in the rural sector while 60 percent of their work is being utilised as unpaid, revealed a Rural Women in Pakistan Status Report 2018 launched on Thursday by United Nations Women.

According to the report, the ratio of unpaid working ladies in agriculture is much higher than other sectors as 67 of them are engaged in agricultural work in different sections including 46 percent farming, 60 percent in livestock.

A 32 percent portion of women employment is in non-agricultural sector including small industry at homes, arts and other jobs, but the reward of such labour force to women is also zero, as per report.

Surprisingly, despite all claims from each government the women literacy rate could not be increased significantly as much as the authorities claimed.

As per the report, college education is a catalyst for women to enter into the formal, paid employment while only 3 percent rural women have college degrees and 57 percent of them are employed as primary teachers. The average wages of these women are Rs 16,000 per month.

The report stated that if comparisons are to be made, the number of unpaid working women in villages is more than the paid ones.

The report also stated that only one percent women are entrepreneurs in the country while 20 percent rural women are classified as own account workers. Support for microenterprises has also remained limited to low return skills and enterprises with average loan size of Rs 25,000 per woman which fails to accommodate more women.

It was highlighted in the report that the National Financial Inclusion Strategy has been launched with an aim to provide easy access to financial services to at least 50 percent of the adult population and 25 percent of adult women by 2020. Currently, however few women and especially rural women, have access to such services. Rural women are not prepared to cope with the changes resulting from urbanisation, climate change, environmental degradation and shocks and technological innovations.

It said that the returns to education can be higher in rural areas for women, given the inroads being made through technology and the creeping urbanisation where rural markets are no longer.

The status of over overall literacy for rural women is also very low. As per report, the literacy rate among the rural women between the ages of 15-64 years is 35 percent while this ratio among the urban areas is 69 percent.

Moreover, the male literacy rate in rural parts is 63 percent which is almost double that of rural women and also questions the authorities who claimed to decrease gender parity in respect of education.

The UN Women recommended in the report that connectivity, education and skills training, value added work additions, land rights reproductive rights, freedom, threat of violence and China Pakistan Economic Corridor (CPEC) can be game changers for women, if they address their needs and policy actions are matched by resources and implementation.

It suggested that technology has the potential to change women’s lives drastically whether it is for easing domestic burden through labour saving devices, or improving agricultural work through tools and equipment.

Besides, it recommended that skills training, outreach and content, has to shift from its current focus on women’s reproductive roles and view them as major contributors to the economy. Trainings in value added outputs based on current work done by women, linkages to private sector investors and financial institution is needed.

Not only this, it suggested that climate change policy must be gender sensitive and nuanced to cater to the diverse geographic and topographic areas of Pakistan and the livelihoods of the communities therein.

“Strategies and action plans are needed to address the needs of rural women and they should be included in mitigation and adaptation strategies. Women should be involved at multiple levels of policy making and planning related to climate change,” the report said.

It was hoped that CPEC will connect rural populations and has the potential to improve rural women’s economic and social status, provided the planning at this stage is rigorous and evidence based with social and environment impact studies that assess the possibility and potential of change and the mitigation strategies for any adverse impacts.