* Bilawal says a weak democracy is better than a powerful dictatorship 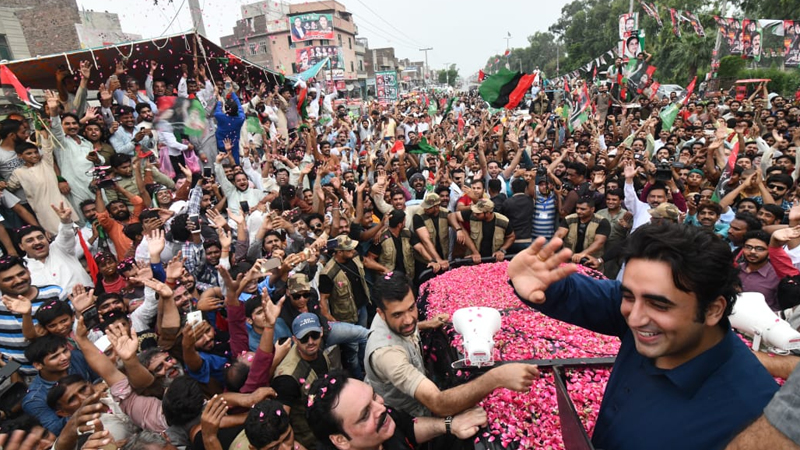 During a press conference, Bilawal said that the two so-called political parties – PTI and PML-N – had taken Punjab’s politics hostage. He said PPP wants to make institutions and the system stronger. He said that an alliance can be made with those who are close to PPP vis-a-vis party manifesto. He said in the past alliances have always been made against the PPP. He reiterated that a weak democracy is better than a powerful dictatorship.

Responding to comments by Pakistan Tehreek-e-Insaf (PTI) leader Shah Mehmood Qureshi, Bilawal said Qureshi was present when the Charter of Democracy was signed and he knows very well that its aim was to strengthen the democracy. He asked Qureshi what his present party stands for other than making a mockery of the political system.

The PPP chairman repeated his invitation to those parties interested in altering the charter’s principles according to the present times.

Later addressing a reception in Faisalabad, Bilawal said that the PPP believes in principles, ideology and service to the people instead of sowing seeds of hatred among masses. “I have entered politics with the sole objective of accomplishing the unfinished mission of Zulfikar Ali Bhutto and Benazir Bhutto,” he said, adding the PPP had no enmity with any political party. “Our objective is to win elections in order to mitigate the sufferings of the people.”

He said that the PPP had still its roots among the masses and the people of Pakistan by stamping on ‘arrow’ on July 25 would prove that Bhutto was still alive. He said that the PPP could not be eliminated from the national politics as it wanted to end hate from all ranks of society. He said that the PPP was not fighting against any party but it was striving for elimination of public hardships and people’s problems. “We want to provide quality education and health facilities at doorsteps of people besides eradicating menace of the poverty and unemployment,” he said.

“After coming into power, we will provide interest-free loans especially to the poor rural women so that they can start their own business and play role in stabilizing the national economy,” Bilawal announced.

Bilawal said he is sending a message to those elements who attempted to discredit the PPP. “We would like to give a message to those who are thinking that by martyring Zulfikar Ali Bhutto and Benazir Bhutto they can finish off the party, but we will not let this happen,” he said.

Bilawal said it was not just start of his political career but rather a lifelong struggle to serve the people, which was also their tradition. He said that he has come to carry forward the vision of Benazir Bhutto and solve the people’s problems.

He said the PPP will introduce a poverty reduction programme to provide employment to women in order to enable them become contributing members of the society.