PM declares Sunday mourning-day, as victims of the blast are laid to rest

The interim government has announced Sunday as a day of mourning as the death toll reached 131. 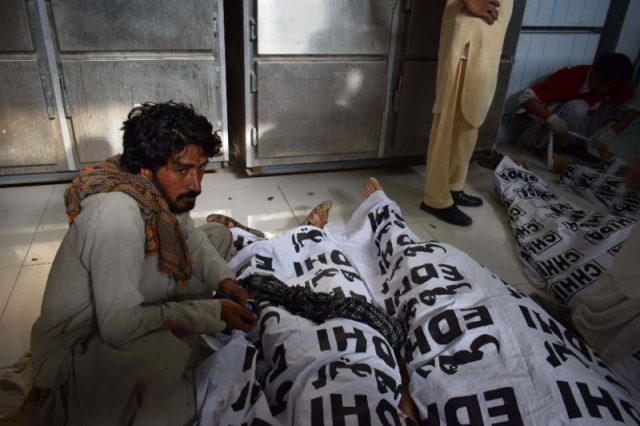 QUETTA: The interim government has announced Sunday as a day of mourning as the death toll reached 131 in Mastung blast.

On Friday the blast at Mastung resulted in the loss of 128 lives, including Balochistan Awami Party candidate Nawab Siraj Raisani.who was running for a provincial seat.  The other three were unable to withstand wounds and gave up life on Saturday.

Interim Prime Minister Justice (retd) Nasirul Mulk declared Sunday as a day of mourning to pay regards to the lives lost in the recent streak of terror.

Authorities said that the suicide bomber exploded himself in the middle of a compound where the political meeting was taking place. This blast was heinous of all that came hours after four people were killed and 39 injured in a bomb blast targetting a JUI-F convoy in Bannu.

The BAP has also cancelled its election rally in Quetta today in memory of the deceased. The national flag will be hoisted at half-mast.

The Pakistan Tehreek-e-Insaf cancelled its rally scheduled for July 17 in Quetta, while the Pakistan Peoples Party has called off its rally in Batkhela today.

Authorities said on Saturday that evidence is being collected from the site of the attack. The authorities will take assistance from the Punjab Forensics Laboratory to probe the attack.

Nawab Siraj Raisani was laid to rest in his ancestral graveyard in Mastung district in Balochistan late Saturday, near the graves of his father Nawab Ghaus Baksh Raisani and his son Mir Haqmal Raisani.

The attack was condemned from various quarters in the country and worldwide.

CAOS expressed sorrow over the loss of innocent lives and vowed that attempts of evil forces to derail important democratic activity shall not succeed.

Although overall violence has ebbed in Pakistan in recent years following an army offensive on militant strongholds in the northwest, both the Pakistani Taliban and Islamic State still launch attacks from across the border in Afghanistan.