Will you dare cross the bridge linking Bhara Kahu to QAU? Think twice!

* This bridge is very important and is mostly busy as people of Bhara Kahu, Kot Hatyal, Shahdara, Malpur and QAU students use it regularly 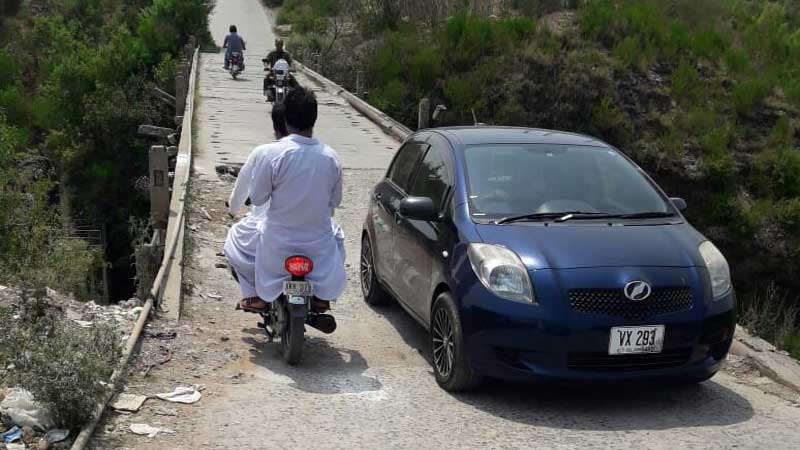 ISLAMABAD: The linking bridge of Bhara Kahu to Quaid-i-Azam University (QAU) and Bari Imam Shrine is in dilapidated condition owing to negligence by the concerned authorities.

The broken bridge has been posing serious risk for motorists as it could fall anytime.

This bridge is very important and is mostly busy as people of Bhara Kahu, Kot Hatyal, Shahdara, Malpur and students of QAU use it regularly. Whereas, during rush hours on main Murree Road at Bhara Kahu, people of Murree and Azad Jammu & Kashmir also use this bridge and road as bypass to reach their destination without any hurdles.

Having said that, the bridge, despite its frequent usage, is in a dangerous state, as the safety pillars on either side are broken; there are a large number of cracks which can also be observed on the surface of the bridge, and this can result in a big mishap anytime.

Residents of nearby areas, while talking exclusively to Daily Times said that despite many complaints, the authorities concerned, ie Metro Corporation Islamabad (MCI) have not taken any action to repair this bridge in order to avoid any tragedy.

Fahad Ali, a resident of Kot Hatyal area said, “We are in fear that the bridge could collapse any moment.”

He said that the bridge is constructed on the Shahdara Nullah and is very high heighted and elevated and in case of any accidents, there will be very less chances of survival.

“It seems, the government department is waiting for a mishap so they could finally take action,” he said.

“I am often used this bridge when I have to buy groceries from Bara Kahu Bazaar but we know it is very risky to cross. Even then, I have no other option except to cross this dilapidated bridge because this is the shortest route,” said a female hostelite of QAU, requesting not to be named.

A resident Khot Hatyal, Idrees Abbasi, also while talking exclusively to Daily Times, said that the concerned authorities are well aware of the condition of the bridge but they are not doing anything practically. He appealed to them to take necessary actions of the repair and maintenance of this dilapidated condition to avoid any mishap.

“Even our children regularly use this bridge to reach QAU’s premises so they can play in the university’s public lawns. From the moment they leave and until the moment they come back, we are worried about their safety and well being,” he said.

He also held responsible the local government representatives for not paying any attention towards this serious and life threatening issue, despite of many appeals of locals to get this bridge fixed from the government.

When contacted, Chief Metropolitan Officer Syed Najif Iqbal of MCI admitted that the MCI was well aware of the dilapidated condition of the bridge.

He said that MCI has been regularly receiving complaints from people regarding this bridge. “We will repair this bridge very soon,” he said and added that another such bridge in Lehtrar area will also be repaired soon.