Mission of improving the education in Thar 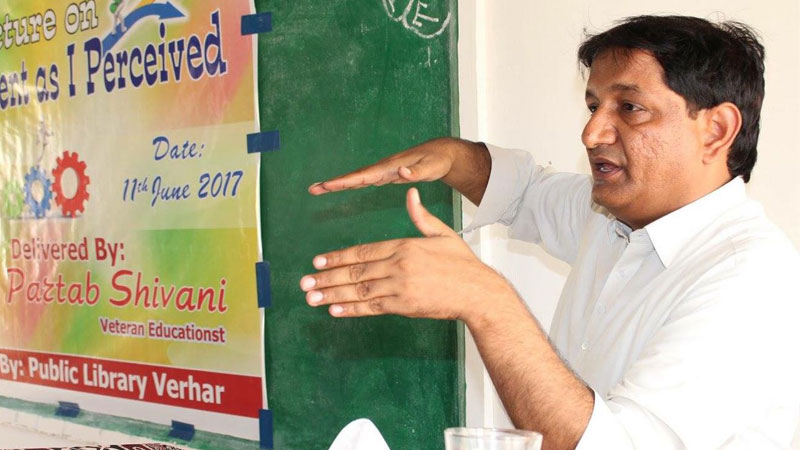 State is investing heavy grants and budgets to change the ecology of Thar by digging coal from the land and development in corporation sector.People are globally connected with the access of internet and locally engaged by their local profession and routine based work, but the situation of education is alarming, the performance of government school is in critical condition, political interference in institutions have changed the scenario of behavior science, teachers mafia is highlighting issues which are only concern with their own interest despite to support and to take the stand for the way forward for education landscape of Tharparkar.

Introduction: Partab Shivani hails from rural village of Thar Malnhore Vena , his father is carpenter .He started primary and middle education from village secondary from Mithi and Higher secondary from Mirpurkhas and graduation and post-graduation from SAU Tandojam .He, later started Star English Institute by 2004 at Mithi. It performed exceptionally in the area. Actively played his role in child rights committee and awarded Best Child Right Activist award by SPARC in 2009. He represented Paksitan in Globe March against child labor. He founded Skill Enhancing and Research home of the children (SEARCH) and worked on different formal and technical education across Sindh. Currently, he is work ring as Chief Executive Officer of Thar Education Alliance and working on Girls education, learning out comes, budget governance and different relevant issues.

What are your strategies to overcome the deficiencies of education in Thar?

I feel, education could only be improved when we make accountable to policy makers. We ask representatives that what plans and strategies they have in their minds to improve the education status of Thar? Though billions have been invested either by government in development sector but as there is not any specific directions, thus all went in vain and there is none visibility of any model village in area . No doubt, it is integrated issues but have to be primarily tackled by parliamentarian and then community should have to play their due role

Thar has remained a focused area for international donors and mainstream media then what are the reasons behind the unavailability of access in education ?

Agreed, Thar has been at Headlines of different local, national and international media but always Thar been presented as poverty stricken, remote and malnutrition . A decade back Thar was entitled as sought hit area. Since last few years Thar has been passing through rapid transitions, but have never been showed any positive perspective. First time through Thar science Festival we showed the talents of Thar , we have talent so rather than begging and asking for wheat by and again I have vision to make educated Thar. If we would look and donor based approach, though many organizations have been working since decades and have given voice to the voiceless but if we become calculated then would see the result what we invested. There is need of accountability across the board.

People believe that by establishing private academic institutions the intelligence approach and social psyche will change, what do you think?

Private sector is not solution, they don’t have such infra structure, salaries and other things but need vigilant monitoring mechanism. Here in Thar I don’t see any private institutions is English Medium, have not even good English language and computer centers. Look, when students at village, numbers of girls schools are just 24% of total numbers, 91% schools cater only primary education. There is no any career counselling system. The main thing which I feel the low teacher to student ratio. Here we have teachers who don’t study and update themselves this they couldn’t produce model students but herd without any fixed destination. See, 80% schools don’t have science labs and those which have labs are not adequately used.

Developing countries are concentrating on vocational trainings and subject specialization to produce expert cadre, and in Thar, development sector is introducing advance methodologies, any advancement in schooling system?

World is moving towards technologies as they are so advanced. Technical education has given new paths to generation even we find many people earn from home but here technically has not been implanted properly. We rush to make things without any calculated plans. Just see after 18th amendment government of Sindh has not yet developed any policy documents but shared number of plans. Always plans come later but here we think and intend to go with world without any directions, we are wild on all disciplines. We want to cover the gaps of fourth – fifty years in couple of years so obviously we can’t. Sindh Education Sector Plan was introduced in 2014, had many milestones but what achieved. We completely failed in MDGs but we didn’t late to sign SDGs.

As the issue of Thar, 64 trades were introduced by TRDP few years back there is need to make proper strategy as per the plan. As numbers of the corporations are heading towards Thar, they would need skilled persons but we don’t have. To make any startup of the project, must have to make baseline of the area and here you see the educational scenario and see the development. Investment is being on infra structure mainly for networking but not for Human Resources.

Is there any wondering journey or your efforts for the education of Thar?

Indeed, I have remembered the time when I started to work for education, I used to spend number of hours for study, if I have even just an hour class but used to give three four hours as knowing more and more and less and less is proper theory for understanding things. Introduced child friendly atmosphere , drove campaign against punishment , discouraged copy and tuition culture , boasted up youth through awards , exposures were given to them , involved students in decision making process , had given right to select their teachers , doubled salaries in private schools system , introduced norms and attitude , counselled parents to think out of box and invest for children , extra curriculum activities were at peak , trained parents , teachers and students for better future of generation , awarded best teachers , worked day in and day out for education. I wish all youth should have to come forward and ask for that. As its election time, every candidate comes at your door steps, need to ask them what they have done for education, what they agenda to do in future?

By criticizing government only, is it possible to enable reforms?

Blaming the government only, is not a solution we all are equal responsible for that. There is need of coordination among all stakeholders as must have robust data and make working Strategy , avoid to duplication besides this have make bound to representatives as to work for policy . All stake holders should be at one page and make five years plan. Targets to be set and transparency at priority.