* The eight-episode series is India’s first Netflix original, and directors Anurag Kashyap and Vikramaditya Motwane have taken full advantage of not having to answer to Indian censor boards 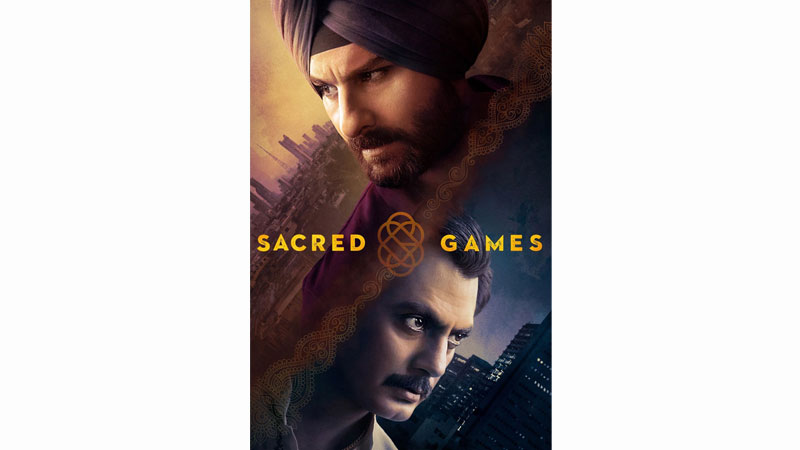 Sacred Games (SG) is not your typical Bollywood rom-com. For starters, the series’ opening scene shows a small dog that has been thrown from a high rise building fall to its death, splattering into a bloody mess. It also almost has enough explicit nudity to rival HBO’s ‘Game of Thrones.’ The eight-episode series is India’s first Netflix original, and directors Anurag Kashyap and Vikramaditya Motwane have taken full advantage of not having to answer to Indian censor boards. Released on July 6, the series is based on Vikram Chandra’s novel of the same name. It already has a 9.4/10 rating on imdb.com and a 91 percent rating on Rotten Tomatoes. Its script is in Hindi, Marathi, Punjabi and English, making subtitles mandatory. Speaking of language, this show is full of Hindi/Urdu swear words that Pakistani and Indian audiences aren’t used to hearing on television. One particular B-word pops up quite frequently.

SG stars Saif Ali Khan (a household name in Pakistan, unlike the rest of the cast) as Inspector Sartaj Singh, an honest cop in the overwhelmingly corrupt Mumbai police force, and Nawazuddin Siddiqui (Gangs of Wasseypur) as Ganesh Gaitonde, a sociopathic crime lord with regrets. The other most prominent character is Anjali Mathur, played by Radhika Apte (Pad Man), a RAW intelligence analyst whose opening scene shows her taking notes as a video of Baloch insurgents sharing Pakistani intelligence plays on her laptop. RAW has a major role in the show’s plot, and the ISI is also mentioned a few times. Whether ‘our guys’ have a major role in a conspiracy that unfolds as the plot progresses is not clear by the end of the first season, so luckily we are still in politically neutral territory.

RAW has a major role in the show’s plot, and the ISI is also mentioned a few times. Whether ‘our guys’ have a major role in a conspiracy that unfolds as the plot progresses is not clear by the end of the first season

The vast majority of the series is set in Mumbai. Most of the time, it keeps out of the posh parts of the city. Mostly its garbage dumps, slums and cheap restaurants. One of these restaurants was the Hindu Hotel, where a young Gaitonde who is working at the establishment as a waiter when he first comes to Mumbai, successfully has his boss beaten by an angry mob by hiding chicken bones in the rice. The Hindu Hotel was a hotel for high caste Hindus, thus only vegetarian food could be served. The plot features a fair bit of commentary on how religion and caste are exploited in Indian society, including Gaitonde’s remark about how chicken bones could cause more chaos in a restaurant meant for kattar Hindus than any gangster. There is similar commentary on politics. A Congress party member has already filed a complaint against the series in India for being disrespectful to Rajhiv Gandhi.

This is all comfortable territory for co-director Anurag Kashyap and Nawazuddin Siddique. They worked together when making ‘Gangs of Wasseypur’ first and second part in 2012, and gave audiences a riveting five and a half hour gangster epic. This time it’s no different, except there’s even more content. Eight 50 minute episodes gives the writers time to delve deep into numerous characters and plotlines the way no movie can. So what we have on our hands here is the India’s answer to shows like ‘Narcos’ and ‘Breaking Bad.’

And the results are good. Nawazuddin’s portrayal of Gaitonde is mesmerising. Saif Ali Khan does a very good job as well. Top notch acting combined with a gripping script, hypnotic score and beautiful cinematography make for a gripping TV series. If you like this show, you will probably binge watch all the episodes in one go if you can.

That’s not to say the show is perfect. Radhika Apte’s performance was a bit lacking, especially in comparison to the rest of the cast. A certain Afghan character’s timeline doesn’t seem to make any sense. There are a few instances when characters make odd decisions just to push the plotline forward and at times the excessive cussing and nudity can seem slightly forced. Much of the dialogue will also be lost on audiences outside the Subcontinent because of the poor translation of the English subtitles.

Regardless, the show has been very successful thus far, and I believe it deserves it. I certainly enjoyed the show a lot, and hope for a second season very soon. That it is being well received means that more Indian stars will be willing to experiment in this medium, meaning Indian showbiz could be on the cusp of a new era. Hopefully Netflix will allow Indian talent to put out more content that doesn’t revolve around sappy love stories. For Netflix itself, SG is yet another addition to an increasingly vast library of original content that will allow it not just to grab a bigger share of the Indian market, but also help international audiences better understand the history of India and the issues faced by it’s society, including corruption in the police, connections between organised crime and politicians, as well as the communal strife between Hindus and Muslims.