Everything we know so far about the ‘Parwaaz Hai Junoon’ trailer 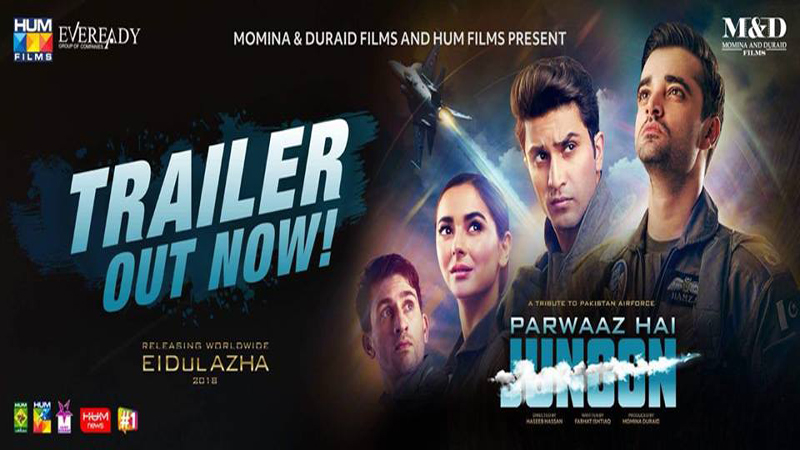 The trailer has already aroused the feelings of patriotism in the heart of every Pakistani. Helmed by Haseeb Hassan, the film is penned by Farhat Ishtiaq, produced by Momina Duraid and distributed by HUM Films.

The patriotic fervor is strong in the trailer as it seems very promising. The film is intended to be a tribute to Pakistan Air Force with stories inspired from real life.

The trailer right away introduces the lead protagonist Hania who gives up her American citizenship to join Pakistan Air force Academy. Her character is sweet and subtle who is seen being made fun of by Ahad’s character for being a girl in the air force who is afraid of cockroaches and lizards. Soon enough, in quite a dramatic manner Hamza’s character is seen wooing Hania.

The film seems to have the right ingredients for a high octane masala flick which offers a love triangle, colorful songs, dancing, pilots prepping for a terrorist mission, shots of control rooms and fighter jets piercing through the sky which indeed promise a lot of action.

Haseeb’s mesmerizing direction and the assured emotional performances of the cast, especially Hamza and Hania, draw the viewer’s attention. Though by now, Ishtiaq’s writing is powerful, with dialogues that are meaningful and believable.

‘Parwaaz Hai Junoon’ is set to release worldwide on Eid-ul-Adha 2018.