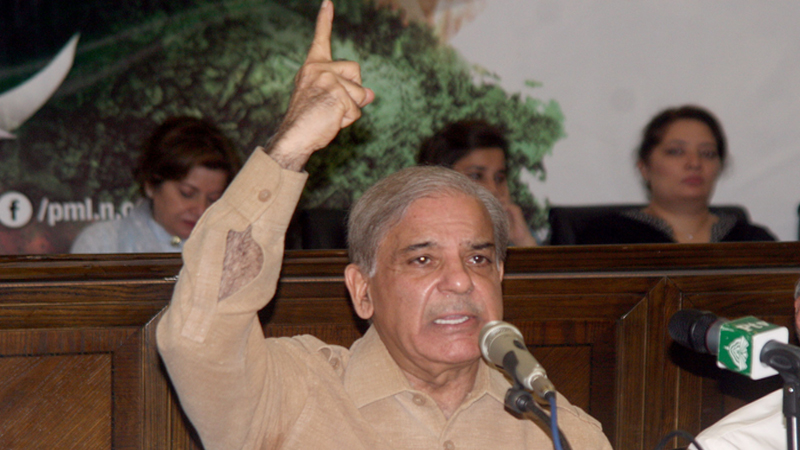 Addressing a press conference shortly after the NAB court’s verdict, the younger Sharif said, “The verdict is political; has many shortcomings and will go down as one of the worst decisions in the history.”

Flanked by senior party leaders, including Mushahid Hussain, Khawaja Saad Rafique, Hamza Shahbaz Sharif, Khawaja Ahmad Hassan, and Pervez Malik at the party’s secretariat in Model Town, Shehbaz rejected the rumours that the PML-N would boycott the elections. He asked party’s election hopefuls to continue campaign and hold peaceful protests against what he described as the “injustice” with the thrice-elected premier.

He was of the view that the decision was “politically motivated and had many lacunas”. “It would be remembered in the history as a “black judgement”. He said that all the options were open and they would adopt all constitutional and legal ways against this decision.

Formerly the Punjab chief minister, Shehbaz added that the decision came at a time when the general elections were approaching fast and termed it an “act to influence polls”.

Recounting the “achievements” of his brother, he said that Nawaz Sharif served the nation and made it an atomic powerhouse despite external pressures, and initiated several development projects.

“The gift of Pakistan’s development, CPEC, was also given by Nawaz Sharif,” he said, adding that projects like Gwadar port and a network of motorways were also provided by him. “Nawaz Sharif doesn’t deserve the punishment that he has been awarded today. His services cannot be undermined,” he said. The PML-N president further said that Nawaz Sharif had always stood steadfast and despite reservations over the provision of justice appeared in court along with his daughter for 109 times.

He announced to run a countrywide campaign against the verdict and criticised what he described as the National Accountability Bureau (NAB) “biased” approach towards the Sharif family.

Shehbaz said that Nawaz Sharif had fulfilled all the promises he made with the people before coming into power in 2013 and even his opponents could not level any allegation against him.

On an optimistic note, he said that the people would announce their verdict in the favour of the Sharif family in upcoming general elections, scheduled for July 25. “The NAB court has announced its verdict, but the court of the people is yet to deliver the decision.”