Truck art is something beyond social articulation; it's also a deeply rooted tradition that can cause a business boom for drivers 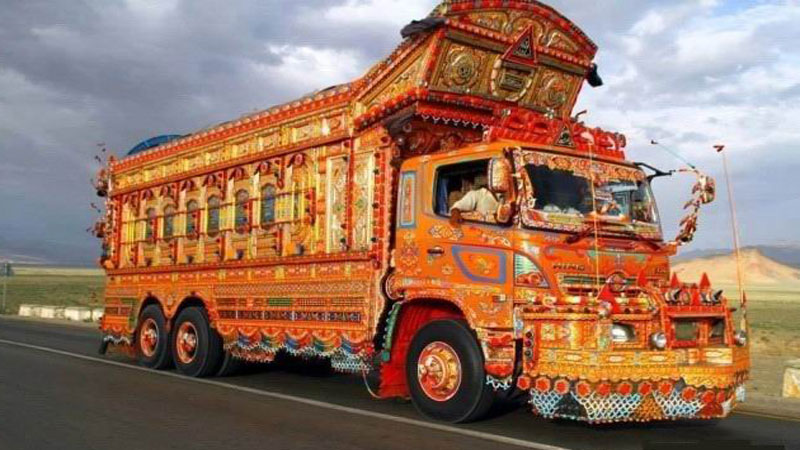 Art is not what you see, but what you make others see. If you’ve spent any time in South Asia, specifically Pakistan, you’ve most likely observed bright, resplendent trucks thundering down streets and highways. In these nations, especially Pakistan, ‘truck art’ is something beyond social articulation; it’s also a deeply rooted tradition that can cause a business boom for drivers. So what is the history behind these moving bits of art? And what is the true meaning of the amusing and bold designs that immerse these vehicles?

Elaborate designs, kaleidoscopic colour schemes, and perplexing artisan-ship, truck art is one of the most culturally celebrated forms of art in Pakistan. As Pakistanis, we adore everything dynamic and loud. Our truck art speaks all that more. It’s beautiful how chaotic designs and multicoloured palettes are incorporated to create something so detailed, dazzling, and catchy that grab the attention of the viewer immediately, just like “Gi Aya’an Nuo” (Welcome! Let’s have a journey together)

In Pakistan, truck drivers can spend up to two years’ salary decorating their vehicles with colourful and ornate art. The art is seen as a business investment, as potential clients are more likely to hire a truck that’s beautifully painted

Pakistani decorated trucks, servicing Afghanistan, came to be known as jingle trucks by American troops and contractors. In Pakistan, truck art has origins dating back to the 1920s, when Bedford trucks imported from England invaded the country’s streets. They were fitted with large wooden prows on top of the truck bed. Known as a taj, or crown, the ornate prow was also accompanied by decorative bumpers and wood paneling along the cabin. In the late 1940s, when trucks began long-haul journeys to deliver goods, each company designed a logo so that illiterate people would understand who owned the truck.

Over time, these logos turned out to be progressively ornate. “They were identifications of rivalry,” explains Durriya Kazi, Head of the Department of Visual Studies at the University of Karachi and an expert in truck art. “And the more flashy the outline, the better business became.” In the 1950s, Karachi became a hub of truck art—a title it still holds today—when Hajji Hussain, an artist known for his intricate castle frescoes, settled around the local area. Lacking palaces to paint, he turned to decorating trucks, and his ornate, floral style pushed the genre forward. 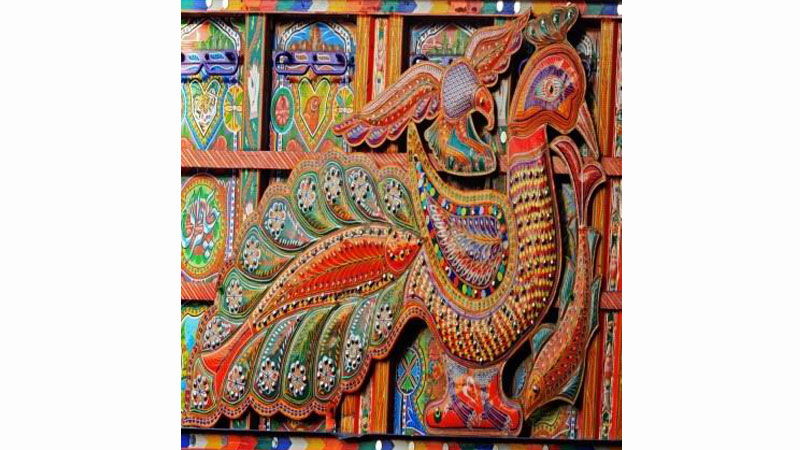 Cargo trucks painted in splendid hues, with an amazingly unpredictable level of detail of truck art designs, are a common sight on the highways of Pakistan. The paintings – often coupled with lines of poetry, religious calligraphy or common phrases – represent the truck driver’s identity and regional background. The images and motifs on the trucks embody a wide range of themes, including landscapes, celebrities, beautiful women, mythical creatures, religious imagery, and national heroes. In addition to that, poetic cantos and comic verses may also be found written on the trucks. Sometimes, chains and pendants are also seen to be hanging with the bumpers of the truck.

The décor of a truck may cost a heavy amount; drivers can easily spend up to $2,500 for a basic paint job, which is two years’ salary. And often, they’ll come back for touchups every few years to keep things fresh. However, the lovers of this art are always ready to pay for it no matter what. The components that the beautification of a truck contains, remind the truck owner/driver of his home, as they are often far away from it.

As we dig deep, we discover that distinctive urban areas of Pakistan have embraced diverse methodologies towards this art, making it even more versatile. Truck art of Baluchistan and Khyber Pakhtunkhwa is characterised by massive wood work, Rawalpindi and Islamabad by plastic work, and the Sindhi truck art mostly features red shading in truck enrichment. An expert can quickly ascertain from which city the truck belongs to, merely by taking a look at it. 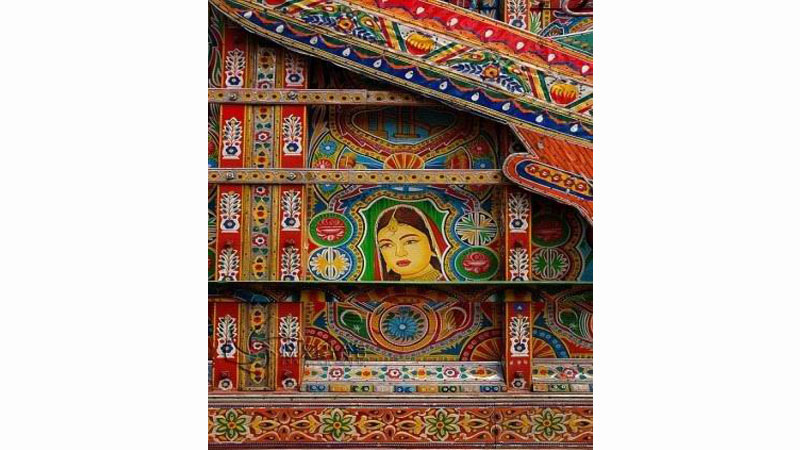 This colourful funky art is not just restricted to Pakistan; it is introduced as a significant part of art around the world. Haider Ali is a famous truck artist, hailing from Karachi, Pakistan. He has beautifully exhibited the art on vehicles in UK, Poland, US, Germany, and the United States. He also ornamented a Turkish municipal bus as a part of solidifying Pak-Turk bilateral ties and to promote cultural friendliness between the two countries.

The lively colours and sparkling patterns of truck art have remarkably inspired a number of fashion designers as well. In its 2015 campaign, the famous fashion company Dolce & Gabbana used such displays which could clearly be seen as influenced by Pakistani truck art.

Truck art is not just an art anymore. It has become an enthusiastic love for culturalism and symbolism, which has transcended the territorial limits of Pakistan, to be praised and acknowledged internationally