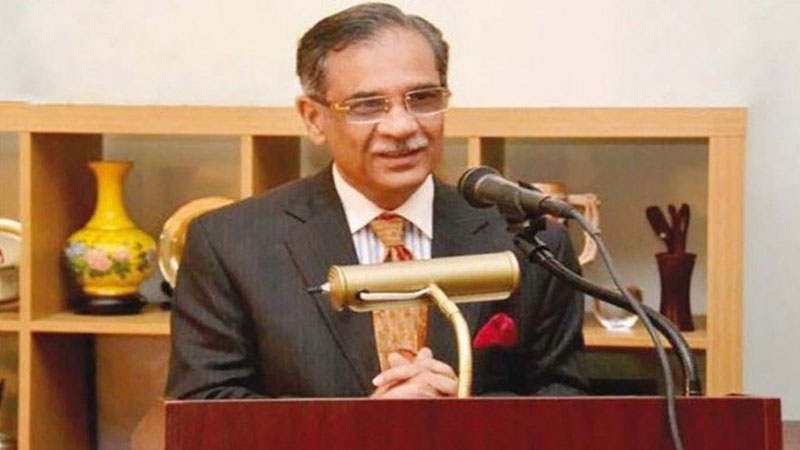 The Supreme Court on Wednesday directed the Inter-Services Intelligence (ISI) to specify a date for removal of blockades from the main public road in front of its headquarters (HQs) in the federal capital.

A three-member bench headed by Chief Justice Mian Saqib Nisar, however, suspended an earlier order of the Islamabad High Court (IHC) to the ISI to remove blockades and clear the main public road in front of its headquarters within a week and submit a compliance report.

Earlier on June 22, while hearing a petition against the encroachments in the federal capital, IHC’s Justice Shaukat Aziz Siddiqui had directed the ISI to clear the portion of Khayaban-i-Suharwardy in front of its headquarters until June 29. The defence ministry, however, had assured the IHC that it would clear the road within four weeks.

On July 3, Justice Shaukat Aziz Siddiqui issued show-cause notices to four defence ministry and ISI officials when they refused to sign an order sheet in which the court had incorporated an undertaking that the agency would clear barricades and encroachments on the Khayaban-i-Suharwardy in a month. The court had also summoned defence secretary and ISI director general to appear personally on Wednesday.

The court directed Deputy Attorney General (DAG) Nayab Gardezi, who was present in the court, to ask ISI why it had erected blockades on Khayaban-i-Suharwardy and closed it and that when it will remove the blockades. The court noted that the road was part of Islamabad’s master plan and directed the DAG to present the master plan of the federal capital in the court.

The chief justice noted that the apex court has already passed orders against encroachments on public lands all over the country. He made it clear that these orders are also applicable on the ISI. He asked the DAG to also inform the court that why this road had not been opened for public despite clear orders by the court. He said this road has to be opened at all costs as its closure is causing trouble to the public. The DAG stated that the road was closed by the ISI due to security concerns. He requested the court to allow some time to clear the road, as there were security concerns which had to be addressed first. He, however, stated that when the road was closed, an alternative road was built and allotted to the ISI by the Capital Development Authority (CDA).

When the court asked the DAG to submit an affidavit about removal of blockades, he stated that he was unable to give any such affidavit without taking instructions from the officials concerned. The court responded that it had already given orders for removing encroachments and directed the DAG to take instructions and apprise the court.

Meanwhile, the court adjourned the hearing until Friday.

Earlier, the IHC had observed that neither any resolution had been passed by the CDA Board nor any formal permission accorded to the spy agency to block the main road for security purposes. Ministry of Defence Senior Joint Secretary Younas Khan conceded before the IHC that due to security reasons the road as well as a 40 kanal greenbelt had been blocked.

The spy agency closed the road a few years ago when terrorists were targeting important security installations. According to the defence ministry, there were enormous threats to the ISI headquarters.