Another term for Erdogan: He’s popular among his people. No matter how much you dislike him 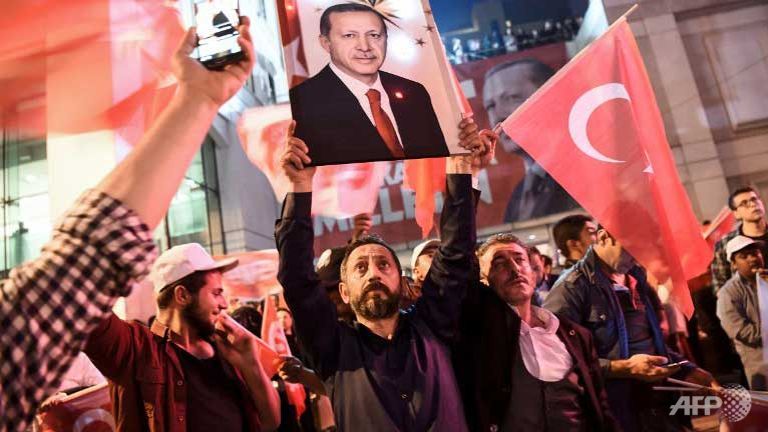 The people of Turkey have spoken. Turkish President Recep Tayyip Erdogan has won one of the most fiercely fought Turkish elections of recent times. After leading the country for last 15 years, first with two terms as prime minister and, since 2014, as president, he has now fought off his biggest challenge till date to secure the presidency along with a complete control of the parliament.

Mr Erdogan had won nearly 53% of the counted votes against his main opponent Mr Ince, who secured just 31% despite the presence of huge crowds during his campaign. Erdogan’s AK Party won 53% of the seats with its allies in pole position with a majority of 343 seats out of 600-seat assembly. The opposition CHP and its allies got 33% (190 seats). The pro-Kurdish party HDP is back in parliament with 67 seats and will continue to create headaches for the government through their tough stance.

Erdogan is a popular figure in Turkey and even in countries like Pakistan but the country remains polarised. He has led the country to a strong economy and developed infrastructures but he is often criticised for cracking down on his opponents and curtailing the freedom of press. Since the failed coup of July 2016, he has put more than 160,000 people in jail. Since the attempted coup, 107,000 people have been dismissed by emergency decree including soldiers, police officers, judges and teachers. More than 50,000 people have been imprisoned in a pending trial while 1010 have been allowed to work after their cases have been reviewed.

The elections were due in 2019 but he called the snap elections because of worsening status of Turkish Lira which has slumped 17% against the dollar. The economy has been growing at a rate of 7.4% but the fall of the currency has been a big worry for the people. Another important issue is that of the inflation which currently stands at 11% and might increase despite attempts to pressure central bank to control the interest rates.

This elections result gives him the power to directly appoint top officials like ministers, vice presidents, military heads and top bureaucratic positions. He can intervene in the country’s legal system, propose budget and impose an emergency.

Under Erdogan’s leadership, Turkey has moved away from the total secular approach which dominated its politics in the last century. The country is now embracing a more moderate policy toward Islamism like allowing female state employees to wear headscarves.

This victory gives him a clear lead to implement his new reforms which will turn the country into a strong Presidential form of government. This elections result gives him the power to directly appoint top officials like ministers, vice presidents, military heads and top bureaucratic positions. He can intervene in the country’s legal system, propose budget and impose an emergency. The parliament can impeach the President with two-thirds of majority but ultimate decision lies with the Supreme Court, where 12 of the 15 judges will be appointed by the President.

His critics have been speaking out loud about these measures and the potential effects on the country but the results show that there is a significant support for the leader who has established a stronghold over his opponents and controls most of the Turkish media. He says that the new system and mandate will empower him to address economics issues and address the law and order situation in the Kurdish areas.

He is going to be in power till at least 2023, which will mark the 100 years since Ataturk created the modern state of Turkey. The country has come far from that point; a lot has changed in last two decades but here lies a significant/critical question. Are we seeing an Islamic revival in Turkey or that was always there and just beginning to be activated now? The army has played a major role in keeping up the secular image of the country, what if that was the oppression where the religion never really left the hearts of the common people. The pre-Erdogan Turkey is seen as an example of a great model by people in our country but almost a hundred years after the shift, Turkey is now moving back.

Another interesting fact is that while we are talking about his Islamist approach, the hardliner Felicity Party (Turkish: Saadet Partisi), founded after the Virtue Party (FP) was banned, which has been on his opposing end. They have repeatedly condemned government’s desire to join the European Union and has argued that Turkey must adapt its military and foreign policy stance to meet the rising threat from the West to all Muslim countries. They were pretty close to Jamaat Islami until recently who now sing praises for Mr Erdogan, just like most of us on social media are celebrating this victory and comparing it with our favorite political parties. Pakistan is nowhere in that position.

The elections leave numerous question marks but the most important question is whether the West will accept the power of democracy. Despite all the criticism, the Turkish people have chosen and empowered Erdogan to become the all-powerful ruler of the country. The strongest since Kemal Attaturk and that is how democracy works. We have seen that they refused to accept this in Egypt and their efforts to contain the situation haven’t gone down well. Erdogan on the other hand needs to reconnect with the 47% who did not vote for him, who do not share his ideology and are clearly divided on geographical lines. If he wants to take this country forward and achieve the economic and political situation he desires, he needs to reconcile and take the bigger step here. Interesting times for Turkey and the rest of the world.