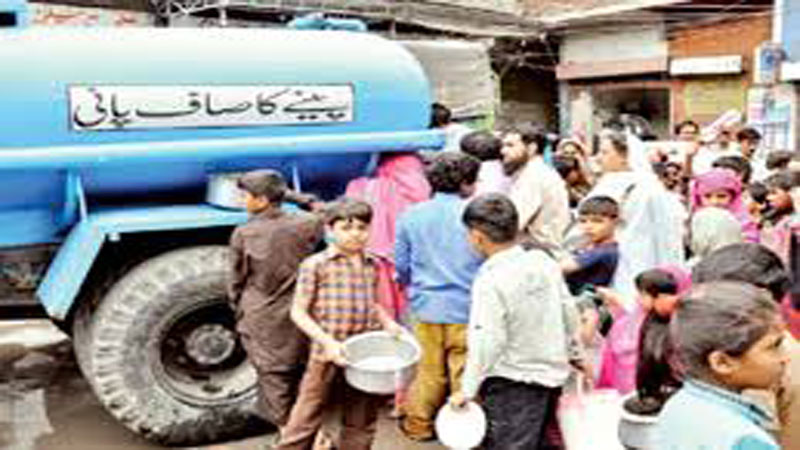 ISLAMABAD: The local government representatives on Tuesday demanded installation of two tube wells in each union council and deployment of two water tankers on disposal of union councils as short term solution to resolve water crisis in the federal capital.

The session of Metropolitan Corporation Islamabad (MCI) was held at the Pak-China Centre, which was chaired by Deputy Mayor Azam Khan to take suggestions of local government representatives, which would be submitted before a committee constituted by Supreme Court, for solution of the water shortage in the capital city.

Both treasury and opposition benches agreed that there was need for installation of new tube wells in each union council.

During the meeting, exchange of harsh words also took place amongst the members of Pakistan Muslim League-Nawaz (PMLN) and Pakistan Tehreek-i-Insaf.

Speaking on the occasion, Opposition leader Ali Nawaz while giving his suggestions said that at least two water tankers should be deployed in each union council at the disposal of UC chairmen. He said that Capital Development Authority (CDA) and MCI have failed to resolve the issue of water shortage, adding that during the last two and a half years, only two new tube wells were installed in Islamabad, which shows how serious MCI and CDA are in resolving this issue.

“Power should be given to chairmen who can easily handle the water issue. For 2.2 million population of Islamabad, the CDA has only 34 water tankers. Out of them, 17 are on road rest and not able to run,” he said.

PML-N Chairman Sardar Mehtab expressed his deep concerns over the performance of CDA’s water directorate saying that there is mafia in water directorate, which has been creating artificial shortage of water.

Chief Metropolitan Offer Syed Najaf Iqbal said this meeting was being held in the light of Supreme Court directives, as in a suo moto case, the apex court had directed MCI to submit suggestions before a committee to resolve water scarcity issue in the capital. He said that efforts are being made to get Rs 1.6 billion funds from the federal government.

“After receiving funds, we will deploy at least one tanker in each UC while we will also install 30 new tube wells,” he said and added that efforts would also be made to start stalled project of Chirrah Dam in Islamabad.

MCI members also demanded constructions of new dams in capital, saying that there is a dire need for that.

“We should opt for construction of small dams, rubber dams and check dams,” Deputy Mayor Syed Zeeshan Naqvi said, adding that on the Margalla Hills, a large number of rubber dams could be installed to store rain waters.

It is worth mentioning that currently, 61 million gallons per day (MGD) of water is being supplied to the people of the capital city by MCI instead of the actual demand of 110MGD, creating a shortfall of 41MGD. The officials of the MCI and CDA while talking exclusively to Daily Times said that 30 percent of the water is being either wasted or stolen before reaching to the main reservoir in Sector F-5. The capital city has three main sources of water: Simly Dam, Khanpur Dam and tube wells. The Simly dam is supplying 24MGD of water against the approved limit of 38MGD while Khanpur Dam is supplying nine MGD of water against the approved limit of 14MGD as water level in both the dams is on decline due to less rainfall.