It’s not just London; the Sharifs have properties in Switzerland and UAE: Fawad Chaudhry

* PTI female worker says, ‘Women have an important role in the party, but they were ignored on general seats’ 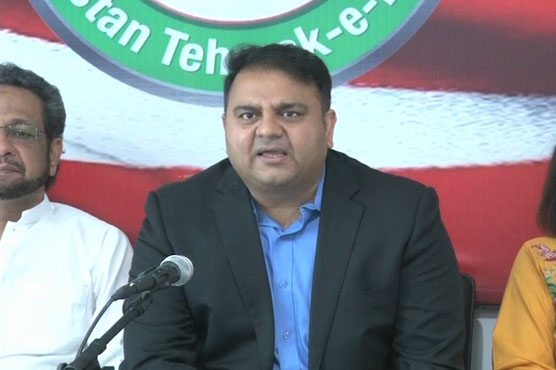 LAHORE: Pakistan Tehreek-i-Insaf (PTI) Spokesman Fawad Chaudhry has claimed that more properties of the Sharif family are exposed in Switzerland and United Arab Emirates (UAE) after the London flats and offshore companies in Panama.

Addressing a press conference at the party secretariat on Monday, Fawad Chaudhry said that Maryam Nawaz Sharif who was claiming to not hold any property abroad is now being unveiled with many properties in her name here and there.

He said that though they prayed for good health of Begum Kulsoom Nawaz Sharif, but it is the truth that former premier Nawaz Sharif who is disqualified in a corruption case is also now unearthed with having properties in Switzerland and UAE, other than the London flats.

Fawad criticised Pakistan Muslim League-Nawaz leadership, especially that of former prime minister Shahid Khaqan Abbasi, who is owner of an international airline operating in Pakistan and former finance minister Ishaq Dar who is declared as an absconder by the National Accountability Bureau (NAB) in a graft case.

Fawad demanded the registration of a case under Pakistan Penal Code against former PM Shahid Khaqan Abbasi for facilitating Ishaq Dar to flee from Pakistan to London in his airplane. He said that Dar is facing charges of money laundering worth of Rs 6 billion.

He further stated that PTI was standing with the effectees of Eden Housing Society. He raised a question that it should be informed that who is giving safe passage to Iftikhar Chaudhry from arrest. He also urged NAB to inquire about Iftikhar’s heavy assets despite his claim of not drawing salary during his stint as a Supreme Court judge.

On this occasion, he also rejected the recent reshuffling in bureaucracy, transfers and postings saying that PTI would not accept the interim Punjab government’s action as newly posted District Police Officers and Deputy Commissioners are sympathetic to PMLN so IG Punjab Police and Chief Secretary Punjab should reconsider these reshufflings.

Separately, a female member of PTI protested during a press conference addressed by Fawad on Monday after she was denied a party ticket for the forthcoming elections.

The PTI spokesman was speaking at a press conference in Lahore, when a woman stood up and began protesting over distribution of party tickets.

Fatima claimed that injustice was done in distribution of party tickets.

“Women have an important role in the party, but they were ignored on general seats.”

Addressing the party spokesman, she said, “Fawad Chaudhry sahib, you do not know me; I have been working for the party since 2006.”

The woman said that she submitted her nomination papers from Punjab Assembly constituency PP-186, but she was not awarded party ticket despite the fact that there was no contender.

During the presser, Fawad also inquired if the woman had finished.

At which, the woman said, “Fawad sahib, you raise voice for affected individuals, raise your voice for party-affectees.”

The PTI spokesman once again asked the woman if she had said whatever she had, to which, she told him that he often speaks to the media, but they rarely get such a chance.

Fatima further said that there were several senior women, who had worked for the party and they should be served justice.

It is also pertinent to note that on Sunday, PTI women wing members had also staged a demonstration outside the residence of vice chairman of the party Shah Mahmood Qureshi.

They lamented unjust distribution of tickets for the forthcoming elections, at which Shah Mahmood Qureshi assured them of addressing the issue in two days.