Civil service exams in Pakistan are discriminatory. Here’s how

When we look at the educational system that prevails in this fast-growing country, we observe that it really does not complement the level of difficulty that these exams pose. 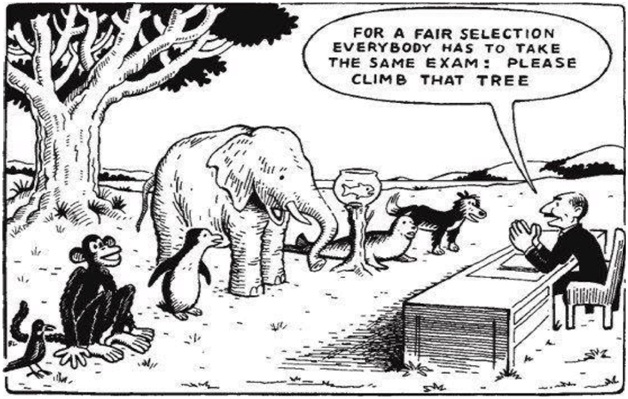 To choose applicants worthy of an equitable means, an egalitarian method was devised (i.e, characterised by the belief in equality) without running the risk of influence peddling, bribery and other concerns. This procedure of selecting deserving candidates for their respective courses is called ‘Competitive Examination’. In a densely populated country like ours, we have millions of aspirants working hard to pass these exams and get a seat in a respectable institution. When we look at the educational system that prevails in this fast-growing country, we observe that it really does not complement the level of difficulty that these exams pose.

The mechanism of these tests has positive and negative effects on the candidates who’ve gone through these exams. On the positive side, a sense of competitive spirit is fostered in the individual, the hunger for improvement is cultivated, time is built and resources are managed, patience and perseverance are developed, candidate also learn about new things and come to know about the things they weren’t previously aware of.

When we observe the negative effects of these competitive exams, we observe an increase in the levels of stress and anxiety, creativity is lost, memory learning is practiced, which does not help to obtain any knowledge, the inferiority complex of being unable to be an outstanding student, fear of losing, leads to fear of not entering the desired institution, resulting in fear of unemployment, since stereotypes say that “a good institute results in a fast and good job”.

Good governance is a key challenge for both developing and developed countries. Currently, governments are faced with increasingly complex issues, such as economic and financial volatility, internal and external conflicts, adverse demographic trends, climate change, the establishment of effective regulatory regimes and the reduction of huge infrastructure gaps. With a more educated and vocal citizenship, aware of the use of social networks and the highly vigilant dominant media, public servants are under more acute public scrutiny. Therefore, there is broad agreement among lawmakers around the world that an efficient and professional civil service is a necessary, though not sufficient, requirement for good governance in any country.

Faced with growing criticism of the inefficiency and weakening of the capacity of public officials, corruption and non-transparent decision-making, governments are promoting the ideas of an “efficient and facilitating government”, a “paperless government” and a “practical government”. In order to face today’s challenges, many countries have reformed their public administration contracting systems and are in the process of reforming the civil service examination systems to guarantee the efficiency of public administration. Some countries have adopted the concept of “mainstreaming” to foster close collaboration between the public and private sectors in order to transform the civil service into one that promotes the competitiveness of the private sector.

The civil service in Pakistan is essentially based on the philosophy of the amateur (generalist) who is perceived as the gifted lay person, going from one job to another within the service, having a practical view of the problems in the light of his knowledge and experience of the government machinery. As a result, the system is crumbling today and the politically incubated bureaucrats are accelerating.

Pakistan faces similar challenges. The main policy changes towards privatization, deregulation and rapid technological advances required different sets of skills, experience, values, attitude and knowledge among public officials. The omnipresent use of the internet has raised the level of expectations in terms of speed, quality and personalisation of the provision of public services. There is an intense responsibility on policymakers through a vibrant judicial system. However, government regulations, processes and the civil service have not kept pace with changing realities, which has led to a decrease in government effectiveness, the rule of law and the control of corruption.

One of the key instruments for induction into the civil service is the competitive examination carried out by the Federal Public Service Commission (FPSC). The civil service in Pakistan is essentially based on the philosophy of the amateur (generalist) who is perceived as the gifted lay person, going from one job to another within the service, having a practical view of the problems in the light of his knowledge and experience of the government machinery. As a result, the system is crumbling today and the politically incubated bureaucrats are accelerating.

It is very unfair to take arithmetical test from a person who has never gone through this subject, and taking legal test from a person having master’s degree in English. This system needs to be change. Candidates take MCQ books and leave their own path and start learning multiple choice questions of irrelevant subjects which take them away from their own path on which they spent 14 to 16 years of their educational carrier.

The current combined examination for the recruitment of staff does not take into account the requirement of different skills, knowledge and skill sets for various occupational groups and services. The mismatch between educational achievement and the skills required for specific occupational groups has emerged as a limiting factor in the optimal utilisation of the selected human resources. The current grouping of elective subjects has facilitated a large number of candidates participating in the so-called punctuation combinations in the civil service examination, including topics such as Punjabi, Sindhi, Persian, Arabic, Psychology, Geography, Sociology, and History of US, etc. Candidates take Punjabi-Persian, Punjabi-Arabic, geography-sociology and sociology-psychology and geography-psychology combinations.

The curricula for compulsory and elective subjects were last revised in 1981. Since then, they have never been aligned with the emerging trends in global politics, geography, innovation, etc.

The FPSC, in 2013, conducted a large study in collaboration with the Higher Education Commission and several universities to review the curricula of compulsory and optional subjects including new disciplines and adjust groups of elective subjects to provide equal conditions for all candidates and to neutralise the effect of so-called high scoring subjects. The recommendations were sent to the Establishment Division in May 2014. Many years have been passed to ensure government approval and the FPSC has only notified the revised program. It also recommended a study on the conduct of a competitive examination based on groups or a separate examination for each group and occupational service, as well as the holding of a competitive examination in two stages (selection and main). However, the relevant ministry has been slow in reforming the system.

The author is an advocate and teaches at Best Law College, Rawalpindi.