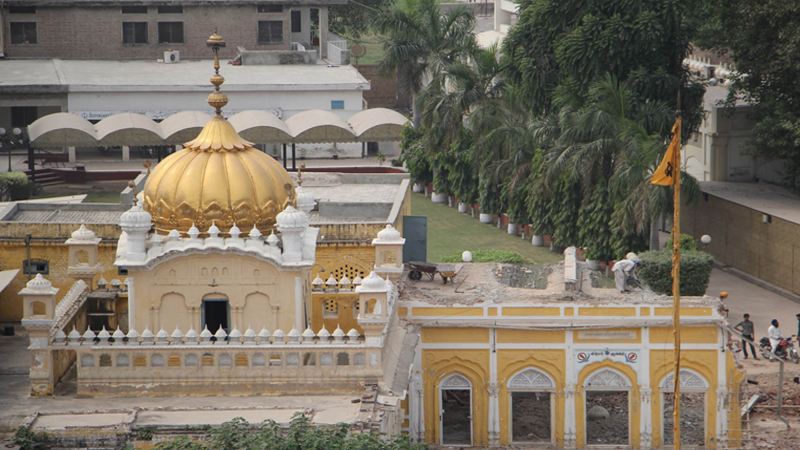 Today let me take you to a place which is much wanted to be visited by the people but the access is limited and strict. So to fulfill your desire and quench your thirst for this heritage site I am writing on the gorgeous and revered Samadhi of Maharaja Ranjeet Singh. It is located near the Lahore Fort, next to Badshahi Mosque and can be seen from the Greater Iqbal Park and Huzoori Bagh and banks upon the only existing Mughal era original Roshnai Gate. Recently, the Walled City of Lahore Authority has illuminated some parts of this Samadhi and if by any chance you are taking the history by night tours, being organised by them, you will be able to see this wonder.

I am always impressed by this site and I wish it could have been a tourist spot but I understand that due to several reasons this can’t be done but anyhow with special permission from Evacuee Trust Property Board you can see it during the day as well because the possession of this Samadhi lies with the Evacuee Trust Board. This is a functional prayer and holy place of Sikhs and some are also residing in there. The prayers are holy rituals of the Sikhs are regularly held there and hundreds of Sikh pilgrims also visit this place from all over the world. The Sikhs living inside this place are very hospitable and welcoming and if by any chance you are there at the time of Langar (free food distribution) they will offer you to taste it.

Within the area of this Samadhi long bearded Sikhs will be found reading the Granth, or the Sikh scriptures, over which is reverentially waved a fan of peacock feathers, an emblem of sanctity

While visiting the Lahore Fort you will see several Sikh structures built during the Sikh rule like Ath Dara where Maharaja held his court, the famous Huzoori Bagh Baradari, Haveli of Rani Jinda and Kharak Singh and few rooms added in the Sheesh Mahal. He built buildings utilizing elements taken from Mughal monuments. Maharaja Ranjeet Singh, the one-eyed Sikh ruler of the Punjab (ruled 1801-1839), considered himself the heir to the Mughal Empire. Among the people, he was known as Sher-e-Punjab (lion of Punjab). Few historic accounts state that even though he had conquered the citadel of the Mughals, he never seated himself on the throne in the Fort and resided in the structures he had built.

Coming to the Samadhi of Maharaja Ranjeet Singh, it is the place where his ashes were buried after the final services following his death in 1839. Its construction was started by Maharaja Ranjeet Singh’s son, Kharak Singh on the spot where Maharaja Ranjeet Singh was cremated, and was completed by his youngest son, Duleep Singh in 1848. This Samadhi, no doubt, is a masterpiece and a beautiful blend of Hindu, Sikh and Muslim architectural styles. The Samadhi has gilded domes and cupolas and a complex railing round the top. The domes glitter during the day and now with illumination they would mesmerise you during the night too and you will find pigeons flying around in the whole complex. The dome is heavily decorated with Naga (serpent) hood designs, a rich and fitting tribute to Hindu craftsmanship. The wood panels on the ceiling are covered with stained glass work and the walls have rich floral designs. The ceilings are decorated with glass mosaic work. Maharaja Ranjeet Singh’s ashes are contained in a marble urn in the shape of a lotus, sheltered under a marble pavilion inlaid with pietra dura, in the centre of the tomb.

You will be surprised to know that the Maharaja does not lie alone there. Surrounding him, in smaller knob-like urns, are the ashes of four sati queens (burned alive, as a ritual in those days, on the pyre with their husband) and seven slave girls. The ashes of two pigeons, burnt while flying over the pyre, also have their place in the Samadhi. So the Maharaja has his beloved queens, slave girls and pigeons. If you wish to go into this chamber you will have to wash your hands and feet as a ritual and respect.

Historic accounts state that the Samadhi was originally built on eight pillars but over the period of time cracks appeared in the pillars and the British government, under the orders of Sir Donald Macleod, late Lieutenant-Governor of Punjab erected thick iron rings around all the old pillars and to raise eight additional pillars. The building is now supported with sixteen pillars. Trust me it is an amazing structure beyond belief. At present the langarkahan is also being extended to accommodate the increasing number of Sikh Yatrees. 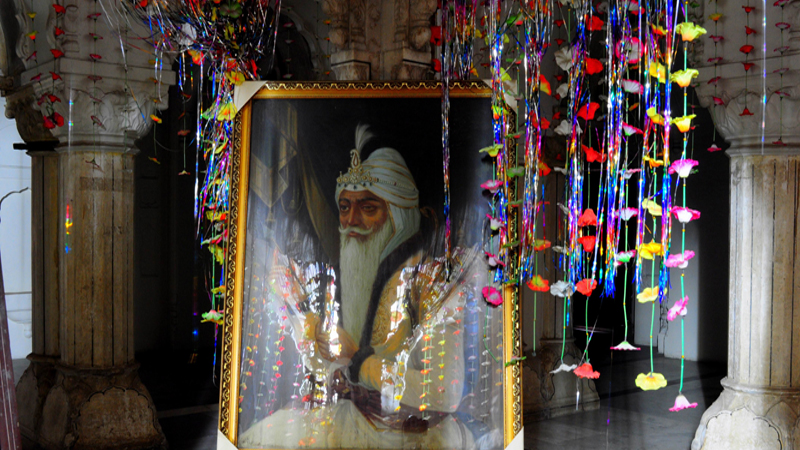 Historic references say that there are indications that some of the materials used in the building were taken from the Mughal buildings, especially from Fort. The large marble door frame of the main entrance the Samadhi ornamented with pietra dura work corroborates that it was taken from the Sheesh Mahal of the Lahore Fort and about 21 other marble door frames at different places in the building apparently also came from some other Mughal strcutures in the Fort. This is also proved by the fact that while building the Huzoori Bagh Pavillion, Maharaja Ranjeet Singh got many pieces from the Jahangir’s tomb in Shahdra. Well but this is what the history say!

This entire building is not just the Samadhi of Maharaja Ranjeet Singh; in the same complex are the Samadhis of Ranjeet Singh’s son Kharak Singh and grandson Prince Nau Nehal Singh who had built the Haveli Nau Nehal Singh now known as Victoria School and Kaharak Singh’s haveli is still intact inside Lahore Fort. The ensemble also has the Shrine of Guru Arjan, the fifth Guru of the Sikhs.

Within the area of this Samadhi long bearded Sikhs will be found reading the Granth, or the Sikh scriptures, over which is reverentially waved a fan of peacock feathers, an emblem of sanctity. The sitar, so fondly heard by Nanak from his faithful disciple Mardana, is played and sacred hymns, describing the good deeds of their gurus, are sung with fervor. The Samadhi is a religious place of Sikh Visitors and after partition of 1947 the place became a must visit site for the “Yatris” in Pakistan.