Mirror Palace — a story of romance 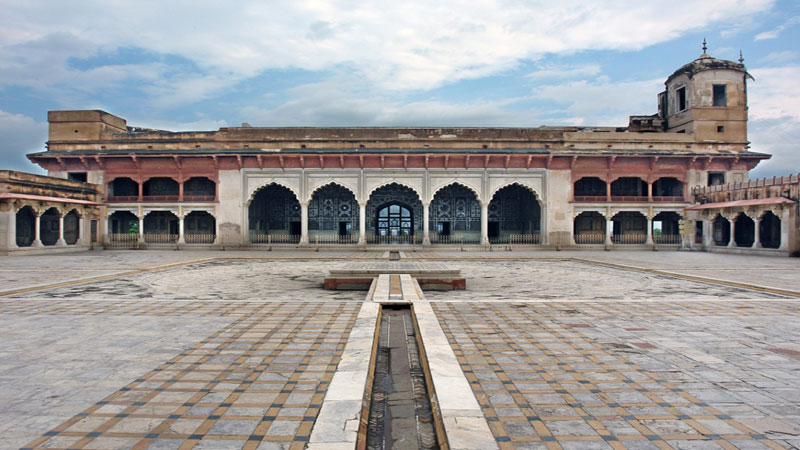 You must have had heard a lot about the majestic Lahore Fort and the structures hidden inside it. No doubt the fort of Lahore is one of the extraordinary constructions of its kind in the world and I bet that while roaming inside the fort, through its ages old bricks, gardens, stairs and walls, you would come across the stories of love, quests, exquisiteness and attractiveness of queens and princesses in flowing gowns, kings and princes in armors and shimmering tiaras, soldiers and slaves, writers and poets, philosophers, intriguers, courtiers and courtesans, the dancing girls dreaming of being queen, murders and killings, punishments and penalties, coronations, and much more. These stories would carry you away into a trance and leave you mesmerised with the aura surrounding you. The sensation begins as you reach the majestic and world’s largest picture wall which depicts the stories of the past in an interesting manner, but more sensational structures are ahead of this wall.
Walking up through the giant elephant stairs, right next to the picture wall, you will reach the famous Sheesh Mahal or the Palace of Mirrors, which is one of its kinds in the world and surprisingly till now no one could make out how it was constructed and what material was used as mirror in it. Some architects and conservationists say that it was some kind of mercury element used as mirror in this structure and that is why it is still intact. It is one of the most majestic palaces of the Mughal period and people from all over the world come to see and study this place.

If you stand in one of the corners of the Sheesh Mahal you will have an outstanding view of the Badshahi Mosque, Samadhi of Maharaja Ranjeet Singh and the Minar-e-Pakistan now in Greater Iqbal Park. It’s a splendid view depicting the stages of history

The love story behind its construction is also as unique as its structure. The Palace of Mirrors or Sheesh Mahal was constructed under the supervision of Asif Khan for Emperor Shah Jahan in 1631-32 A.D. It is said that Shah Jahan got it constructed for his beloved queen Mumtaz Mahal when she lived in Lahore. Unfortunately, before she could step into the palace she passed away and Shah Jahan had to order the construction of Taj Mahal in India. According to references she died in 1631 and the palace was completed in 1632 and this left Shah Jahan heartbroken.
Lahore Fort is on the UNESCO’s world heritage list just because of this palace of mirrors and the picture wall. Visiting this palace you will see thousands of blue, amber and clear mirrors glitter in the sunlight, producing thousands of reflections and if by chance you are there at night, the entire palace would glow with just one candle or light. That’s amazing! The Sheesh Mahal is the novel palace of love and the history would always remind us about the story behind its construction. It is a place whose rooms glitter in a galaxy of light cast by thousands of intricately cut and multi-colored mirrors. I think that it was the Mughals who did things in style making a difference and this palace is a proof of their elegance and stylishness. Many people do criticise the Mughals for building huge and expensive buildings but at the same time we need to learn that because of these buildings and structures Pakistan became popular among the world and now thousands of tourists visit such places and add to the economy of Pakistan.
Now let us go into the structure of this stunning palace with a spacious hall in front and several rooms behind and on the sides. The chief features of Shish Mahal are gilt work (placing of pure gold), pietra dura work (inlay of semi-precious stones into white marble), marble perforated screens and the aiena kari (convex glass mosaic work) with monabat kari (stucco tracery).  The palace had the Harm (female portion) of the fort. The rear chamber houses a marble screen beautiful carved out in tendril, floral and geometrical patterns. The marble stone slabs known as Sang-e-Musa, Sang-e-Abri and Sang-e-Badal add to the beauty of spacious courtyard in the palace. The shallow water basin is constructed in the center of Sheesh Mahal which has four jet fountains, but now these are not functional. I wish the entire palace could be restored to its original function somehow and we could see its original glory and grandeur. The concept of mirror reflects the stars and the ceilings in the rooms present the panorama of a star lit sky at night. It must have been an amazing site in old times and I wish we could see that charisma. The exterior wall of the Sheesh Mahal is the picture wall which presents the beautiful mosaic paintings that depict everyday sport of the Mughal princes for the enjoyment of the people who used to gather below the fort not only to have a view of the emperor sitting in the Jharokha, but also to admire the brilliance of colors on the wall.
If you stand in one of the corners of the Sheesh Mahal you will have an outstanding view of the Badshahi Mosque, Samadhi of Maharaja Ranjeet Singh and the Minar-e-Pakistan now in Greater Iqbal Park. It’s a splendid view depicting the stages of history.  Few replicas of this palace of mirrors were made in the havelis of Lahore like haveli of Mian Sultan inside Delhi Gate and Victoria School but the grandeur could not be matched. 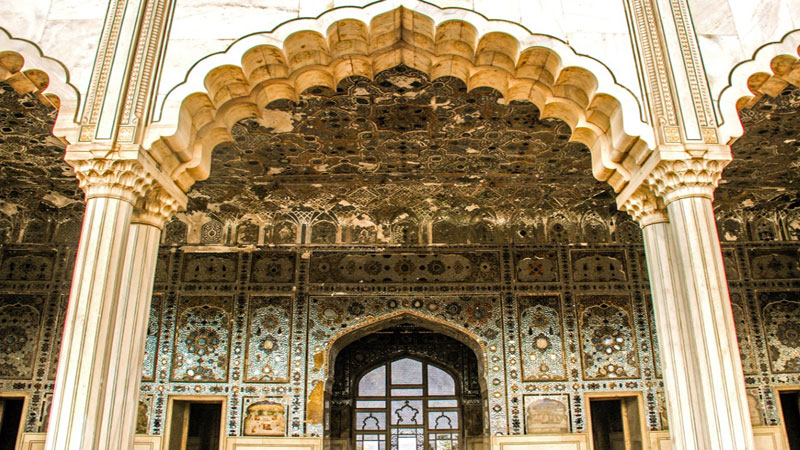 Sheesh Mahal like many other parts of Lahore Fort could not escape the attacks and changes during the Sikh and British rules. During the Sikh period Maharajah Ranjeet Singh used the roof of Sheesh Mahal as a ‘harem’ where he would sit in style and display the ‘Koh-e-Noor’ jewel. It is said that he also died in the same room which is still intact and one can go there through a narrow staircase. These additions on the top of Sheesh Mahal added load that made the structure weak and the roof began to deteriorate and collapsed at one time. Historic accounts say that in 1904-05, the plaster from the ceiling of main veranda fell apart, exposing the decay of internal wooden beams and the corroding roof. At this stage, the building was listed by the department of archaeology of British India in 1927 and the repair work was carried out. Similar problems arose in 1960s and were resolved through minor repairs. In 1975, Sheesh Mahal was listed as a protected monument under the Antiquities Act by Pakistan’s Department of Archaeology and in 1981 UNESCO declared it as a World Heritage Site. In 2006 the structure was restored by foreign funding and experts of Department of Archaeology, but now again it is becoming feeble and the present authority having the administrative control of Lahore Fort, Walled City of Lahore Authority is devising a comprehensive plan for its conservation along with the conservation of summer palace, Sheesh Mahal’s basement and picture wall.
At present, the Sheesh Mahal has been illuminated with small lights and electronic candles by the Walled City of Lahore Authority and any one going to history by night tour of Lahore fort can see the glittering Sheesh Mahal. I think it’s a must visit place for anyone who has missed
it so far.
The writer is a media professional and can be reached at heritagechroniclestq@gmail.com