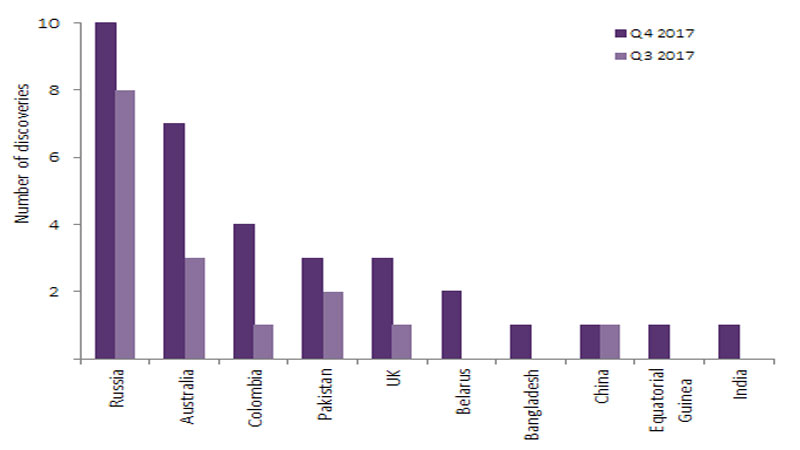 Pakistan made two key oil and gas discoveries in the third quarter and another three discoveries in the fourth quarter of 2017. These discoveries may have prompted the US-based Exxon-Mobil to join off-shore drilling efforts in Pakistan. American energy giant’s entry in Pakistan brings advanced deep sea drilling technology, its long experience in offshore exploration and production and its deep pockets to the country. US Energy Information Administration (EIA) estimates that Pakistan has technically recoverable deposits of 105 trillion cubic feet (TCF) of gas and 9.1 billion barrels of oil. Exxon-Mobil is expected to accelerate exploration and lead to more discoveries and increased domestic oil and gas production.

Russia led with 10 discoveries, followed by Australia with seven discoveries and Colombia with four discoveries. Pakistan and the UK each had three discoveries in the fourth quarter of 2017, according to Global Oil and Gas Discoveries Review.

Each company will have 25% stake in the joint venture under an agreement signed at the Prime Minister’s Secretariat in May among ExxonMobil, Government Holdings Private Limited (GHPL), PPL, ENI and OGDC.

Exxon-Mobile’s entry in Pakistan brings deep offshore drilling technology, its long experience and financial resources to the country. It is expected to accelerate exploration and more discoveries.

A Pakistan Basin Study conducted in 2009 found that the country has six onshore and two offshore basins; offshore basins being the Indus basin and the Makran basin in the Arabian Sea.

The Indus offshore basin is a rift basin that geologists say developed after the separation of the Indian Plate from Africa in the late Jurassic period. It is believed to be the second largest submarine fan system in the world after the Bay of Bengal with high probability of hydrocarbon discoveries.

The Makran Offshore basin is separated from the Indus Offshore basin by Murray ridge, according to Syed Mustafa Amjad’s report in Dawn. It is an oceanic and continental crust subduction zone with deepwater trenches and volcanic activity. The basin consists of oceanic crust and periodic emergence of temporary mud islands along the coast suggesting strong evidence of large hydrocarbon deposits.

The United States Energy Information Administration (EIA) estimates that Pakistan has 586 TCF (trillion cubic feet) of gas in Pakistan of which 105 TCF is technically recoverable.

Pakistan also has 185 billion tons of coal deposits in Thar desert which are just beginning to be extracted by Sindh Engro Coal Mining Corporation.

Oil and Gas exploration and production companies are currently planning to drill 90 wells in different parts of the country. Under the plan, as many as 50 exploratory and 40 development wells would be drilled in a bid to make the country self-sufficient in the energy sector, according to media reports.

During the last five years, the sources said the exploration and production companies drilled 445 new wells, out of which 221 were exploratory, adding that the increased exploration activities resulted in 116 new oil and gas discoveries.

Energy imports make up a big chunk of Pakistan’s total imports. Rising oil prices worsen the current account deficit and put pressure on Pakistan’s reserves, forcing the country to seek periodic IMF bailouts. Pakistan’s current account deficit has jumped by 50% to a record high of $14.03 billion in the first 10 months of the current fiscal year 2018, according to the State Bank of Pakistan. The country imported $12 billion worth of energy in 2017. The bill is likely to grow with increasing demand and rising prices in 2018.

Reducing energy imports by increasing domestic production will likely ease Pakistan’s current account deficits and reduce its chances of going back to the IMF again and again.