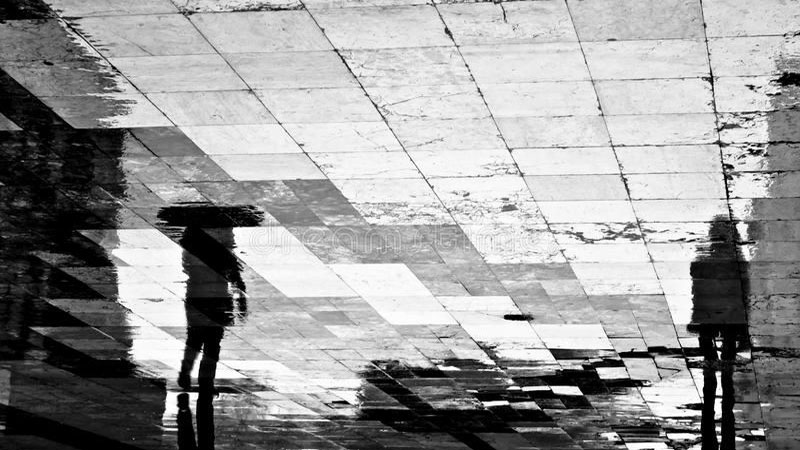 I was there, looking at you. You looked beautiful, like a paper floating in the scars of the road during the rain. You looked more beautiful when you looked at me. Why did we smile to each other? Perhaps, a fool gets excited in the presence of another fool. We were both foolish not to use our umbrellas. Everyone was hiding behind the ironed curtains of the shops, stuffed like those poor school kids in the morning assembly. We stood there, opposite to each other, on the footpaths of different roads. Yet we both knew we were travelers of the same road. I thought of coming to you to ask you your name, but then I said to myself there was no point in knowing what wasn’t yours.

But I read it the moment you turned your face and looked at me with teary eyes. We were no more two strangers enjoying their office breaks and standing opposite to each other, reflecting on time in the furious rain. We became one, like the two hands of a clock at 12 am

The moment was free from the burden of our identities. A little bit of sun surfaced with the dark clouds over the government offices of the Blue Area. You were there. You were looking at the road, lost in your thoughts, drenched in the wet rain. I could see you, completely, despite the green belt hiding your feet. You were me. The stains from the splashes of the cars didn’t bother you. You were looking at everything on the other side of the road, still you were not looking at anything. You turned your face to me and then began looking at the road like a child after he’s distracted for a little time with his homework. I had to look at the spot where your eyes were. It was a rat struggling to enter through a hole in a wall. His struggle made you unaware of the breeze pressing against you trying to seek refuge. The rat was full of life, unlike the people of our city. He was keen, like a helpless but excited prisoner, attempting to wriggle his way through the hole. He hit his head and stayed in the moment with all his energy. It took him two whole minutes until he gave up. But this is what I had thought. He came again with greater force, only to lose again. After a few more attempts, he finally gave up and walked away.

Ah! The pain reflected on your face was greater than what I felt in my chest. I know what you saw in the rat: the whole world, your entire life, your youth, your family, your sins, your regrets. You felt the walls, the sight of the blood dripping from the ends of your hair after hitting the walls, and your surrender. Why do humans surrender? You must have thought that before. What a terrible feeling living your desires all your childhood and youth, only to give them up at the hands of a traitor. I felt it on your face. I read your story even though you kept that book in the hidden shelf. But I read it the moment you turned your face and looked at me with teary eyes. We were no more two strangers enjoying their office breaks and standing opposite to each other, reflecting on time in the furious rain. We became one, like the two hands of a clock at 12 am.

Just standing in silence next to you would have been better than all the empty conversations I’ve ever had with my colleagues. A stranger who knew me was all I wanted, among all the familiar faces

I had to walk towards you. I had to, because you never blinked once while looking into my eyes the second you turned your face away from the rat. Perhaps, you were searching for a dead rat in me. The rain objected for a little while when I started walking. The sky coughed, then it raised its voice in unison. But I had to come to you; there was that power in your eyes; that force; that pull. Why was I coming? What did I want? I don’t know. Just standing in silence next to you would have been better than all the empty conversations I’ve ever had with my colleagues. A stranger who knew me was all I wanted, among all the familiar faces. I liked slow walking. It was important to generate a slow musical rhythm. As I kept getting closer, your picture became clearer. You didn’t open your arms, and I liked it. I wanted you to be idle until I came towards you. No movement. Not even a blink. The wind had other plans, but I didn’t pay focus, even when its slapping became a little intense when I reached the green belt – the centre between our roads. Perhaps, I should have ran towards you instead of walking. That way we would have died together under the tree which left its roots because of the wind and crushed your body. I should have reached before that tree reached you. I would have been unburdened of my existence. It would have been much better than losing my legs to the frightened car whose driver panicked at the sight of your dead body under the tree. But I guess this is what we humans have: our “shoulds” and “shouldn’ts”.

I am burying this letter in your grave. I hope you find time to read it in the peace you are in.

The writer is currently enrolled in M.Phil International Relations at Quaid-e-Azam University. He writes on subjects related to cinema, climate change, and political philosophy. He can be followed @AdilUsafkhan