Is charity a capitalist value? 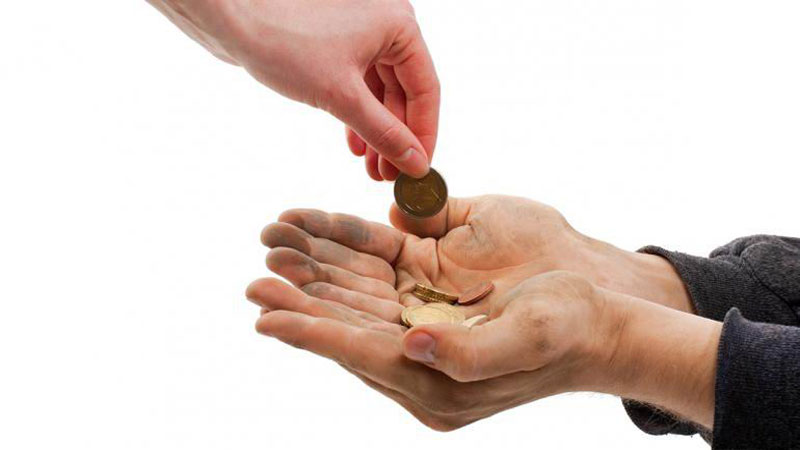 I had a horrible dream last night. When I woke up in the morning, the only detail left of the nightmare was a deep sense of loss. The first thing I did after leaving the house was to search for a deserving beggar on the street, as I drove myself to work. All I had in mind was that giving away some cash in charity might just help. My car stopped at the first signal, no one showed up. I squinted my eyes in all directions to scan for a beggar. The green light glowed and the traffic moved on. It was only at the fourth signal that I found one trudging along the dense traffic. It’s hard to tell how much I waited for any of them to come near my car window that day, in any other situation I would have otherwise tried my best to escape and scorn. I was convinced to deliver cash to the first beggar I saw, such was the urgency. A poor woman approached and in her lap I found out a tiny infant holding an empty bottle of milk to its mouth. My hand slid inside my wallet to pick a crisp note of fifty. The second instant I pulled out another fifty the signal turned green and I rushed with handing over the money to her. She seized them hurriedly. Meanwhile, the cars drew off, the strange feeling that trouble me since morning seemed to wear off. Such a miraculous effect charity casts on the givers!

Like everything else in the capitalist world, charity too is like any other commodity of the market. People trade it in their selfish interests

Research tells that voluntary giving of money, time or any sort of unpaid help activates Nucleas Accumbens, a brain region linked to every type of pleasurable experience. As a result one feels rewarded. We extend charity in a number of ways- some with money, others with time. Some provide assistance in the form of clothes and food, and some donate blood. Some people choose to help individuals, while others only prefer giving to organisations. However, I happened to realize lately that innumerable ways there may be to help the deprived, the motives of a giver alwaysflow from hispersonal self. His selfish reasons urge him to lose his pocket. This drive to charityusually feeds on our alarming fears, uncertain times, sense of guilt, wounded self-esteem, pretentious pride, or simply an urge to feel good about ourselves. Sometimes we give charity, for something bad that may not happen to us, or the bad that we have done to others, consciously or unconsciously, may not swing back by Fate. Charitable giving clean-sweeps all the negativity we may stock and provides instant self-gratification and a spiritual uplift to mood. In the study, published in the Journal of Neuroscience (Yale University), researchers found that people are more likely to give when they think it will make them feel better. Whatever motivation pulls our pockets open, it does not affect the good that our donated money does. It brings financial and emotional security to the receiver anyway. In the World Giving Index 2017, Pakistan climbed up 14 places making it to the top 10 generous countries despite a declining trend across countries in global giving. Pakistan contributes more than one per cent of its GDP to charity, the Stanford Social Innovation Review reported. The contributions push it into the ranks of far wealthier countries like the United Kingdom (1.3 per cent GDP to charity) and Canada (1.2 per cent of GDP), and stand around twice what India gives to those in need as a percentage of its GDP.A study conducted by Pakistan Centre for Philanthropy shows that Pakistanis give around Rs. 240 billion (more than $2 billion) annually to charity, and almost 98 per cent of Pakistanis give in one form or another, if not with money, then with in-kind donations or by volunteering for needy causes.Fueling this culture of generosity is the Islamic emphasis on giving – in the form of Zakat, Sadaqa, and Fitrana – as well as other moral and social factors and a deeply rooted sense of compassion toward community members.

Both the less-privileged class and the charity centers have long known that putting a specific face on an abstract problem opens hearts and wallets. Their strategic presentation of the problem attracts people to give more. Ramazan boosts religious fervor among Muslims and these people know that it is easier to connect to them emotionally during this month. That is why we find an increased number of organisations knocking at our doors asking for donations, in one form or another. Who knows if they are registered bodies or simply a hoax? Similarly it is observed that the manipulative skills of beggars are growing better with the ever changing demands of time. Now the clean looking children with their uniforms on and the school bags hanging behind their backs knock at our car windows asking for school fee and the money for books. These innocent faces with an apparent object to seek education pull down our window screens much faster than anything else lately. The so-called charity centers and the beggars have grown more confident and shameless in their begging. They refuse to accept the amount you volunteer on your own or take it only to demand for more if it does not fit to their greedy expectations. Like everything else in the capitalist world, charity too is like any other commodity of the market. People trade it in their selfish interests.