Interim regulation is a stopgap measure, can be revoked sooner than expected: Sartaj Aziz 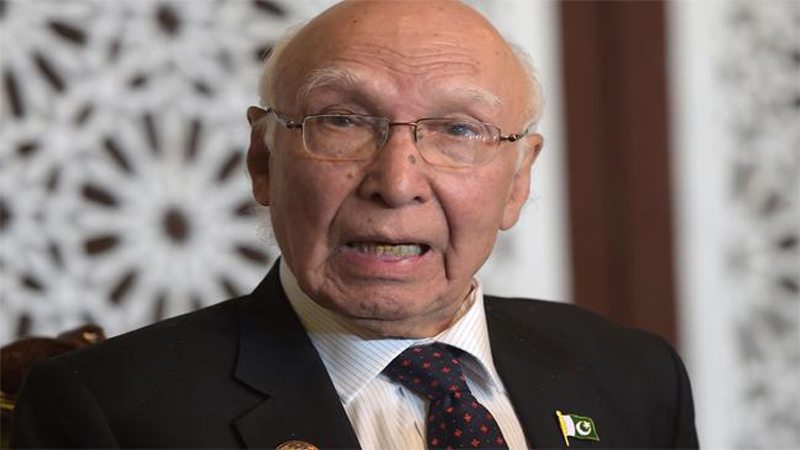 Islamabad: The FATA Interim Governance Regulation 2018 was a stopgap measure, which could be replaced very soon, Sartaj Aziz, the chairperson of the FATA Reforms Committee, said on Friday.

He was responding to arguments put forth by Kamran Arif, the vice chairperson of the HRCP from Khyber Pakhtunkhwa, at a consultative meeting.

Former senators Farhatullah Babar and Afrasiyab Khattak and other participants of the meeting strongly criticised the Regulation and termed it ‘worse than FCR in many respects’. While analysing the regulation clause by clause, Senator Babar said that it retained worst aspects of not only the FCR but also the Rewaj Act, which was proposed but later retracted by the government in 2016. He informed the meeting that the drafts of the Regulation circulating in the public domain were different from the one signed by the President. He lamented that instead of transparency, more opacity and uncertainty about the system was promoted by not making the contents of the signed Regulation public.

Khattak identified prevalence of the black economy in the border region, Pakistan’s flawed policy towards Afghanistan, continuation of sleeper cells of Taliban and the land mafia as main reasons behind resistance among the officialdom to any substantive change in tribal areas. He emphasised the need for land reforms in the region, to give ownership rights to the people of erstwhile FATA, and to put an end to unchecked use of land in the region by security agencies. He cited the example of pine nut (chilghoza) growers of Waziristan who were not allowed to sell their produce directly to buyers in the marketplace.

Khattak also backed a key demand of the Pashtun Tahaffuz Movement for a Truth and Justice Commission to dig into the reasons behind militancy and strategic games played in FATA.

Dr. Naureen Naseer, a PhD scholar from Kurram Agency, strongly expressed her concern over exclusion of women from consultations led by the FATA Reforms Committee and other fora to decide the fate of the region. She said women were primary stakeholders and main affectees of war and violence. “Many women had either lost their male family members to war, terrorism or enforced disappearances. These women need not only shelter but also means for subsistence and dignity. The Regulation, she said, gave precedence to the rewaj (customs) of tribes which was bound to put women and minorities in a position of disadvantage. She said that the debate about the extension of higher courts should also include establishment of family courts, juvenile courts, special crisis centres, and other relief structures for women.

While speaking at the meeting, senior journalist Saleem Safi said that the merger should not be rejected or undermined because of the Regulation. He said that the situation of the people of tribal areas used to much worse than it was now.

Referring to the recent escalation of tensions and violence in Wana and subsequent bar on Pashtun Tahhafuz Movement leader Mohsin Dawar to enter his native North Waziristan, Safi said that the entire Dawar tribe would have been expelled, their homes vacated and marketplaces demolished had the FCR still been enforced.

Safi also pointed out that the orders of banning Dawar from entering North Waziristan were signed by the political agent, which should not have been the case after the adoption of 25th constitutional amendment and the promulgation of the Interim Governance Regulation 2018.

Dr. Saba Gul Khattak said that the extension of courts to the region was not something new. Throughout the history of FCR since 1901, and even before that, this kind of extension had been made several times, for example in 1955, but was retracted later,” she informed. She stressed the need to ensure that the recent move was permanent.

Sartaj Aziz, while responding to participants’ concerns, said that it was extremely unlikely that the merger could be annulled because this time it had happened through an act of Parliament with two thirds majority. Responding to Tahira Abdullah’s question, he urged the participants to look at the Regulation as part of the process to empower the people in the tribal region. “This is an unprecedented development for the people of tribal region and needs to be celebrated. The Regulation is a temporary thing and can be revoked and replaced sooner than we might expect,” he said.

While concluding the meeting, HRCP’s central spokesperson I. A. Rehman said that proper oversight of the implementation of reforms was necessary. “The powers that have been against these developments, were very strong and that’s why this could not happen earlier. These powers still remain strong, which is why it is important to keep a vigilant eye on the implementation,” he added.