Upping the ante, Nawaz says Rasheed, Mushahidullah’s resignations a sign of his patience 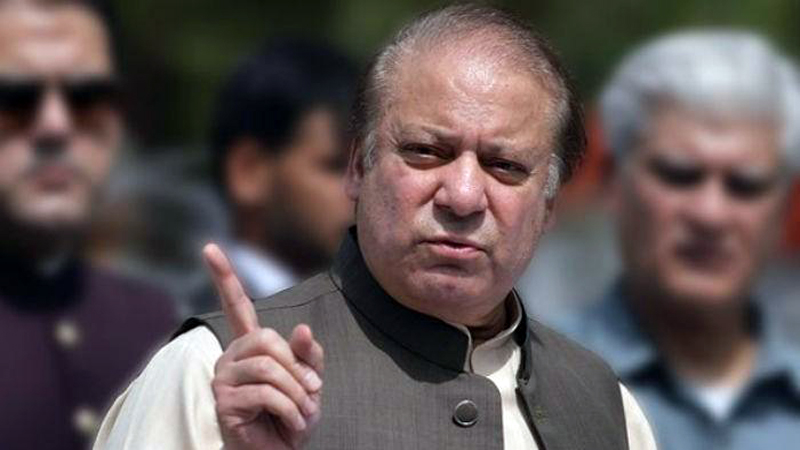 ISLAMABAD: Continuing his ongoing series of statements on the civil-military tensions during his term in office, former prime minister Nawaz Sharif said on Thursday that resignations of former ministers, Pervaiz Rasheed and Senator Mushahidullah Khan, were a sign of his patience.

Rasheed and Khan, who held information and climate change portfolios in Sharif’s cabinet, were made to resign in separate incidents involving civil-military power imbalance in the country.

Rasheed’s resignation had followed a report carried in daily Dawn that cited an unnamed source on a civil-military huddle where civilian leadership, from the PML-N, took exception to the lack of cooperation from security agencies in taking decisive action against militants based in the Punjab.

Khan resigned after he stated in his interview with BBC Urdu that the former head of a premier spy agency of the country tried to stage a coup during the 2014 sit-ins by opposition parties.

Speaking to media at the accountability court on Wednesday, Nawaz corroborated Khan’s stance when he said that the head of an intelligence agency approached him during the 2014 sit-ins and asked him to either resign or go on an extended leave.

Continuing on Thursday, Nawaz said that being the constitutional head of the government, he could have fired the officer, but he didn’t for the sake of the country.

“I have shown immense patience, forgiveness, and forbearance, but these problems have been haunting us for the last 70 years,” he said, adding that it was the court that allowed Musharraf to leave the country, not his government.

Commenting on the coverage of his press talk at the accountability court on Wednesday, the former PM said he was ‘pleasantly surprised’ to see the media air his entire statement. “It is the right of media to telecast everything. Media shouldn’t let anyone suppress it.”

“Everyone must stand up. Once everyone takes a stand only then will we be able to fix the system,” he remarked.

On Thursday, Nawaz had said that accountability references against him were meant to punish him for initiating Musharraf’s treason trial.

The Avenfield reference, pertaining to the Sharif family’s London properties, is among three references filed against the family by the National Accountability Bureau (NAB) following a Supreme Court mandated inquiry in the Panama Papers’ case.

Recording her statement in the Avenfield reference in the accountability court on Thursday, PML-N leader Maryam Nawaz said that the JIT report was an investigative document and it could not be presented in court as evidence. “The JIT team and their report are irrelevant in the case of Avenfield properties,” she said, adding, that the report was an investigative document, which could not be accepted as evidence.

Maryam Nawaz said the Supreme Court ordered references to be filed in light of the evidence presented by the JIT, adding that the court did not ask the JIT report to be made part of any reference as evidence.

Maryam also raised concerns over the selection of JIT members.

She said that there was no rationale for the inclusion of personnel from the Inter-Services Intelligence (ISI) and the Military Intelligence (MI) into the JIT.

She said Irfan Mangi’s appointment as the director general of the National Accountability Bureau (NAB) had been challenged in the Supreme Court but he was still made a part of the investigation team.

About the inclusion of Amer Aziz from the State Bank of Pakistan in JIT, Maryam said he was a close aide of Musharraf. She said Musharraf got Aziz appointed in NAB as the banking director in 2000. She also expressed reservations over the inclusion of Brigadier Noman Saeed, saying he was not working in the ISI at the time of his appointment in JIT. She also held that according to her information Brigadier Saeed was a part of the Dawn Leaks inquiry committee as well.

Calling Maryam to court for cases from a time when she wasn’t in politics a new low: Nawaz

Meanwhile, speaking to the media at the court, Nawaz lamented that the cases in which his daughter was being summoned to the court everyday belonged to a time when she was not involved in politics. He said it was regrettable that Maryam was being made to suffer in references filed against the family.

“My daughter has nothing to do with these references. She was not in politics during the 1990s. They have hit a new low by calling Maryam to the court. Whoever has set this trend will have to pay a price.”