* 'We are truly happy to come over here and are hopeful for the future as well,' the Thai delegation said 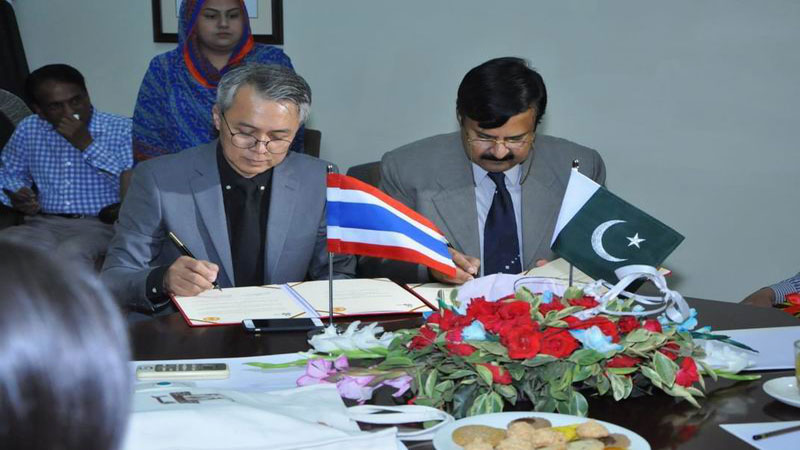 LAHORE: Alhamra Arts Council (LAC) and Thammasat University, which is the second oldest university in Thailand have signed a Memorandum of Understanding (MoU) under the leadership of executive director Captain (r) Atta Muhammad Khan with Sociology & Anthropology Department of Thammasat University, to build cultural exchange links programmes that will promote a positive and a softer image of Pakistan on an international level.

In this regard, a nine-member delegation from the Sociology & Anthropology faculty visited Alhamra which included Director of Museum Anthropology Department Sudan Wisudthiluck and Assistant Professor Dr Yukti Mukdawijitra who signed the MoU.

“We are truly happy to come over here and are hopeful for the future as well,” he said.

Speaking on the occasion, executive director Atta Khan said that Lahore Arts Council in the last three years has been engaging in diplomatic community through different cultural events to showcase the cultural diversity of Pakistan on a broader level.

“In continuation of our commitment towards the promotion of peace through culture, Alhamra has gradually and successfully gained its goals and this MoU is a successful result of our efforts,” he said adding that it is the prime objective of Alhamra to showcase “our culture and traditions to the world and make them believe that Pakistanis are peaceloving people. Alhamra would make its best to enhance the bilateral relationship with Thailand”, he added.

According to the MoU, the parties will exchange exhibitions of contemporary as well as traditional visual arts, including handicrafts and other cultural heritage items, possibly accompanied by artists and artisans. The parties will also encourage establishing bilateral cooperation relations between the counterparts of cultural institutions between the two countries.

They also intend to promote exchange within the field of performing arts with an emphasis on the exchange of troupes in the field of music, emphasising on traditional folk music. The performers may include children, youth and women.