In an act of defiance, American Jews rally for Palestinian cause 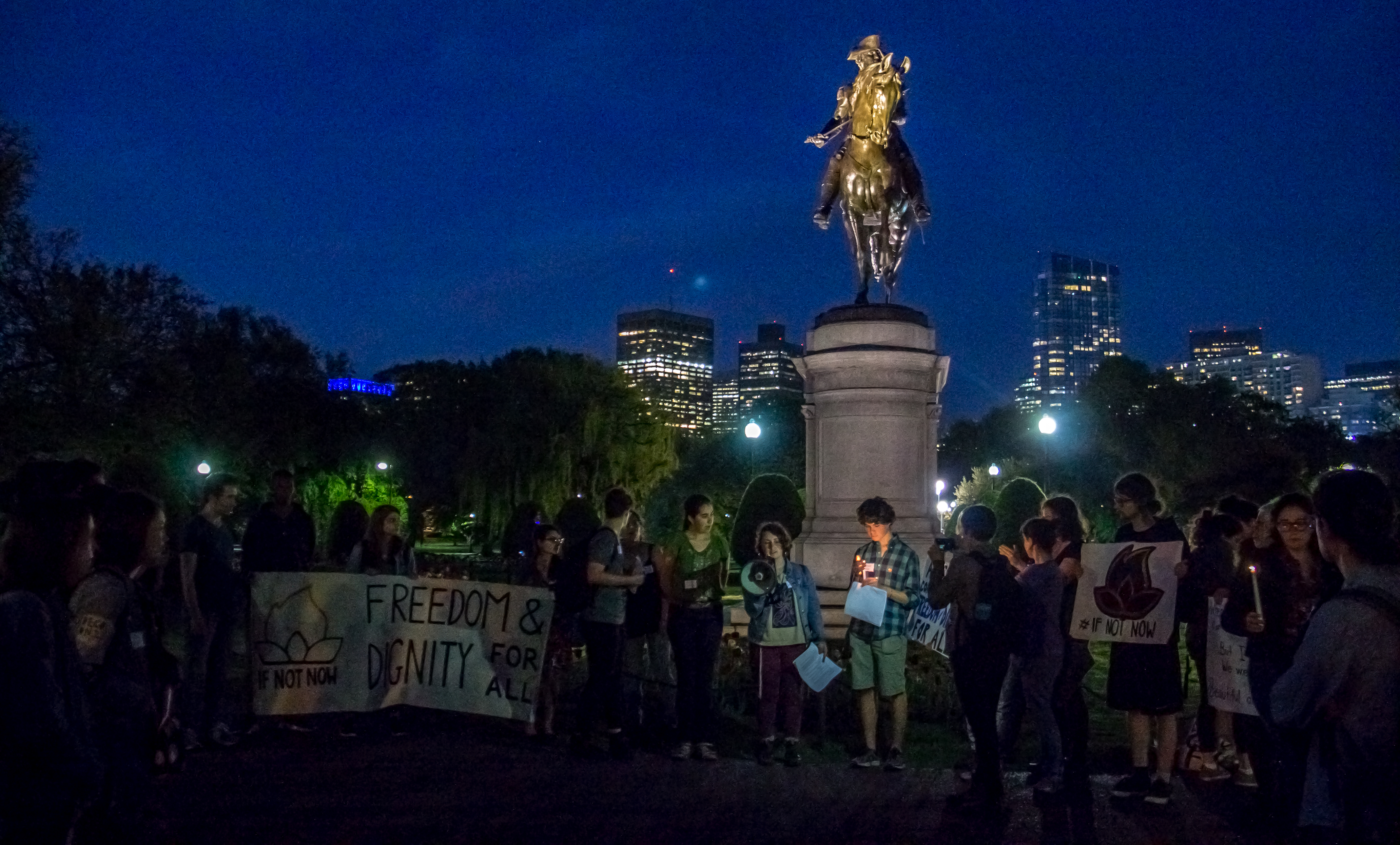 Boston, US – In the summer of 2012, Ayelet Reiter was atop the Austrian Hospice of Jerusalem looking into the Old City. It was Ramadan and the next day was Tisha B’Av, a day that Jews like her would mourn the destruction of the Holy Temple by observing a 25-hour fast.

After leaving the Hospice, she heard cannon fire marking the start of Iftar and found herself amongst a crowd of Muslims waiting to pray at the Al-Aqsa Mosque. As she vividly recalls, “straight ahead there were ten Israeli soldiers, grilling the people in line, deciding whether to let them pray or not.”

Years later, she reflects upon that night with a tinge of sadness. Speaking at a gathering of American-Jews, she says that, “living in the diaspora, I can visit my holy sites.”

“If they’re from East Jerusalem, if a solider lets them in, they can pray [at Al-Aqsa] on their Holy day. If they’re from the West Bank, they must go through several check points. [And] if they’re from Gaza, they probably can never go, even during Ramadan.”

On May 17th, the night before Pakistan observed Palestinian Solidarity Day, Reiter joined over thirty young American-Jews from IfNotNow as they sang, prayed, and mourned for Palestine.

Since the Great Return March began on March 30, thousands of Palestinians have engaged in non-violent protests against the Israeli siege and against the occupation of Gaza in hopes of highlighting their deteriorating living conditions and to re-center the issue of refugee rights.

Their protests have been met with violence from Israeli forces as 111 protesters have been killed and 12,733 have been injured.

“We are gathering today as American-Jews whose hearts are broken as we continue to see the Israeli military attacking Palestinian protesters, medics, journalists, children, and activists. And we are outraged at this violence and by the profound silence of our Jewish institutions in this moment.” 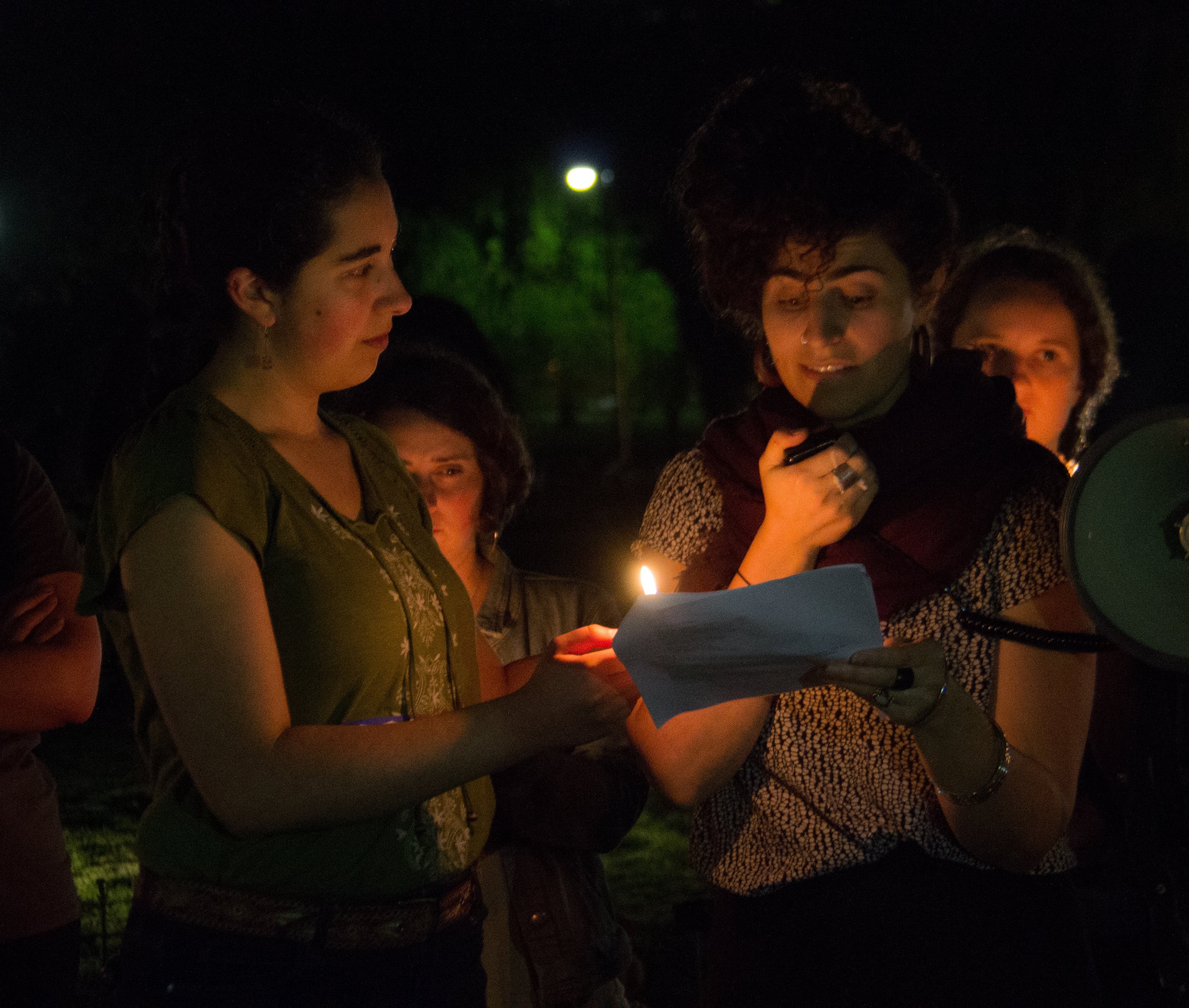 Teary-eyed speaker from IfNotNow opening the vigil for Palestine

IfNotNow is an American grassroots organisation led by young Jews with the goal of transforming their community’s support for the occupation into a call for freedom and justice for all.

According to Evelyn Jagoda, one of the Boston chapter’s leaders, “We know our [American-Jewish] community is not the only reason [for the occupation] but it is one of the reasons [the peace process] keeps getting stuck.”

She believes that by taking a stand, IfNotNow can convert all the “energy, support, institutional power, and money” of the Jewish community into a “call for freedom and dignity” that will “change the political landscape.”

They’re having an impact. Younger American-Jews are increasingly joining the ranks of IfNotNow, Jewish Voice for Peace, and J-Street in protest against the Israeli Occupation while rebuffing the more conservative American – Israeli Political Action Committee (or AIPAC) and the Anti-Defamation League (ADL). 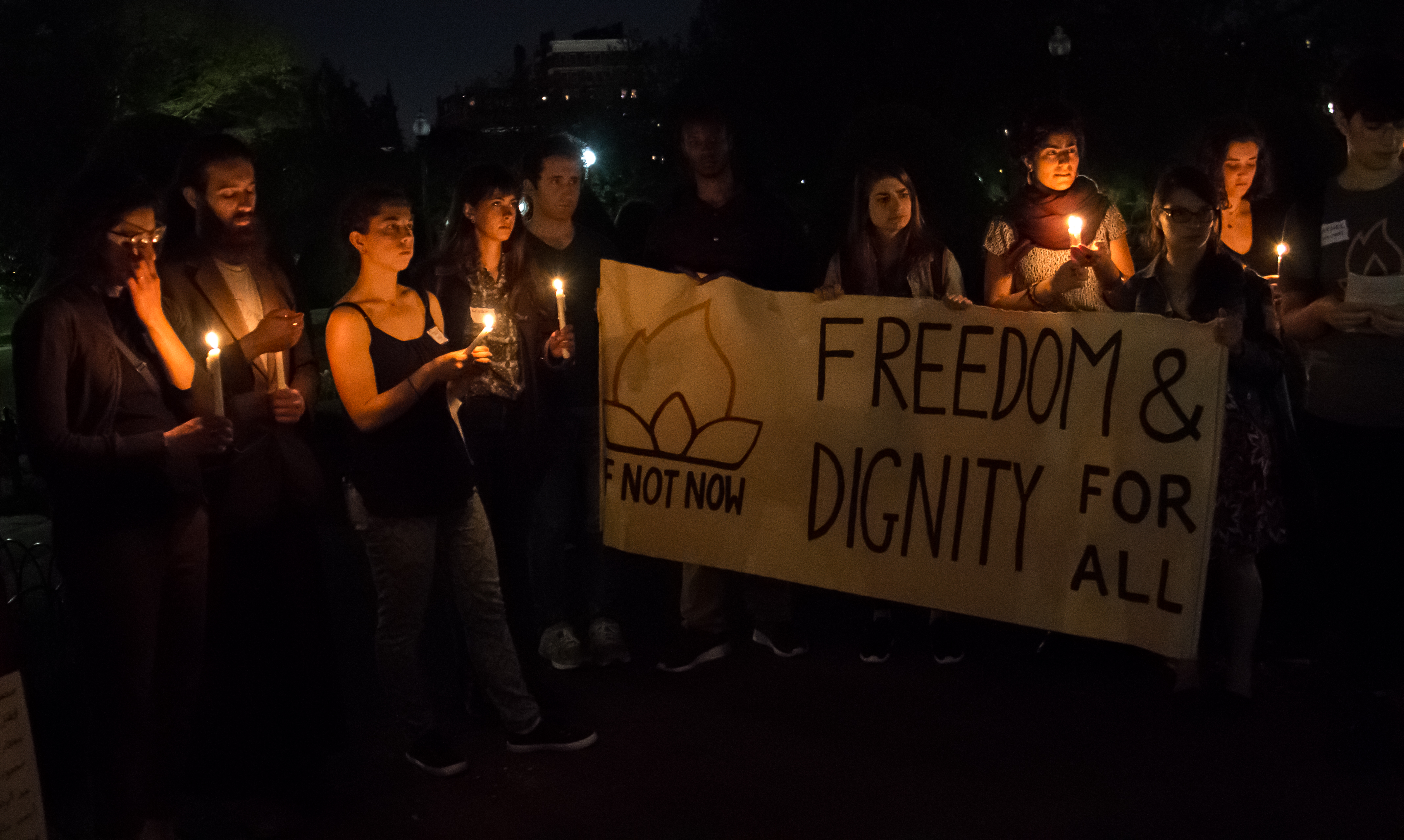 IfNotNow stands for ‘Freedom and Dignity for All’

At the vigil, the speakers emphasized the importance of “uplifting Palestinian voices” and read an excerpt from Fadi Abu Shammalah’s op-ed in the New York Times titled, “Why I March in Gaza.”

“If Ali [his son] asks me why I’m returning to the Great Return March despite the danger, I will tell him this: I love my life. But more than that, I love you, Karam and Adam [his other children]. If risking my life means you and your brothers will have a chance to thrive, to have a future with dignity, to live in peace with all your neighbors, in your free country, then this is a risk I must take.”

They then brought out signs brandishing in Hebrew and Arabic the names of the 60 Palestinians who were killed by Israeli forces on May 15th alone. It took over seven minutes to read them all. 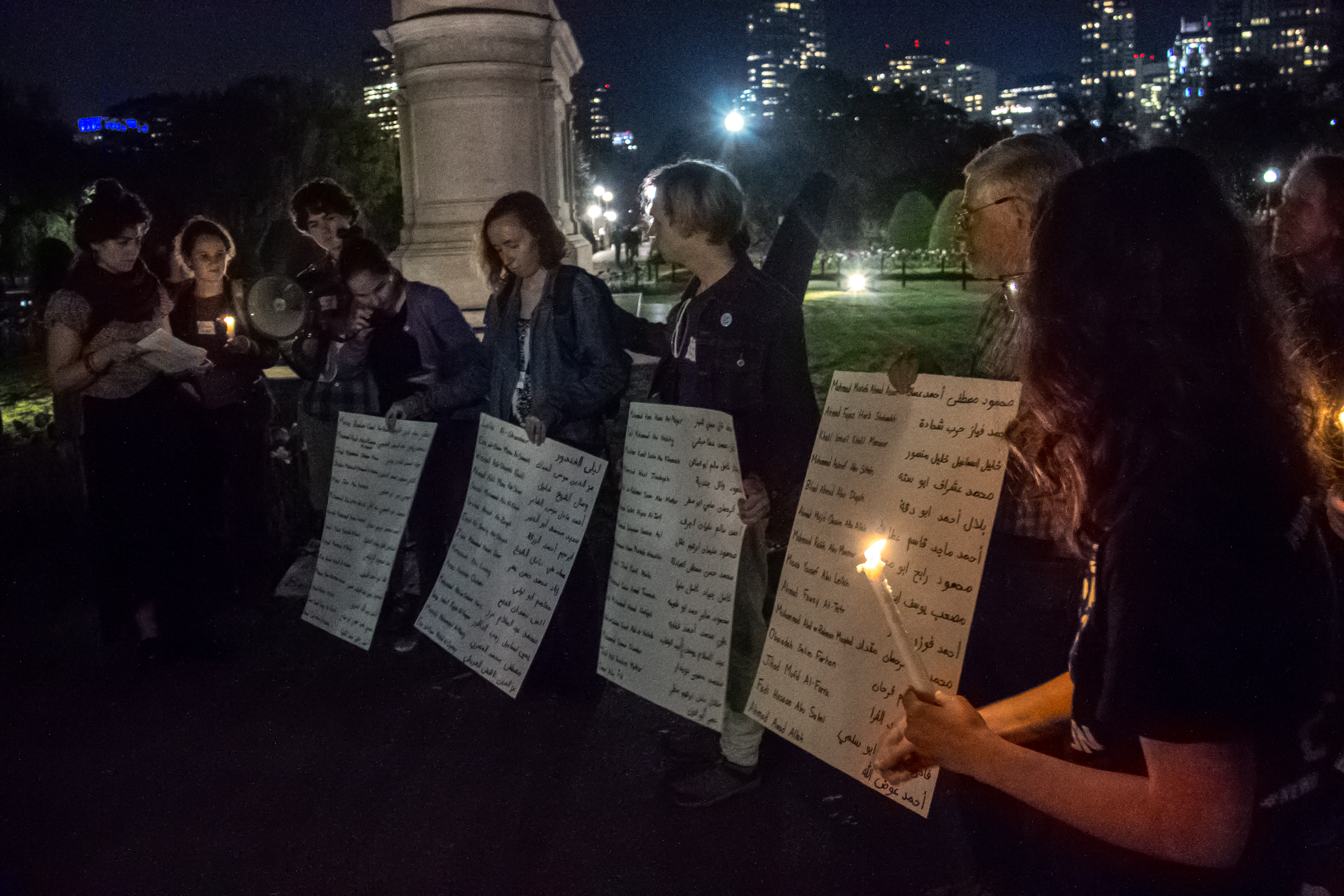 Participants read the names of the Palestinians killed on May 15th

As the protesters began singing, “we will build this world with love,” Jagoda said that, “It pains me in a way that I can’t describe because our people have suffered so much trauma and violence in recent history – and we have allowed that fear of violence to turn us into oppressors.”

She also added, “We came out here because we’re Jews. There’s a pillar in our faith called Tikkun Olam that instructs us to ‘repair the Earth’ – which means fighting for freedom and dignity for all.” 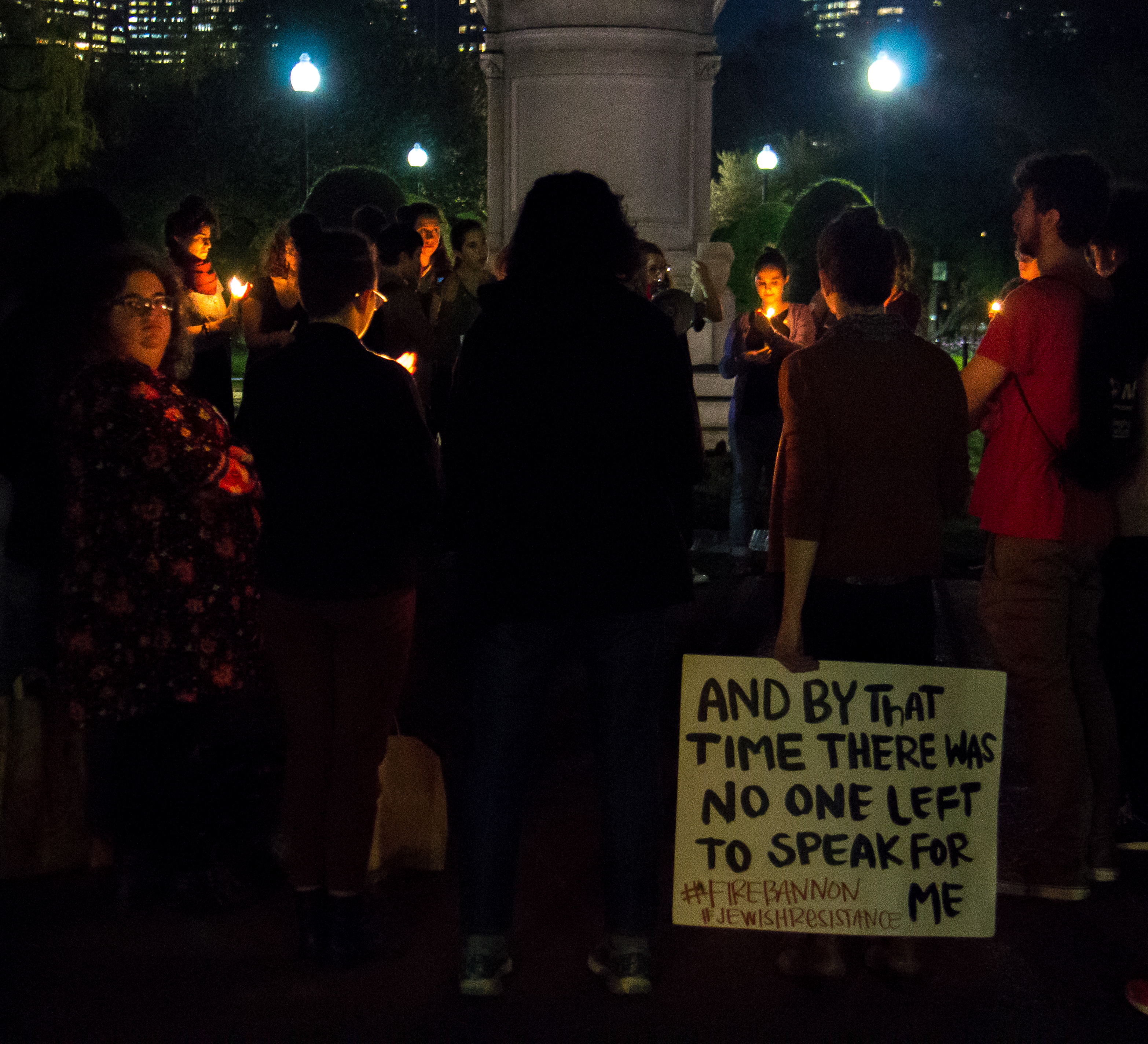 “And by that time, there was no one left to speak for me.”

The writer is studying at Boston University and can be reached at sirashid@bu.edu, or on Twitter @Ibrahim_Rashid1