We have tried to break new ground with ‘7 Din Mohabbat In’: Meenu Gaur and Farjad Nabi 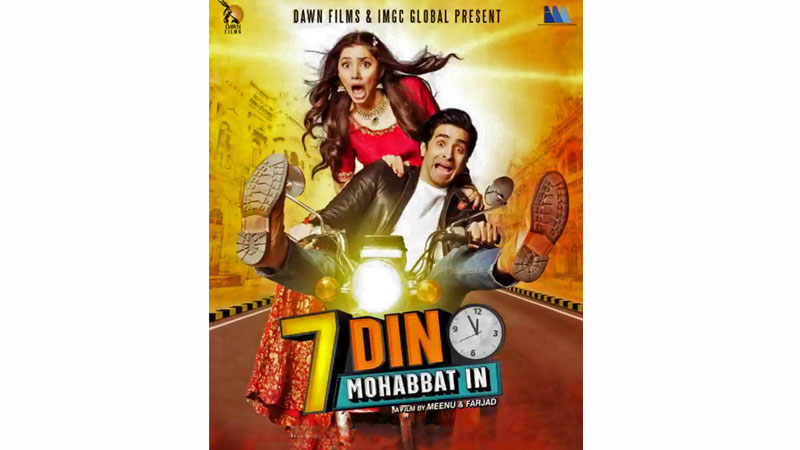 A few weeks before the release of their latest feature film, ‘7 Din Mohabbat In’, the acclaimed director duo of Meenu Gaur and Farjad Nabi sit down with Ally Adnan to talk about the Pakistani film industry, their love for cinema, classic films of yesteryear, the films that they have made together, and 7 Din Mohabbat In.

A lot is written and said about Pakistan’s resurgent film industry. What do you think of new wave Pakistani films?

Meenu: It is exciting to see that so many different kinds of films, from art to commercial, are being made in Pakistan. It is amazing that a nascent industry is able to produce and find audiences for unconventional and off-beat films.

Farjad: The Pakistani film industry, like any other industry, can only survive and thrive if it is given the right support and incentives. These include tax breaks, loans, subsidies, and a raft of other measures that are needed to sustain the resurgence.

What are your favorite Pakistani films?

Farjad: Maula Jutt is a personal favourite. In fact, it is more than just a favorite movie. Meenu and I are working on a documentary and archival project about the film since 2011. The more we learn about Maula Jatt, the more we are in awe of the film.

Meenu: Farjad and I are big fans of Pakistani cinema and watch a lot of Pakistani films. Our debut film, ‘Zinda Bhaag’, was a tribute to old Lollywood. We have also made two video art pieces, ‘The Ghost Will Leave if You Ask Nicely’ and ‘Manifesto for the Dead’, which are reminders of Pakistan and Lahore’s lost heritage of cinema.

Old Lollywood films are truly fascinating. A lot of them were experimental and avant-garde. Contemporary mainstream filmmakers I feel are no longer experimenting with content and form in the same manner. I do not think that anyone would have the courage to make a film like the ones Rangeela used to make. ‘Aurat Raj’ (1979) represented out-of-the-box thinking at its best. Can you imagine a filmmaker trying to make a film like Syed Kamal’s ‘Insan aur Gadha’ (1973) today?

Your first feature film as director – the 2013 ‘Zinda Bhaag’ – did the impossible by achieving both critical and commercial success. What made the film work?

Meenu: It is difficult to pinpoint exactly what made Zinda Bhaag work but, cheesy as it may sound, I would say that the film was successful because it was made with a lot of heart and people could see that on screen.

Farjad: There was something truly magical about the energy that went into making ‘Zinda Bhaag’. The cast and crew put their hearts and souls into the film. We can never forget all that they did to make Zinda Bhaag the film that it is.

Meenu: ‘7 Din Mohabbat In’, like all of our films, explores the subject of ‘failure’. When we were growing up, people who did not do well – the losers and the outcasts – were still considered heroic. The films of that time also depicted the belief. The outcast hero was an archetype. Things have changed and the pressure to do well and succeed in life has become monstrous over time. In ‘7 Din Mohabbat In’, the hero of the film, Tipu, is a big loser and the film is a coming-of-age story in which he finds his true self.

The cast of ‘7 Din Mohabbat In’ is led by two of Pakistan’s biggest stars, Mahira Khan and Sheheryar Munawar. How were the two selected for the film?

Farjad: We had pictures of Neeli and Tipu in mind at the writing stage. Mahira Khan and Sheheryar Munawar fit those pictures to a tee.

Did the two actors deliver to your expectations?

Mahira Khan has an innate spontaneity, a sense of wonder, and a penchant for fun that she used, very effectively, to bring her character, Neeli, to life in the film. I do not think any other actor could have played the role better than Mahira did.

Sheheryar Munawar is an inventive actor who can go from benign innocence to threatening aggression at the drop of a dime. He did very well in ‘7 Din Mohabbat In’.

Meenu: Working with Mahira Khan and Sheheryar Munawar was a real joy. The two of them are very talented and consummate professionals. Farjad and I are huge believers in rehearsals and have a defined process with actors that we have followed since our very first film. Mahira and Sheheryar participated in process wholeheartedly and brought a lot more detail into their characters than had we started with.

Sheheryar plays the role of a lower-middle class, Karachi boy. I think his transformation from Sheheryar Munnawar to Tipu is truly exceptional. Mahira’s Neeli is a funny, romantic and spunky young girl who writes sentimental poetry and views the world through rose-coloured glasses. Working with Mahira, I noticed that, unlike a lot of actors who focus only on getting their individual characters right, she keeps an eye on the entire film, in terms of genre, and has an innate talent to pitch her performance perfectly to suit the film. Her Neeli, as a result, is flawless, in my opinion.

‘7 Din Mohabbat In’ is a romantic comedy unlike ‘Zinda Bhaag’ which was a drama. Did you find directing a comedy to be more challenging than doing a drama?

Meenu: No, not really.

All our films are cross-genre and incorporate elements of comedy, drama and a lot else. The challenge is to balance the various elements in a manner that each flows into another. ‘Zinda Bhaag’ was as much a comedy as a drama. Some people consider it to be an art film whereas others think of it as a commercial flick. They are both right. I don’t think that we will ever adhere to formulaic expectations of an art or a commercial film and will always mix things up. ‘7 Din Mohabbat In’ combines elements of several genres – romance, surrealism, comedy, fantasy, and coming-of-age – and cannot be classified only as a comedy.

Do you feel that ‘7 Din Mohabbat In’ will be a commercial and critical success?

Meenu: Yes, I do. It is a hugely entertaining film with great music, awe-inspiring special effects, and exceptional performances. It has comedy, action, glamor, and romance and a multiple star cast. The film promises to be one fun roller coaster of a ride for viewers!

The entire cast and crew of the film put in a lot of time, effort and hard work in making ‘7 Din Mohabbat In’. Now that the film is done, we are hoping for the best.

What is the greatest strength of ‘7 Din Mohabbat In’?

Farjad: I think the film’s greatest strength is its newness. We have tried to break new ground with ‘7 Din Mohabbat In’ and taken a lot of risks. That is what makes the project so very exciting. The credit goes to our producers at Dawn who supported and encouraged our inventiveness. 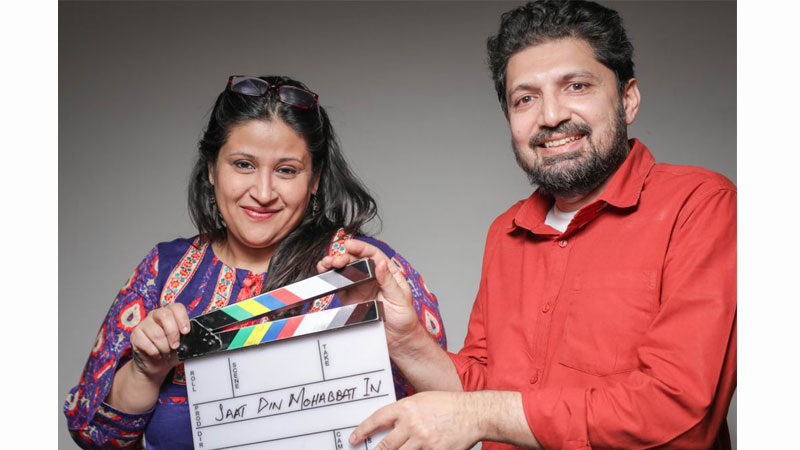 Who has composed the music for ‘7 Din Mohabbat In’?

Farjad: A number of very talented people have contributed to the music of the film. Shuja Haider has put the lyrics of the legendary Piyush Mishra to music, in a song that promises to be the romantic song of the year. The esteemed Arshad Mehmood has composed a fun wedding song that is sure to become very popular. Shiraz Uppal and Waqar Ali have composed a song each. I must also mention Shani Arshad who has not only composed a lovely song for the film but also scored its background music. He is a wonderful musician and has done great work for the movie. We had the insight and expertise of Hameed Haroon, the CEO of the Dawn Media Group, on our side, as well; that was a huge advantage in the making of the music of the film.

You have always worked with your producer husband, Mazhar Zaidi, and director friend, Farjad Nabi. What binds the three of you together?

Farjad: Having no money!

Meenu: But a heart full of love. Jokes aside, I think we are quite a trio with very different talents and sensibilities which, when they come together, are perfectly balanced.

Our company, Matteela Films, started as music studio in Anarkali, Lahore, in 1999. We did the music album ‘Awazay’ for which Sain Zahoor won the BBC World Music Award. We have since made several experimental and critically-acclaimed documentaries, including ‘Nusrat Has Left the Building’. We did a music travelogue in Sindh for BBC Urdu titled ‘Aaj ka Beejal’ and, recently, mounted an art show in Karachi titled ‘Art Sab Ka: Pakistani Cinema Reflected’. Farjad is a published Punjabi playwright and Mazhar does stop motion animation. The three of us dabble in everything including film, music, art, animation, and scholarship. Somehow, I feel that we may not be able to accomplish individually what becomes possible when we work together.

The writer lives in Dallas and writes about culture, history, and the arts. He tweets @allyadnan and can be reached at . Photographs have been provided by Matteela Films