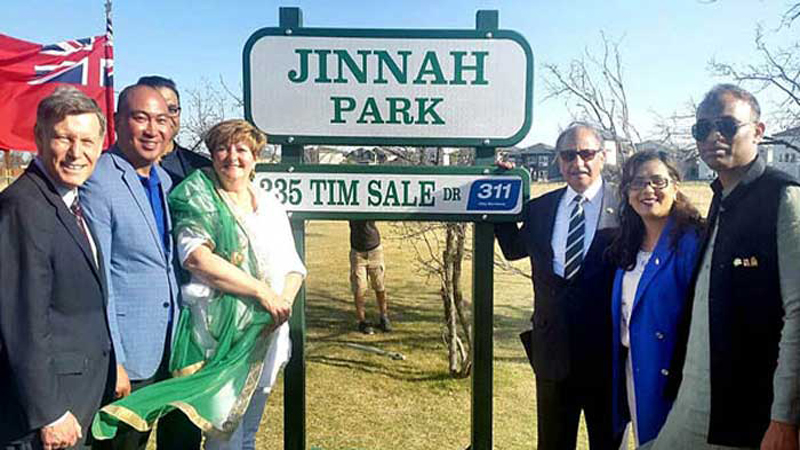 In his address, the high commissioner said the credit went to the vibrant Pakistani-Canadian community in Manitoba which had succeeding in naming a public park in North American after the Quaid-i-Azam. He said that this was a tribute to the great sacrifices rendered by Pakistan’s founding fathers in order to have a separate homeland for Muslims in the subcontinent.

The high commissioner, while appreciating the struggle of the Pakistani community, referred to a quote of Quaid-i-Azam Muhammad Ali Jinnah, “With faith, discipline and selfless devotion to duty, there is nothing worthwhile you cannot achieve”. He said the Pakistani community in Winnipeg has always promoted and showcased Pakistan’s culture and projected a soft image of the country by holding cultural galas. They act as a bridge in promoting understanding between communities, he added.

Dr Rashid Bahri, a community leader who led the campaign for Jinnah Park, said in his opening remarks that Muhammad Ali Jinnah was closer to the hearts of the people and the park will remind future generations about Pakistan’s great leader.

Masrur Khan, president of Manitoba PSA, said it was a historic day for Pakistanis in Canada and naming a park in Jinnah’s name showed how much migrant Pakistanis loved the founder of Pakistan.

Terry Duguid and Iqra Khalid, members of the Canadian Parliament, also addressed the ceremony and congratulated the Pakistani community on achieving this milestone.

City Councillor Janice Luke said on the occasion that she was very happy to work with the Pakistani community to ensure maintenance of the park and to make it worthwhile for the families to visit and hold cultural galas in there. She said they would prepare a cricket ground within the park area where local cricket tournaments would be organised.