Issues and options of migratory birds

Past winter, when I was driving towards ‘Chilia Fish Farm’ near Thatta, I saw in many roadside villages, people holding 5-6 birds in each of their hands. They would come forward as they saw any car. At one point, I parked my car to have a cup of tea. Initially one person ran towards my car, and in next few minutes, nearly six more surrounded and tried their rural selling tricks. None was going to convince me.

Just Rs 1000 for these 10 birds, one man spoke. Pushing him aside, another man came, just 800. I was gazing into their poor faces. Before I could say something, the first person loudly asked to a chapra hotel nearby, Sahidkochaepilao, Kark.

Ok, I am ready to purchase all these birds, on the condition that you will accompany me to the water bodies where I could set these birds free. You can’t do that, baba, one villager replied. Their legs and wings are broken. But why, I asked with anger. So that they may not run away, one replied.

I came to know that in the winter months, villagers find hunting birds as profitable business. Kenjhar Lake is hardly 12 km away from Karachi where scores of people come for excursion and this establishes a lavish market for selling of migratory birds.

People involved in this act have stories to convince the buyers. Meat is not only delicious but best medicine against Polio victim. The blood of these birds if applied topically at your joint, the issue will vanish forever, and many more marks.

Millions of wild birds migrate from various water bodies of Russia, Siberia and other Central Asian states towards Pakistani waters every year at the onset of winter, usually starting in September. These birds leave their ice-covered lands and move thousands of miles away to escape the severe cold and the scarcity of food. 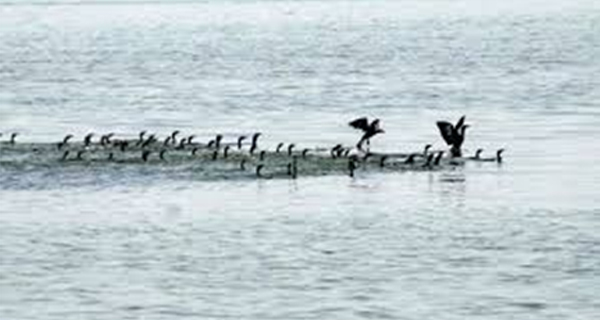 There are reports that, almost 70 per cent of the migratory birds that enter Pakistan find their way to the wetlands of Sindh, but in recent years a trend has been seen where these birds are hunted down any moment for income.

Hunting and netting of birds, is not just for recreation and for trade purposes, but there are manmade stories regarding health benefits of their meat and blood against hemiplegia. Hunters even kill the threatened and endangered species viz. houbara bustards, cranes, herons, pelicans, storks, spoonbills, flamingos, marbled teals, cotton teals, spot bill ducks, common shelducks and woodcocks which are declared as Protected Species of Sindh.

According to estimate, an estimated population of one million aquatic birds migrates to Pakistan, in general, and Sindh during winter season as the mercury in north drops down to -30 degrees Centigrade. Since Sindh has large water bodies, most of the birds prefer to stay in wetlands along the Indus River. These freshwater wetlands of Thatta and Badin are located in lower Sindh. These water bodies provide suitable habitat and feeding opportunities to a wide variety of water-birds passing through Indus flyway.

Lake Lungh, Lake Hamal and Lake Drighin Larkana, and Haleji, Hadero and Keenjhar lakes in various habitats of Thatta districts are preferred wintering habitats for migratory water-birds which enjoy their winter in 45 sanctuaries and reserves spread over an area of about 900,000 hectares in Sindh (Rizvi, 2004).

Sindh province is regarded as welcoming ground for the millions of migratory birds from Siberia during winter season. These migratory birds are suspected to carry a wide range of viral, bacterial, fungal and protozoan zoonotic pathogens either being themselves diseased or being seemingly healthy carriers, or the hosts of infected vectors (Hubálek, 2004). Therefore there is dire need of broad base research to establish data on zoonotic infections transmitted by the migratory birds.