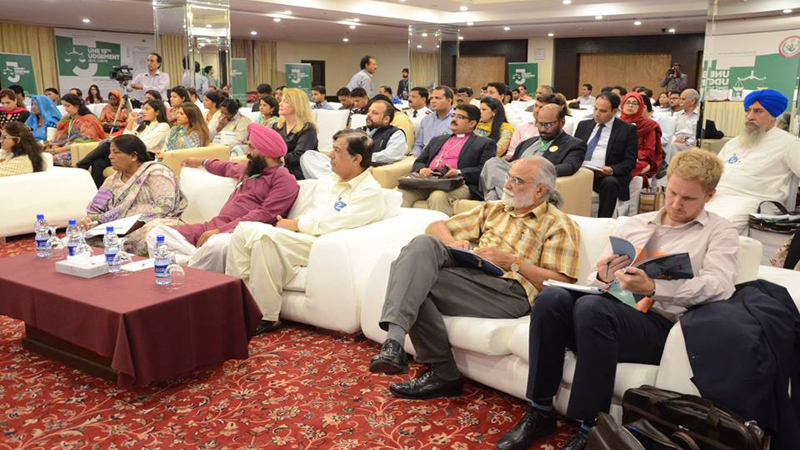 The National Commission on Human Rights (NCHR) ended the two-day minority convention with a resolve to bring out a whitepaper that would capture aspirations of religious minorities and the progress made so far on the landmark June 19, 2014 judgement and present it before parliament as most of the panellists spelled out that not much had been achieved since the passing of the judgement and there was a need to mainstream the judgement so that equality and dignity of non-Muslims could be achieved.

The Supreme Court of Pakistan gave a judgment on June 19, 2014, directing authorities to to protect religious minorities.

The National Commission of Human Rights (NCHR), with the collaboration of Community World Service Asia organised a national convention on the landmark judgement in the federal capital the country on May 9 and May 10, which drew representatives of religious minorities, scholars, intellectuals, parliamentarians and government officials from all parts of the country.

Former chief justice of Pakistan Tasadduq Hussain Jillani took suo motu notice of suicide bombing in All Saints’ Memorial Church in Peshawar that took place on September 22, 2013 and left at least 127 dead and another 250 injured.

The judgement was announced on June 19, 2014 with the following seven instructions to the government: constitution of a team at a federal level to develop a strategy for promoting religious tolerance, develop appropriate curricula for primary, secondary and tertiary levels of education that promote religious harmony and tolerance, curb hate speech in social media, constitute a national council for minorities, establish a special police force to protect the worship places of minorities, enforce the 5 percent minority quota in government jobs and prompt action, including registration of a criminal case, whenever constitutional rights of religious minorities are violated or their worship places are desecrated.

MNA Ramesh Kumar Vankuwani, who has recently joined Pakistan Tehreek-e-Insaaf (PTI) shared with the participants how Justice Jillani summoned him to be an amicus curie. “I told the court that I was not a lawyer but still Justice Jillani insisted and provided me with a lawyer.”

According to media reports, the Punjab Higher Education Department informed the SC bench, which was hearing the case in December 2015 that a committee had been constituted that had given seven recommendations on curriculum reforms. The SC bench was told that “myopic interpretation” of religion would be taken out of the curriculum and students would be encouraged to learn Islam’s spirit of pluralism”. “This is the only area where Sindh and Punjab governments had made progress but still it would take time to take its final shape,” said Vankwani.

The other area was protection of religious worship places of minorities. But the fact is otherwise. “Six churches were recently closed down briefly in Abbotabad in the name of security because the church management was unable to set up its own security, which was responsibility of the state in the first place.”

“Then the other aspect of the judgement was creating an autonomous commission, which could focus on religious minorities. There is currently a Minorities’ National Commission, which is headed by headed by Sardar Muhammad Yousaf who is minister of Religious Affairs and Religious Harmony Ministry. The commission was established in 1990 but after this judgement, the government revived it through an executive order.”

The Ministry of Religious Affairs is mainly responsible for pilgrimage travel to Saudi Arabia and many religious leaders from minorities have express their concern that the “commission was not an impartial and legislative body so there was need to create a more independent body which is run by religious minorities”.

Recently, Pakistan’s National Assembly’s Standing Committee on Religious Affairs was told that the National Commission for Minorities was established in 1990 but there were no rules of business stipulated and even its legal status is “not clear”.

“Similarly, no measures were taken to constitute a special police force for the protection of worship places of religious minorities. Back in February 2015, Punjab chief secretary Khizar Hayat Gondal told the SC that minority parliamentarians and religious leaders had informed the Punjab Chief Minister Shahbaz Sharif that there was no need of raising another force for this purpose and the protection of worship places was quite satisfactory in the Punjab and reasonable security was being provided. Since then there was no other development, the commission noted.

“That is the reason I left the ruling Pakistan Muslim League-Nawaz because it assured me that the head of the Evacuee Trust Property Board would be a non-Muslim but this was never realized,” Vankwani told the gathering.

Vankwani later told the Daily Times after the convention that no work had been done on any aspect of the judgement except removing hate material from curricula. “The federal commission with an executive order is only for issuing permission to sell properties that belong to religious minorities of Pakistan.”

The chairman of the National Commission for Human Rights (NCHR), Justice (r) Ali Nawaz Chowhan, told the convention that the “the judgement amplifies Article 20 and rest of the constitution as principles of policy about Islamic way of life are misinterpreted”.

Chowhan said that the constitution allows minorities to propagate their faith but situation was yet different on the ground. He said that the curriculum developed in some of the provinces imposed Islamic way of life on non-Muslims which was illegal and unconstitutional.

“There is religious hatred and people are not indoctrinated with religious harmony, which should permeate to the grassroots level from where problems like blasphemy are arising. But it is not happening because the Religious Affairs Ministry is dormant and not performing its due duty in the manner it should,” said Chowhan, adding, “The NCHR has dearth of funds otherwise we would spread this message to the grassroots level.”

But Pattan National Director Sarwar Bari saw the fundamental human rights guaranteed in the constitution in a different light. “Our constitution, laws and public policy by and large conform to international standards but the problem was with many counter wailing factors that take over the system.”

“So the judgment alone is now enough. There must be mechanisms developed to overcome those counter-wailing factors. ”

A similar view was expressed by human rights lawyer Atif Jamil, who said that the judgement treated minorities as an object, who needed protection from the rest of society. “Minorities should be seen as equal citizens of the country and not a people who are alien or temporarily residing as refugees.”

Currently, most of religious minorities in Pakistan, especially Christians, believe that education quota was the only way to bring minorities on a par with the rest of the society. MNA Asiya Nasir had presented a bill titled ‘The Minorities Access to Higher Education Bill’ on this demand but it was rejected by the National Assembly after Higher Education Commission Chairman Dr. Professor Dr Mukhtar Ahmed and others appeared before the parliamentary body and stated that proving any quota would be contradictory to the spirit of merit.

Dr. Ahmed, who has now retired, was also among the panellists said, that it was not his personal decision but it came from most of universities. “However, I also believe that we should not go for quota but encourage our minority students to compete and excel.”

“If this nation has to rise, it has to invest in education. Education is the remedy to all sorts of discrimination. We should provide between 2000-4000 scholarships to the youth to encourage the youth towards higher education. It is our duty to provide equal opportunities to everyone. But not through quotas for the marginalised.”

Balochistan Public Service Commission Chairman Justice (r) Kailash Naath Kohli said extremism be removed and the subject of ethics should be introduced instead of Islamic studies for religious minorities.

Khyber Pakhunkhawa Public Service Commission Chairman Fareedullah Khan assured the audience that he would assured that minorities were given their due representation in government jobs. “This is my highest moral commitment and you all are invited to guide me on how to go about it.”

Chaudhry Shafique, member of NCHR, said that despite so much discussion on the June 19 judgement, there was still a need to capture all aspects of the judgement and also how far progress had been made since the passing of it.

At the end of the convention, NCHR Chairman Justice (r) Ali Nawaz Chowhan concluded the convention with an announcement that a committee comprising intellectuals and activists would prepare a whitepaper to be submitted to parliament, Senate and other human rights bodies.