Why is ‘Ducky Bhai’ trying to bring down Sham Idrees and ‘Froggy’? 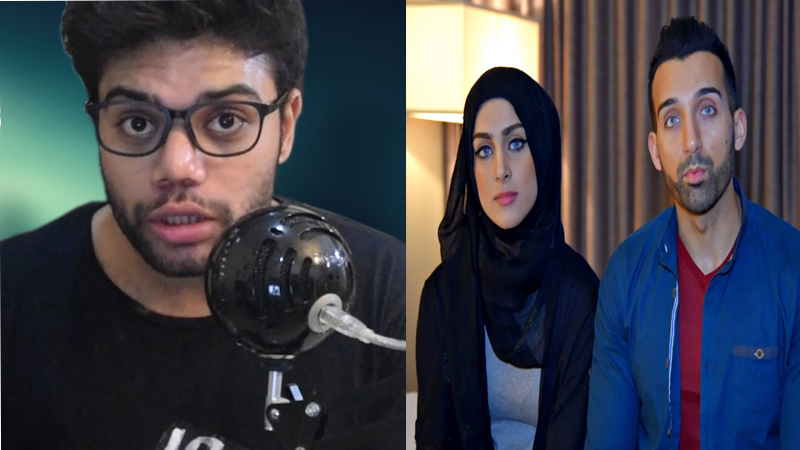 If you’ve been to YouTube in the past couple of days you’re bound to have come across a brewing storm among the Pakistani YouTubers weighing in on clash between social media celebrity Sham Idrees versus newly entering ‘Ducky Bhai’. Over the past 48 hours, Sham Idrees and Froggy released two separate videos reiterating their stance about Saad Ur Rehman aka the ‘Ducky Bhai’ and within a few hours the latter uploaded a response and was followed by dozens of videos by other YouTubers weighing in.

It appears as a classic case of entitled brats playing victims versus an urban commoner trying to make it. Sham and Froggy’s responses to Ducky reek of snobbish behavious – so much so that in their ‘dis track’ song aimed at haters, they actually implied that they were being attacked because those criticising are sad because they don’t have money or a car. I mean who says that? There’s no grace in success if you have no humility and if you rub it in other people’s faces like that.

What started from a harmless roast has turned into a full-fledged battle of words with both sides calling each other names in their attempts to ‘expose’ each other. Instead of taking the roast gracefully, Sham decided to respond rather drastically and went on to file copyright strikes against Ducky’s videos which resulted in deletion of his Facebook page that had over 200,000 followers. Way to gracefully handle the criticism, no?

The loss of such a major social media property led Ducky to make more videos against the duo which eventually led many prominent YouTubers to side with Ducky and speak up against Sham Idrees and Froggy. Now, if Facebook decided to delete the page then Ducky must have broken rules and policies, right? But his supporters – including many prominent YouTubers – say that reporting him on copyright grounds was rather harsh and petty and was done with the intent to silence him.

The YouTubers who have come out in support of Ducky bhai include Daniyal Khan Tareen and Awesamo Speaks/Khujlee Vines – a group that has performed with Sham Idrees in the past.

There’s one thing in common between Sham/Froggy and Ducky. Both seems to have utter disregard for the other’s talent. But the credit has to be given where due. Ducky has shown excellent promise by making it on his own. He’s got potential and has already become a prominent YouTuber who constantly has his videos trending. Sham/Froggy may be entitled but they’re good actors and entertainers.

The heated exchange intensified after Sham and Froggy termed the critics as ‘tiny YouTubers’ and generalised Pakistanis. Froggy tweeted “You know what’s even funnier? These little 20 year olds don’t have the guts to say this sh** they try to “tweet” on their tiny pages to our faces I wish I could bring them out of their little huts in Pakistan and knock them out cause that’s how small they are. You won’t need to”. Although, after being called out, she said she meant tiny minds when she said tiny huts.

They have heavily criticised Saad’s abusive language, termed his ‘exposés’ as personal attacks and hatred. I don’t know what medium they think they’re using but hello; YouTube, social media and roasting! Tell me how do you do it without the swear words? The Indian YouTube sensation Carryminati does it. The legendary All India Bakchod (AIB) does it. They are all stars and cool but if a Pakistani roaster does the same, how dare they use the swear words? The problem with Ducky is not the swear words. It’s the creepy misogynistic language he uses in his roasts. Uhh, sometimes it’s so cringe worthy listening to him talk that you just wanna shut him down.

Sham and Froggy maintained they are being targeted for views and fame. Froggy also rightly called Saad out for his misogynistic rants in general and his views on slain social media celebrity Qandeel Baloch in particular. Ducky’s attack on Froggy’s hijab is also uncalled for. It’s things like these that will always be an obstacle in the way of him becoming a serious celebrity. Get one thing straight; hijab is Froggy’s choice however she chooses to do it.

As of now more and more responses by ‘tiny YouTubers’ are emerging and no end seems to be in sight. If you ask me, I’d say they have created a PR nightmare for themselves or did they? They’re being talked about by everyone on the social media and as they say no publicity is bad publicity but I’d still recommend them to hire a reasonable publicist and start making mends. Know that criticism does not automatically mean hate and learn some humility.

And to Ducky I’d say change your attitude towards women, transgender people and effeminate men because right now your videos are creepy and reek of misogyny. Your excuse that you roast people who ‘deserve’ it is not good enough because who you consider as ‘fair games’ other than Sham Idrees are mostly the women social media celebrities like Dhinchak Pooja, Qandeel Baloch or the effeminate men social media stars such as Nasir Khan Jan and Noman Khan. If you truly want to establish yourself as a roaster, you should be able to roast anyone. Yes, that means the ones you idealise as well.