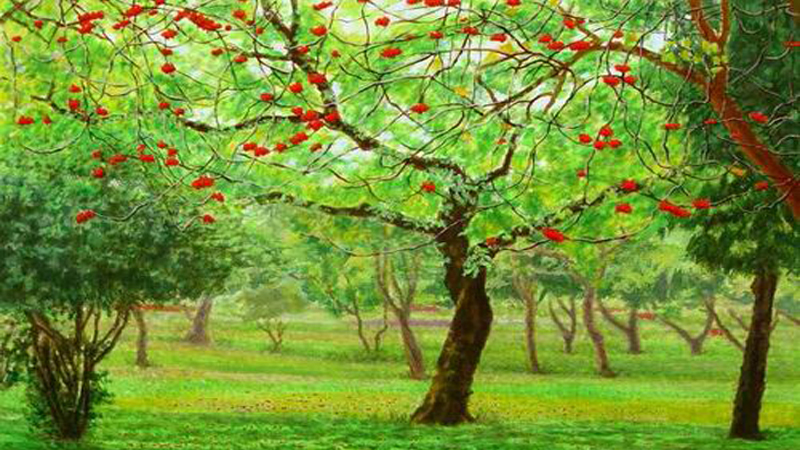 Around 50 artworks have been put on display for the general public, students and people from different walks of life, who thronged to the gallery and not only took keen interest in the artworks but also admired the artists for producing such wonderful landscapes.

Both senior and junior artists participated from across the country. Most of the artists have used medium oil on canvas. Other artists used water colours on paper and oil on board as a medium.

Kamran Lashari said that all artists very wonderfully represented a beauty of nature and colour of spring in their paintings by using a variety of colours.

Art critic Dr Rahat Naveed Masood in her statement said, “Landscape paintings have been one of the earliest forms of man’s artistic expressions. The Greeks and Romans produced large wall paintings in their buildings, depicting an idyllic world and a visionary Arcadia, that provided a timeless ambience to the surroundings. Over the centuries, evolving in different styles and moods, landscape painting, in the 1700 and 1800s had attained significant acceptability in the hierarchy of paintings. Later in the 19th century, it became a popular genre, gaining permanency, since the need to reconnect with nature became important in the wake of industrialisation. The interest in landscape art as a separate entity was transported to art schools in the subcontinent during the colonial period and the passion thus ignited for this art form is still visible in the flourishing school of landscape painting in the Punjab.”

The present show comprised of a medley of exhibits. From very seasoned landscape painters such as Ghulam Mustafa, Raja Najaul Hassan, Nazir Ahmad, Zulfi, Abdul Hayee and Mughees Riaz to artists who are recent entrants to this filed, it presents a variety of viewpoints of looking at nature. It again draws our attention to the significance of our surroundings and how we relate to them and most importantly our dependence on them as a means of inspiring and satiating our aesthetic and spiritual needs.

The exhibition will continue until May 12.