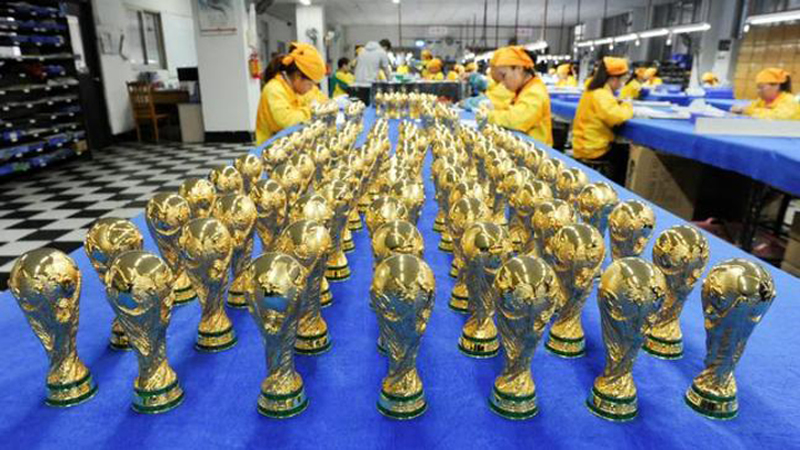 BEIJING: President Xi Jinping’s dream of China hosting and ultimately winning the World Cup may be as far away as ever but that does not mean the country will have no involvement when soccer’s elite meets in Russia later this year. China’s enthusiasm for the global game, undimmed by years of underperformance and corruption scandals, has always reached fever pitch during World Cup finals and that might be even more the case this year with the domestic game finally on the rise. And at a factory in Dongguan in the heart of the country’s southeastern workshop, workers are busy transforming pieces of zinc alloy into thousands of replica World Cup trophies, badges and key-rings for football fans in China and around the world.

It takes at least three days of filing, polishing, electroplating, heating and decorating to produce the replicas with football’s world governing body FIFA insisting on exacting standards for licensed products. “All Replica World Cups are limited to 15cm in height … all Cup replicas higher than 15cm in markets are definitely fake products that haven’t been certified by FIFA,” said Perry Chou, vice-president of the Wagon Group that owns the factory. “Secondly, they must be a certain weight. Thirdly, gold must be involved when electroplating. So within these rules, we are very careful to meet FIFA’s demands on Cup design each time we send our cup designs for to FIFA for review.”

Taiwan-based Wagon had FIFA certification for their products for the last two World Cups in 2010 and 2014 but were restricted to East Asia and North America. This year the company can sell to all markets outside Europe but still expects a quarter of the replicas to find a home in China, where they will range in price from little more than a dollar to 5,680 yuan ($895) for the biggest models. Although many of the replicas will be sold online, they will also be available at retail stores like the “Fans Shop” of Chinese Super League (CSL) club Beijing Guoan in the heart of the capital.

Shop manager Su Meng said he expected sales of official FIFA World Cup merchandise, including mascots and the Wagon-made replicas, to be up around 20 percent on 2014, thanks in part to the growing popularity of the CSL. One 37-year-old Guoan fan, however, was sceptical about the value of replicas and said he would not consider purchasing such a souvenir of the tournament. “Only the real World Cup trophy has genuine value,” banker Sun Wei told Reuters. “This kind of imitation product, I think, isn’t worth spending money on.” Wang Boqian, though, was far more enthusiastic about the copies of the 36.8-centimetre tall, 18-carat gold trophy which has represented the highest ambition for professional footballers since it replaced the Jules Rimet Trophy in 1974. “I think it’s the most beautiful trophy in the world,” Wang said. “I’ve always really liked this gold trophy. Every World Cup year, ever since 1998, for each one I’ve bought a (replica) gold trophy.”