PTI all set to form a majority government in 2018 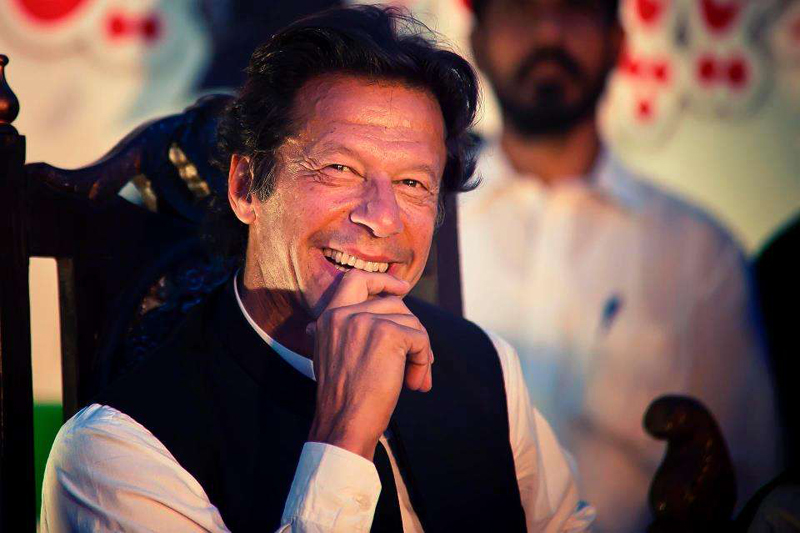 The unprecedented rally at Minar-e-Pakistan on Sunday, April 29 referred to by some journalists as the “Mother of all Jalsas” is an indication that the winds of change has started blowing in Imran Khan’s favour and the voters are making up their minds to elect PTI to form a majority government in 2018. The political pendulum after this rally has swung towards PTI and anyone coming in their way would be run over by a charged-up crowd which is bitter to take revenge on Nawaz Sharif, Asif Ali Zardari and Shehbaz Sharif for their dishonesty, corruption, mismanagement and looting of national wealth over last three decades. While Imran Khan has presented his party’s manifesto in this rally, the upcoming elections would certainly be fought mainly on the issues of corruption, money laundering and misuse of power by PML-N and PPP during their ruling periods after the death of military dictator Zia ul-Haq who rolled back democracy in the country in 1977.

History is witness to ruling politicians’ corruption when governmental institutions supposed to hold ruling politicians accountable and prosecute them for corruption no longer performed their functions, mainly due to the situation in which political executives led by the Prime Minister succeed in exerting their control over those institutions. In Pakistan, the centralisation of power in the hands of political executives, in particular in the hands of Prime Minister, with a view to practice unprecedented corruption, money laundering and misuse of power began as PML-N and PPP took power in last three decades. Due to this corruption and abuse of power, governments of Nawaz Sharif and Benazir Bhutto were sacked without the completion of their terms.

Dr Mahathir Mohamad, former Prime Minister of Malaysia and an honest and upright man, once told CNN “I think it’s the job I have to do. I cannot accept this country destroyed by selfish people who only think about themselves … who steal money.”

It is an open secret that both PML-N and PPP have appointed their cronies without any merit on key positions in the government who in turn aided and protected them for their wrongdoings and fraud. These appointees also helped them funnel outside the country their stolen money. The governments of PML-N and PPP undertook projects during their terms in which kickbacks, commissions and other financial gains were secretly received by prime ministers, chief ministers, ministers, bureaucrats and their nominees. I do not have to go too far back; the recent trial against disqualified prime minister Nawaz Sharif and charges registered in the Supreme Court, High Court and the NAB against him, his ministers, bureaucrats and their cronies for alleged fraud and misappropriation of funds are clear indication of mass corruption and misuse of power.

Dr Mahathir Mohamad, former Prime Minister of Malaysia and an honest and upright man, once told CNN “I think it’s the job I have to do. I cannot accept this country destroyed by selfish people who only think about themselves … who steal money.”  Dr Mahathir Mohamad’s philosophy in governing the country is to first elect an honest and upright Prime Minister who in turn will keep all his ministers and heads of various institutions and agencies honest and thus automatically ensure the honesty of their subordinates. Dr Mahathir Mohamad claimed that in his 22 years of rule, he cleaned Malaysia from major corruption and put it on the road to become a developed country.

It is obvious that Punjab, with 141 directly elected seats in the national assembly, is the main battleground in the elections in Pakistan. It is an irony that when a party takes majority of seats in Punjab, without even taking a single seat in any of the other three provinces and FATA they can still form the government in Center and can control politics, foreign policies, and defence for the entire country (especially in the light of their corruption and self benefits) including those provinces where they have no presence. We all know that PML-N and PPP, on the strength of their ill tactics of “bribery and favours” (not to forget Keema Nans), controlled poor voters, especially in rural Punjab in the elections in last three decades. The roles of judiciary and army unfortunately at times got compromised due to the fact that Prime Minister controlled their appointments and expected from them illegitimate favours as was alleged in some cases in the past. Fortunately, and by the Grace of God, the appointments of current Chief Justice Mian Saqib Nisar and current Chief of Army staff General Qamar Bajwa turned out to be a blessing for the people of Pakistan as these individuals have clearly indicated their support for a free, fair and impartial elections in the country. Their commitment has boosted the morale of honest political parties who believe that this will have a major impact on fair elections in 2018.

Now the question arises, will these steps be enough for PTI to win majority seats in the parliament? The answer is No!

Imran Khan and his PTI have taken a very strong position on the rigging in 2013 national elections and have proved by going to court that rigging did take place in 2013. Also, the Inquiry Commission on 2013 election in their report uncovered major irregularities which need to be addressed by the current Elections Commission. PTI along with other political parties has been demanding electoral reforms to avoid irregularities of the past. It is observed from the statement of Chief Justice of Pakistan that the Supreme Court would like to see free and fair elections and they will react, if need be, to achieve this goal. PTI has formed its own committee to implement steps to keep elections free of rigging and corruption. Now the question arises, will these steps be enough for PTI to win majority seats in the parliament? The answer is No! There are some key elements at the voters’ level that need to be analysed and acted upon before elections. These elements are as follows:

Impact of court judgment on corruption cases against Nawaz Sharif and other leaders of PML-N:

If we analyse the ‘Mujhe Kuin Nekala’ campaign it seems that Nawaz Sharif and his party are viewed as ‘victims of court system’ rather than perpetrators of a crime. 64% of the population which lives in the rural areas has very little or no education to comprehend the implications of Nawaz’s crime. PML-N’s leaders in these areas, who are beneficiaries of monies or favours from PML-N, are misleading the masses by telling lies. Also, the innocent villagers always have sympathy towards so-called victims as they are not told the truth about the crime and its punishment. The situation in urban areas is relatively different however. Beneficiaries of money and favours also exist in those areas. One of the talk show hosts (perhaps the beneficiary of PML-N favours) believes that conviction of Nawaz Sharif and his people would have only 5% impact on voters to go against PML-N in the elections. I personally don’t agree but still believe that PTI should launch campaign at the grassroots level in the villages by installing their camps and using locals to explain the impact of Nawaz’s crime on their livelihood. This situation is parallel to what students and Sufis did in NWFP referendum at the time of partition of India. PTI should also assure the villagers that they would retain the same benefits as they get currently from PML-N if they vote for PTI.

Influx of electable from other political parties:

The constant influx of MNAs, MPAs and other electables from PML-N, PPP and JUI (F) is extremely positive for PTI. This influx will further increase after the interim government takes office. While these electables contribute positively to the party it may also create some problems for PTI due to the political baggage they carry from their previous parties as well as the question of their loyalty and integrity. I believe that central committee of PTI must look into these cases carefully as any unwanted entries may cause more friction within the party than it’d bring advantage. Although a huge number of prominent electables has already moved from PML-N and PPP in Punjab and Sindh, there is still a need to bring into PTI some prominent political figures from these provinces.

Role of media to provide level-playing field to PTI:

We have noticed that some media anchors are still sitting on the fence and are not feeding the viewers with the actual political situation of PTI. However, we noted a favourable shift in most TV channels after the Minar-e-Pakistan rally on Sunday. The restriction imposed by the Supreme Court on self publicity from government funds in media has also impacted the publicity of PML-N and PPP. The permanent media cell of PTI should counter unfair analyses or comments instantly by going on the air for clarification. It has also been noticed that PML-N and PPP are using some foreign media such as New York Times, London Gazette, Indian Times etc to publish untrue stories about PML-N and PPP standings in the polls or their chances of winning elections in 2018 based on false census or opinion polls. PTI must contradict that news by offering true statistics.

A conservative estimate based on the opinion polls and the influx of electables is that PTI will win about 140, if not more, in directly elected seats in the assembly and will form the majority government in 2018. It is predicted that they will capture about 80 seats in Punjab, 20 seats in Sindh, 25 seats in KP, 14 seats in Balochistan and FATA and at least 1 seat in Islamabad.

The growing popularity of Imran Khan and PTI based on their performance in KP, their membership drive at the grassroots level in Punjab and Sindh and the influx of electables from PML-N and PPP is causing some unrest on the political horizon. The Minar-e-Pakistan rally on Sunday has confirmed the fact that PTI is on an upward swing in the public opinion polls and the party has to watch their public statements on controversial issues. A conservative estimate based on the opinion polls and the influx of electables is that PTI will win about 140, if not more, in directly elected seats in the assembly and will form the majority government in 2018. It is predicted that they will capture about 80 seats in Punjab, 20 seats in Sindh, 25 seats in KP, 14 seats in Balochistan and FATA and at least 1 seat in Islamabad. Provincially, they have a pretty good chance of forming a majority government in the provinces of Punjab, KP and FATA.

One can compare this trend in popularity of Imran Khan with Zulfiquar Ali Bhutto who swept the 1977 elections by capturing most of the seats, though some by rigging the polls. The most difficult job which Imran Khan will face after the elections is managing a country which is completely in disarray and is almost on the verge of bankruptcy. He may have to bring a large force of skilled overseas Pakistanis to help him put the highly corrupt and disorganised country in line with better managed and corruption free countries. If Dr Mahathir Mohamad can do it in Malaysia, Imran Khan can do it in Pakistan.

The author is a political scholar and analyst based in Toronto, Canada