Can women be political in Pakistan? 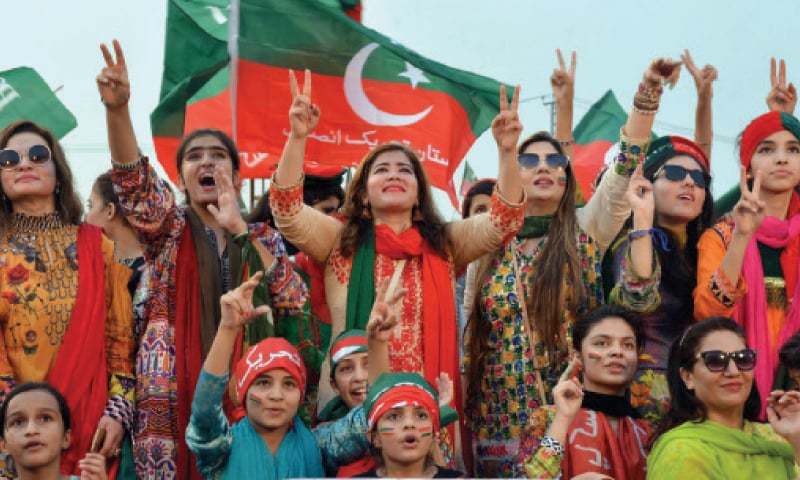 What exactly does it take to be political and female in Pakistan? A thick skin or a profound absence of any physical inclinations of appearing to be a woman? Especially in the Parliament because then you are just asking for it. Especially in a political jalsa because then, you are definitely asking for “it” and a whole lot more. If you as a woman, despite all odds stacked against you, want to be political in this great nation-state then you better leave your “woman-ness” at home, where it really belongs.

Sarcasm aside, the recent events attacking women in the political sphere cannot be trivialised, even though they are and will continue to be, as per our grand tradition. Mazari’s nickname should be trailblazer in contrast to the one made popular because she is not afraid of cheap gimmicks employed to intimidate her voice in the sacred parliament where the constitution of Pakistan protects her rights. The women who attended PTI’s jalsa should, quite frankly, be flattered by what Rana Sanaullah had to say about them because it is an uncontested indication of them being in the right.

Andrea Dworkin, in listing down all the tenets upholding the institution of patriarchy mentioned “the power of naming” as one of its weapons. This very weapon is being used since time immemorial to label, attack, terrorise, and discourage female political participants and politicians in Pakistan. And to witness an “honorary” provincial law minister naming and shaming women for their presence at a political gathering, of their own will and agency, as an exercise of their fundamental rights again given by the very constitution of which he is a sworn-in guardian, is nothing short of despicable.

Let’s face it, it is easy to attack and malign women in Pakistan. According to men in power, all women who participate in public forums and step out of their houses are enticing them with a big, fat bull’s eye. Only those women can be respected and protected who are either daughters of the political bigwigs, are playing on your team or are genetically related to you. The rest are easy targets. The rest are seen as “prostitutes” dancing to the tunes of the devil and voting for him in the elections as well.

Frankly speaking, Sanaullah is not the only perpetrator here, we are all caught red-handed of our inherent and conveniently used misogyny. Labeling political jalsas as “dance parties” or “dating places” is the norm these days, which goes unchecked like the rest of the poisonous patriarchal practices sewn into our social fabric. The throngs of women in a jalsa are not an indicator of political interest, awareness or participation but a “party” barometer because of course, women cannot actually be interested in politics, right?

With women holding only 21% of parliamentary seats and not being able to break the glass ceiling of the government, with the example of Benazir Bhutto pompously thrown in every woman’s face who demands more parity in governmental institutions with a complete disregard of the required situational and personal context, with female parliamentarians made to feel like the only protest they can muster against harassment in the assemblies is to self-immolate, and with such esteemed male politicians refusing to publicly apologise for their actions and to then make lewd jokes in a press conference assuring the masses that their idea of masculinity will keep on defining the right kind of femininity for the nation, are reasons enough to not have any expectations whatsoever.

The party that introduced the Women Protection Bill as its supreme act of governmental gallantry and the party who has an heiress in the making, really needs to revisit its true ideology. Funnily, such parties never cease to chant the slogans of women empowerment when their daughter – who is also opportunely crowned as the daughter of the entire nation – comes to claim her rightful throne.

But, the unsung daughters of commoners and civilians should venture into politics at their own risk and then should also bear the brunt of smaller female numbers on political platforms as their personal failing. We blame them for what we do to them and then we do not even acknowledge them. We name them, we shame them, we advise them to not attend protests and political gatherings, to not voice their opinions, to not expose themselves to the venom awaiting them, but we never name and shame those who spew this venom with the utmost of aplomb and recruit an army to uphold the custom forevermore.

Is a formal condemnation enough? A condemnation that obviously goes for the redundant “all women are our mothers, sisters and daughters” narrative? No sir, these women are not your mothers, sisters and daughters and they do not wish to be at all. They are rightful and legal citizens of Islamic Republic of Pakistan and come under the guaranteed protection of the constitution which safeguards their rights of freedom of movement, freedom of assembly, freedom of association, profession and speech, among many others.

They do not have to be related to you to exercise their fundamental rights or get the respect that they deserve as willful political participants, opinion leaders and future game-changers. The day we start seeing women as autonomous political agents rather than someone’s biological by-product or an easy target would be a different day for Pakistani politics. And a frightening day for misogyny.