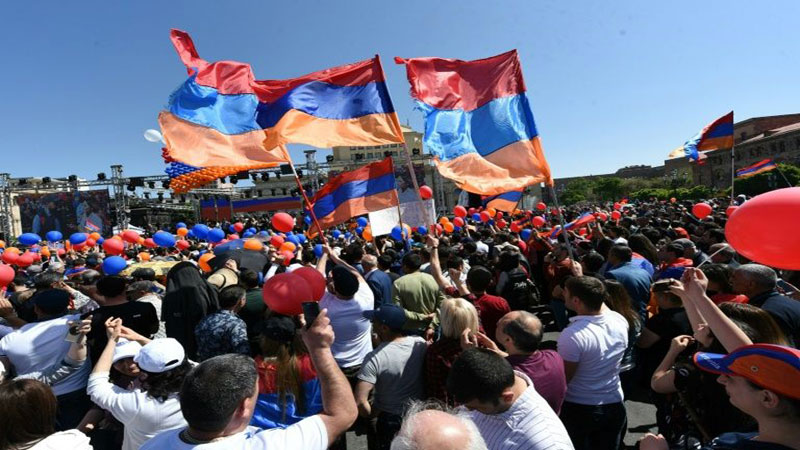 Armenian opposition leader Nikol Pashinyan on Tuesday urged his supporters to launch a campaign of civil disobedience and block key transport links including an airport after he failed in his bid to get elected as prime minister.

“From 8:15 am tomorrow (Wednesday) all roads should be blocked, I announce a general strike,” Pashinyan told tens of thousands of supporters gathered in the capital Yerevan’s Republic Square.

“A revolution of love and tolerance is continuing,” he said, also urging people to turn out for a huge rally Wednesday evening as the crowds chanted “Nikol! Nikol!”

The parliament had voted 45 in favour to 55 against Pashinyan, with the ruling Republican Party rejecting his candidacy after hours of deliberations during a day-long extraordinary session.

“The political force which declared a war against its own people has destroyed itself,” Pashinyan said in parliament after the vote.

“No one will be able to take victory away from the people.”

The Republican Party headed by the ousted former prime minister Sezh Sarkisian withheld support for the protest leader despite tens of thousands massing in the streets and Pashinyan warning that the lawmakers’ unwillingness to back him could lead to a “political tsunami.”

Protesters late Tuesday pledged to ramp up pressure on the authorities to force the ruling Republican Party to quit power.

“The entire country is united in its demand that the Republicans’ rule must end,” said Laura Shahverdyan, a 22-year-old student.

Anait Tolmasyan, a 63-year-old pensioner, added: “We all only have one demand: the Republicans must go. Nikol is the true leader of the Armenian people.”

The small South Caucasus country has been in the grip of a severe political crisis for the past few weeks.

Pashinyan, who spearheaded the mass protests that led to the resignation of the veteran leader Sezh Sarkisian last month, has insisted that only he can rid the poor ex-Soviet nation of corruption and poverty and conduct free and fair elections.

Pashinyan, who spearheaded weeks of mass protests that led to the resignation of the veteran leader Sarkisian last month, has insisted that only he can rid the poor ex-Soviet nation of corruption and poverty and conduct free and fair elections.

He had been thought to be just a handful of votes short of a majority in parliament.

Ahead of the vote lawmakers from the Republican Party grilled Pashinyan on a number of technical issues in an apparent effort to make him appear incompetent.

Eduard Sharmazanov, vice speaker of parliament and the Republicans’ spokesman, excoriated the 42-year-old former newspaper editor, implying he was unpredictable.

A lawmaker from the Elk coalition that nominated Pashinyan, Edmon Marukyan, accused the Republicans of leading the country into a “dead end.”

A source familiar with negotiations had told AFP earlier Tuesday that the Republican Party leadership was clinging to power and opposed Pashinyan’s election.

The source said Pashinyan and the Republicans had struck a backdoor deal several days ago, but it appears that the ruling party backed out at the last minute.

Pashinyan had secured the backing of two other key parties including Prosperous Armenia.

But ahead of the ballot he was at least seven votes short of the 53 he needed from the 105-seat legislature, where the Republican Party has a majority.

Observers and the international community have expressed concern that the turmoil could destabilise the Moscow-allied nation.

Armenia is dependent on Russia economically and militarily and Pashinyan has said his premiership would not threaten traditionally tight ties with Moscow.

Armenia has for decades been locked in a bitter dispute with Azerbaijan over Nagorny Karabakh, a breakaway statelet with an Armenian ethnic majority that is internationally recognised as part of Azerbaijan.

Azerbaijan has closely watched the political crisis, with analysts warning Armenia’s arch-foe could use the turmoil to its advantage.

One Azerbaijani lawmaker, Gudrat Gasanguliyev, called on Tuesday for a special session of parliament, citing the prospect of “civil war” in Armenia.