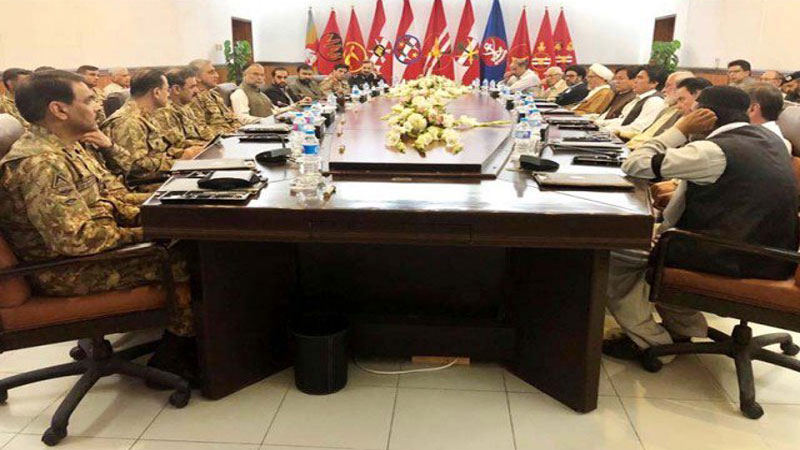 QUETTA/LAHORE: As the third day of the two sit-ins staged by members of the persecuted Shia Hazara community came to a close on Tuesday, Chief of the Army Staff Qamar Javed Bajwa landed in the city ‘to review security situation’.

The visit came in the wake of calls by protesters for the COAS to visit the city and personally assure them of action against those responsible for targeted attacks on the members of the community.

A meeting between the COAS and a delegation led by provincial law minister from Majlis Wahdatul Muslimeen (MWM), Agha Raza, ended last night with an assurance that action would be ensured against perpetrators. The Hazara delegation assured that the sit-ins would end.

Raza had led the sit-in on Zarghoon Road near the Balochistan Assembly.

Meanwhile, in a separate camp in front of the Quetta Press Club, Hazara activist advocate Jalila continued her sit-in, refusing to join the talks at the Cantonment. She said the COAS was not in Quetta city, he was in Quetta Cantonment. Haider asked the COAS to visit the Hazara families in the area where sectarian militants had targeted them.

Haider and several other Hazara activists have condemned the state institutions for what they say is state patronage of sectarian militants. They have demanded arrest of Ahl-e-Sunnat Wal Jamaat Balochistan leader Ramzan Mengal who allegedly enjoys police security despite involvement in hate speech against the minority Shia community.

Earlier on Tuesday, civil society and progressive political parties held protests in solidarity with Hazara activist seeking security of life for their community members in Quetta. Demonstrations were held in Karachi, Islamabad, Lahore, Peshawar, and Hyderabad to express solidarity with the protesters in Quetta.

The protesters included dozens of Hazara citizens of the country who demanded an end to targeted attacks against them.

A social media campaign to support the demands of the Quetta protesters also took place on Tuesday and #QuettaCallsCOAS #EndHazaraGenocide remained trending topics on Twitter.

Speaking to Daily Times on Tuesday, protesting law minister Agha Raza said, “Army chief’s visit is the demand of the victims’ families and the MWM will not back out,” adding that the protest began on the wishes of the heirs of the victims and will end only when they are satisfied with the authorities’ assurances.

He said that the number of terrorist attacks did reduce in Quetta after the military operations, but the violence had not completely ended. “The Hazara-Shias of Quetta have been on the receiving end of targeted killing for decades and banned terror outfits which claim responsibility for the killings are given a free hand by the state. The terrorists continue operating after changing their names.”

Raza further said the community wanted security from sectarian terrorists and only the army chief could assure that. “It is the failure of the National Action Plan (NAP) that the violence against Shia-Hazara community of Quetta has continued unabated, and those who have clearly threatened them and accepted responsibility for the killings are not being acted against,” Mutahidda Qaumi Movement (MQM) MNA Ali Raza Abidi told Daily Times.

On Monday, Interior Minister Ahsan Iqbal and Balochistan Chief Minister had visited the sit-in camp near the provincial Assembly to hold talks with Agha Raza who refused to end the sit-in.