The Korean peninsula and the Subcontinent

It seems impossible until it is done

North and South Korea may finally be heading towards peace. This was something the world thought was impossible. If a true peace treaty is achieved, both countries will prosper at incredible speeds, especially the one that is lagging. Ultimately, it is the smaller country who benefits more from a situation like this.

After the brutal war in 1950, North and South Korea have been at daggers drawn. Even with the armistice in place, hostilities continued, and no peace treaty was signed. After decades of threats, skirmishes and arms proliferation, things seem to be going in the right direction. As Mr Kim Jong-un puts it, ‘a new beginning’ is upon the Korean peninsula.

Over the past six months things have changed dramatically. Six months ago, Jong-un threatened to reduce South Korea to a ‘sea of fire’. Now he says, ‘we are one nation’. It seems surprising, but this 180-degree turn is no miracle. It is the result of unbridled media coverage and arduous diplomatic efforts from both sides.

As Trump exacerbated the situation with juvenile comments, from ‘Rocket-man’ to ‘fire and fury’, Moon Jae-in understood the situation and manoeuvred accordingly, using every diplomatic weapon in his arsenal. Trump, left with no option, has declared that ‘Good things are happening’ and has acknowledged this achievement. 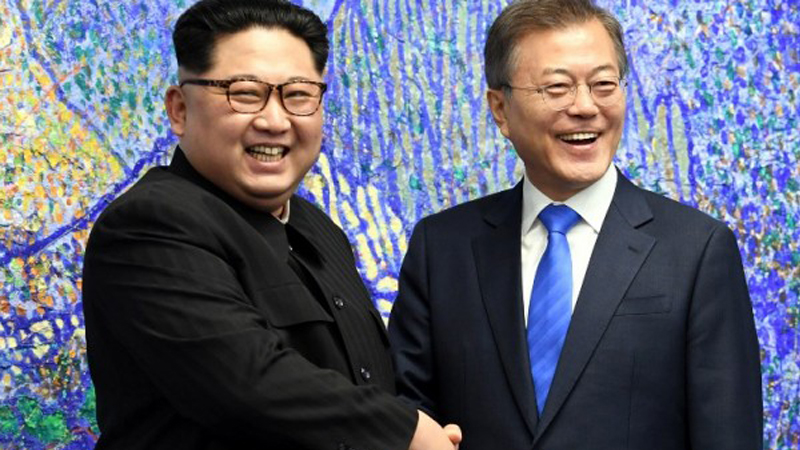 The past year was all about Korea. Every major news channel, newspaper and media house had something to say about North Korea and Kim Jong-un. This unprecedented attention forced Jong-un to ‘settle the matter’ rather than keep it hanging. When he pursued a diplomatic solution, the South showed no restraint whatsoever.

Six months ago, Jong-un threatened to reduce South Korea to a ‘sea of fire’. Now he says, ‘we are one nation’. It seems surprising, but this 180-degree turn is no miracle

The Subcontinent can learn a thing or two from this historic summit. Like them, Pakistan and India share a common culture, heritage, language and ethnicity with an artificially defined border. Commonalities are what the Koreans are using to mend broken ties. But animosity across the 38th Parallel, without a doubt, was much more than Pakistan and India.

What changed was the attitude of both countries and the realisation that compromise is essential. Leaders of both countries took a step forward and kept walking until both met at the 38th Parallel and crossed into each other’s country. Whereas Pakistan and India take one step further and two steps back. For the Korean formula to work, we need a vigorous and stable government who can commence unbridled and frequent diplomatic sessions. Of course, this effort is needed from both sides.

The Winter Olympics were a major milestone for Korea, and for us, it has been, can be, should be, will be cricket. Diplomats from the foreign office must meet frequently to work out lax Visa policies and cross border trade. Only 12,500 visit visas were awarded to Pakistani’s in the year 2017. In comparison 250,000 were awarded to Sri-Lankans.

The situation is the same conversely. Also, policy issues such as the MFN award should not be delayed for years and years. These are solvable problems but seem unattainable due to prolonged failure. These stepping stones will lead us to the Kashmir settlement.

The Koreans are witnessing a new dawn. April 27 will be marked in history as significantly as the fall of the Berlin wall. They have indeed proven that a peaceful solution is always possible. One can only hope that the leaders of Pakistan and India are taking notes.

The writer can be contacted on wahabtariq@hotmail.com