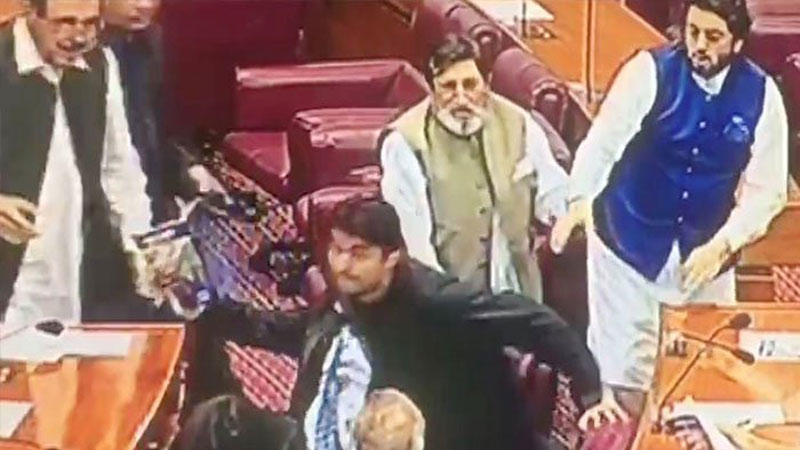 ISLAMABAD: A ruckus was witnessed in the National Assembly on Friday as the opposition parties protested against government’s decision to present budget for entire fiscal year 2018-19 and later staged a walkout from the budget session.

“We are happy to see that another elected assembly is going to complete its five-year term, but at the same time the incumbent government is going to snatch the mandate of the next assembly,” Leader of the Opposition in National Assembly Khurshid Shah said as he criticized the government’s move to announce budget for the entire fiscal year 2018-19.”We don’t have any issue with budget for three or four months, but full-year’s budget is the mandate of the next government, whosoever is elected by the people of Pakistan in the upcoming general elections,” he said. Shah also criticised the PML-N government for elevating Miftah Ismail to the post of federal minister. “Pakistan Muslim League-Nawaz (PML-N) is seeking respect for the vote, but at the same time is itself destroying the sanctity of the vote,” he said, referring to a non-elected person being appointed federal minister for finance and tasked with presenting budget in the assembly.

Shah maintained that government took oath from Ismail by misinterpreting the constitution of Pakistan.”Is there is nobody from two-thirds elected majority of ruling party who can present the budget?” he questioned. It is happening for the first time in the parliamentary history of Pakistan that a non-elected member is presenting the annual budget, he added.

PTI leader Shah Mehmood Qureshi also lambasted the incumbent government over the issue. “State Minister for Finance Rana Afzal is a ‘parliamentary martyr’ because the government ignored him and tasked a stranger to present the budget in assembly,” he said.

Qureshi also declared the budget for fiscal year 2018-19 an ‘anti-federation budget’.”The PSDP allocation in budget is against the spirit of federalism as the three federating units have already opposed the same,” he said.

Soon after Finance Minister Miftah Ismail stood up to deliver his budget speech, Khurshid Shah interrupted him and announced walkout from the House, which was followed by lawmakers of PPP and PTI. However, PTI members returned to the House after few minutes on the request of Parliamentary Affairs Minister Shaikh Aftab, who was tasked by the National Assembly speaker to bring back opposition parties.

Upon their return, the members of PTI torn out copies of the budget documents and staged a protest around Ismail as he spoke from the podium. Several ministers and lawmakers from the ruling party also left their seats and came in front of the finance minister, trying to push back protesting opposition members.

A ruckus was witnessed as PTI MNA Murad Saeed lunged towards PML-N’s Abid Sher Ali as the two engaged in a verbal scuffle. Both of the lawmakers were separated by their respective party fellows to ease down the situation.