The rebirth of people’s politics

In the post-9/11 global dynamics, the roots of religious extremism and militancy deepened in Pakistan and eroded its social fabric

Due to bad governance and failures of flawed state policies, common masses in Pakistan have remained deprived even of their basic rights. The state adopted policies that only favoured elites, including security establishment, bureaucracy, etc.

On the other hand, the political elite have also been beneficiary of it.

In 2010, Pakistan Tehreek-e-Insaf (PTI) emerged as a third major political party in the political landscape of the country. The party made promises to people and won their hearts. However, the optimism was very short-lived as the party failed to serve people and turned out to be a platform only for traditional politicians and status quo.

In the post-9/11 global dynamics, the religious extremism and militancy deepened in Pakistan and eroded its social fabric. The common people, especially the minorities, are the ones who are bearing the brunt of the militancy that has escalated to massive levels.

Thousands of people have been killed and millions of people uprooted from their home towns. The terrorists did not spare any place and targeted schools, colleges, universities, hospitals, funerals, markets, guesthouses, gas stations, bus terminals, mosques, imam bargahs, shrines and so on.

The state must listen to the demands of PTM protestors. Any misadventure by the state will result in more unrest in the country

The Northwest of Pakistan, especially Federally Administrated Tribal Areas (FATA), and the adjoining areas in Khyber Pakhtunkhwa (KP), was severely hit by religious extremism and militancy. Moreover, the natives of these areas were dislocated to launch operations in these areas to end militancy and bring back peace.

Many people who returned to their home towns found demolished and destroyed infrastructure. They were never compensated for what they paid to end militancy.

On the contrary, they have been subjected to inhumane humiliated at military checkpoints. Moreover, a draconian law like FCR remains in effect in FATA where people do not even have basic human rights. 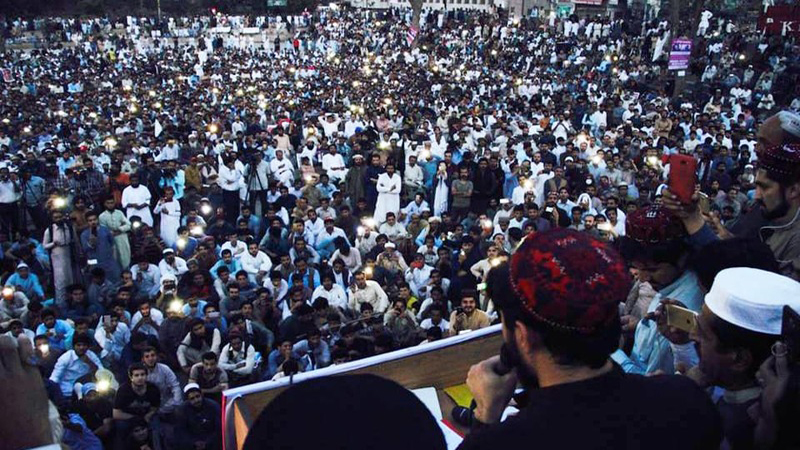 They have often raised their issues in various Jirgas and political gatherings conducted in last few years. However, the state and the government showed little interests to mainstream FATA by providing equal rights under the constitution.

In late 2016, a movement called Mehsud Tahaffuz Movement was launched by youth in FATA. The primary objective of the movement was to get tribal areas rid of landmines and demand compensation for the victims of terrorism.

However, the politician, media and establishment did not listen to their grievances. In late December 2017, they planned a long march towards Islamabad. The death of Naqeebullah Mehsud, a young inspiring model from Waziristan, in a staged police encounter sparked further anger in the tribal youth and other Pakhtuns. Manzoor Pashteen, the then leader of MTM, started the already planned march with two dozen people from DI Khan. On their way to the capital, the marchers stopped in various cities in KP such as Bannu, Kohat, Peshawar, Charsadda, Swabi and Mardan and appealed to the people to join their march for ‘justice for Naqeeb’ and raise voice against victimisation of Pakhtun across Pakistan.

The protesters sat in front of Islamabad Press Club for over ten days. Unlike other protests held in capital, it remained peaceful and non-violent despite the fact that thousands of people from KP and FATA attended it.

The sit-in ended after the government accepted their demands in written including arrest of police officer involved in Naqeeb’s murder, forming judicial commission for extra judicial killings, recovery of all missing persons and presenting in courts, clearing FATA of land mines, and an end to humiliation at checkpoints. Interestingly, the organisers of the march realised that the grievances of the fellow Pakhtuns are similar to what they encounter in tribal areas.

This marked the birth of what is now known as Pakhtun Tahaffuz Movement (PTM). The movement did what a democratic political party was supposed to do; PTM became the platform of voiceless people oppressed for decades.

Unlike other Pakhtun groups, PTM is a grassroot non-violent movement and its young leadership demonstrates better understanding and sagacity about the regional circumstances and how the tribal Pakhtun areas have been exploited for strategic interests of the state elite. Moreover, PTM has received enormous support from Pakhtun diaspora around the world. They have successfully conducted massive rallies and gatherings in KP, FATA and Pakhtun areas of Balochistan province.

In addition, there is also a growing empathy towards the movement from non-Pakhtuns across Pakistan. They are trying to share their decade long grievances with fellow Pakistani citizens in Punjab province.

The state has been trying to discredit the movement by using various tactics and pressurising PTM leadership.

Thus, the state must listen to their demands and provide a clear roadmap for the future of the country in which basic rights of the people are guaranteed. Any misadventure by the state will create more unrest in the country.

The writer is PhD scholar in Department of Politics, University of Otago, New Zealand