PML-N’s confusing discourse on the establishment

Our democratic system is in a transitional phase, and we need to work for the long-term continuation of this process at any cost

These are interesting times. The liberal and secular ‘paid sympathisers’ of Nawaz League are supporting former Prime Minister of Pakistan Nawaz Sharif and his party just for the sake of safeguarding democracy.

It is an open secret that a long list of so-called liberal journalists, social media activists and even media empires are working as PR representatives of the ruling party and we know the reason: They are obviously enjoying the perks, power and influence on behalf of the present government.

Furthermore, they are also searching for other like-minded voices to create a positive image of Nawaz Sharif and thus to highlight the dangers to democracy from so-called ‘custodians of the state.’

I do respect my fellow journalists’ freedom of expression. I also believe that few of the claims mentioned above are true that powerful factions of the country are weakening the democratic system to keep their power intact. However, that does not mean to ignore the ongoing compromising efforts of ruling party with the same undemocratic powers.

Two national narratives are prevailing in the country at the same time that need to be thoroughly discussed and analysed while it is highly important to find the answers to some crucial questions too.

Sources claim that Sharif family has also been allegedly facing internal disagreements and power rift for last several months on different issues. Some analysts even claim that a powerful member of the family was responsible for the ousting of Nawaz Sharif from the party leadership. Nawaz Sharif, when found cul-de-sac at the end of his long political career, appointed his younger brother and Chief Minister Punjab Shahbaz Sharif as the president of the party. 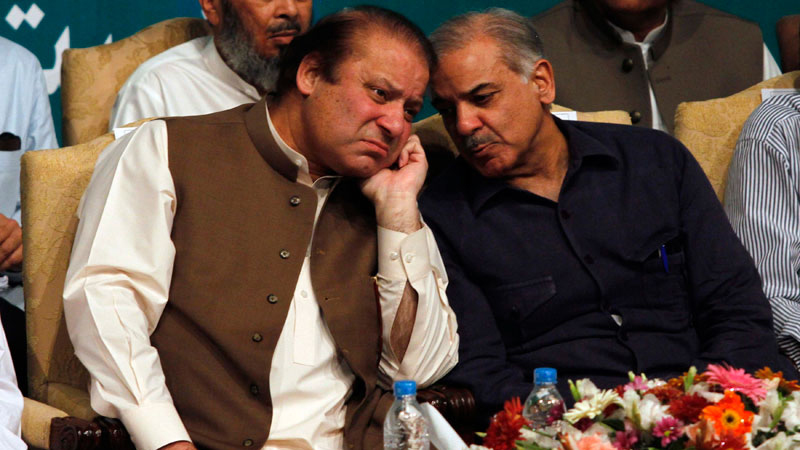 Sources claim that few federal and provincial ministers played an important role in this historic episode of political epic. Now the N-League has become S-League.

Moreover, the PML-N’s top leadership still belongs to Sharif family, but we also observe this trend in PKMAP, which claims to be an arch supporter of democratic values. Similarly, If George W Bush could become President of the US and Hillary Clinton contested elections for the slot of the US President, then criticising Pakistani politicians to promote their family members in politics is of no use.

It is a fact that both in the East and the West, we could see that influential political families are ‘residents’ of power corridors. Therefore, a majority of paid sympathisers believe it was the legitimate right of Shahbaz Sharif to become President of the party as he is a well-experienced politician and one of the most senior members of the party. This argument makes some sense, but as a vigorous advocate of the democracy, I believe that Shahbaz Sharif should rely on people’s power instead of seeking help from non-democratic forces.

Yet again, the state of affairs is not much different in Pakistan People’s Party, Pakhtunkhwa Milli Awami Party, Awami National Party and other small political groups like Pakistan Awami Tehreek. They are all political dynasties. And we have accepted this reality as a ‘core and natural’ part of our democratic system.

However, the ground realities seem bit different. The second narrative is about pro-establishment politics of ruling party. For instance, Shahbaz Sharif is still trying to reconcile with the higher brass of powerful circles of the country. It is not clear who is mediating a deal between these two, but there is something ‘mysterious’ going on in the twin cities.

Sharif brothers and the PML-N should end their confusion: either they are with the establishment or not

The real question still remains unanswered: If Nawaz Sharif is a populist and an anti-establishment leader of the country, as claimed by him and his allies, the PML-N leadership’s efforts to reconcile with the establishment are astonishing.

Secondly, what was the meaning of Nawaz Sharif’s showing regret for his involvement in Memogate scandal as a practitioner?

He also said clearly: “My involvement in the controversy as a practitioner against former president Asif Ali Zardari in the case was a mistake.”

This statement has countless hidden messages. It is possible that he was giving an indirect message to former President Mr Zardari and accepting his mistake to go against him and democracy, trying to seek his help once again. It is, however, a weak argument and reconciliation between Nawaz Sharif and Zardari seems impossible.

The second discourse somehow makes some sense. It is possible that Nawaz Sharif was trying to assure the military establishment that he worked for them in the past for several times and he wants some reward for it.

Thirdly, if Nawaz Sharif confessed his mistake open heartedly then why did the ruling party give a ticket to Mushahid Hussain Syed, who is an ‘informal’ part of the military establishment, just before the Senate elections? Can the PML-N leadership justify this decision?

According to some reliable sources, Mushahid Hussain Syed has replaced Chaudhry Nisar on the advice of Nawaz Sharif and is now mediating a deal on behalf of the PML-N with the military establishment.

At the same time, Nawaz Sharif chose Raja Zafar-ul-Haq for the slot of Chairman Senate who has good repute in influential non-democratic elite from the last three decades. Likewise, Nawaz Sharif ‘appointed’ Shahid Khaqan Abbasi as the Prime Minister of Pakistan to give a positive gesture allegedly to ‘Pindi Walas’.

Furthermore, in March, there were rumours that newly elected president of PML-N, Shahbaz Sharif, secretly met Chief of Army Staff (COAS) General Qamar Javed Bajwa twice. The DG ISPR, although, rebuffed the news of these meetings. It is a fact that both Shahbaz Sharif and Chaudhry Nisar maintained contacts with the different Army Chiefs in the past and they are still trying to maintain these good relations.

However, Shahbaz Sharif met COAS in the first week of this month. He not only admitted his meeting but also praised the professionalism of COAS. He cleverly said: “We must respect and honour the endeavours undertaken by the army chief”.

As discussed earlier, it would be fair if the PML-N under the leadership of Shahbaz Sharif contests elections based on his performance and not seeking the help of ‘Third Umpire’. True democratic leaders should not seek help from the non-democratic actors.

It is an interesting and witty fact that both secular and right-wing journalists and intellectuals are supporting Nawaz Sharif at the same time and one major media outlet is literally propagating in favour of the PML-N. These journalists and thinkers may think that they are on the right side of the history but, in fact, they are misleading masses by showing only one side of the picture and ignoring the facts mentioned above. As we know, the PML-N’s media cell has always been so proactive in negative image building of its rivals.

Furthermore, the leadership of the PML-N is only making lame excuses on their eight lawmakers from South Punjab parting ways with the party, who claimed that their only demand is to make Southern Punjab a separate province.

According to the independent sources, 15 to 25 MNAs from southern Punjab are still ready to leave the ruling party. If this happens, PML-N’s political future, even in Punjab will be miserable because this time the party is going to contest general elections without Nawaz Sharif.

On the contrary, Nawaz Sharif and his allies are taking strong stand against the judiciary, but they are literally silent about the ‘Masked’ powers. Sharif brothers and the PML-N should end their confusion: either they are with the establishment or not. I still believe that democracy shall prevail, but in this specific case, we should need to defend democracy and not a single person or a party.

In the scenario mentioned above, we cannot neglect the role of PPP and especially Zardari, who is playing his cards carefully and apparently in good books of power circles of the state.

In fact, our democratic system is in the transitional process, and we need to work for the long-term continuation of this process at any cost. Defending individuals or a party is not good for anyone and not even for ‘migratory birds’.