Shazia remembers waking up to a beautiful sunny day, which only turned into a horrific life-changing tragedy with the news of her father’s death 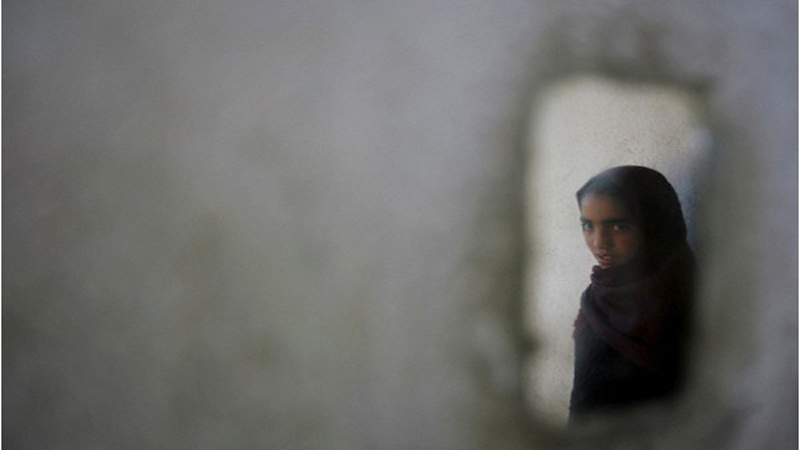 “No money… no food,” said Shazia Allahyar, a girl child, a wage earner, and a highly exploited human being. She considers herself a brave and fearless princess who wears the crown of her innocent yet clever childhood; she is the 9-year-old provider for her family, the heroine of her own fairy-tale.

Shazia remembers waking up to a beautiful sunny day, which only turned into a horrific life-changing tragedy with the news of her father’s death. That day, in a village near Multan, the Allahyar family in Chak Mughal was devastated by the death of the only earner in the family, the cause of death being a snake bite. This was the fate of many brick makers in villages, who succumbed to death at the hands of their job.

A lingering memory makes Shazia smile, as she talks about the day she tread a new path, the day she went to her mother and said she wanted to earn, NOT study.

“Parhti tou khaattay kaisay?” said the child in such a matter-of-fact tone that expressed how the realities of the book of real life taught her more than school books ever could.

“Teachers used to beat me anyway, so I left school and got work in Multan,” she continues to unveil the ugly face of our socioeconomic conditions. Unfortunately, Shazia’s situation though heartrending, isn’t one of a kind.

A 2017 report by the National Secretariat on the Child Rights Movement claimed that Worldwide 218 million children between the ages of five and seventeen were in employment. Only in Asia and the Pacific region, one in four were child labourers, with a ratio of seventy-three percent being boy workers and twenty-seven percent girls as workers. After a decade of reminders and struggle to spread awareness, June 12 was declared as a World Day against child labour. The secretariat of the National Child Rights Movement towards the end of the same year claimed that 12.5 million children were reportedly involved in child labour in Pakistan. Another report by the International Labor Organization (ILO) in 2004 gave the figures of 264,000 children being employed in domestic help.

Leaving behind six sisters and two brothers, her eyes bright and eager to see the lights of the beautiful city of Lahore, Shazia came to her new hometown. They had left their village to come work in the Shehar, renting a two-bedroom small area in Kothay Pind (Pind near Faisal Town). Working since two months, her tiny hands washing dishes, cleaning up after everyone and making tea for her employers, Shazia is happy to believe she is a super girl. A full-time house helper, she stays at a home, where “home” means everything but family, because she is a worker rather than a member, and she has no other choice. Whenever asked about the whereabouts of her family, Shazia in all her innocence replies, “They live in the Pind. I like the city more.” She is unaware of the very fact that the Pind is just ten minutes away from her location.

How unfortunate to have come to know of these cold, harsh truths in such tender years. Even though she puts on a brave face, somewhere deep inside it must break her little heart to live and work for her family as a provider when she could be making mud pies instead! If you get a chance to meet Shazia though, you won’t be able to tell that this little slip of a girl has a care in the world. Looking radiant as ever in her messy and upheavaled appearance, she is overwhelmed by the idea of being interviewed.

“Parhti tou khaattay kaisay?” said the child in such a matter-of-fact tone that expressed how the realities of the book of real life taught her more than school books ever could

However, it seems that in Pakistan, all these goals and targets have no role to play. According to a report by the Ministry of Planning and Development in 2016, approximately 55 million people are living below the poverty line, thus making it inevitable for our children to have the privilege of nourished food and a good quality education. A similar report that claims of provincial child labour data statistics states that Punjab holds 60 percent of the total child labour in the country, where NWFP has about a million children in employment, Sindh has 298,000 children as workers, and Balochistan reportedly has 14000 child workers.

Shazia smiles brightly, her eyes filled with glimmer, as she gives answers to questions while she feels on top of the world. “I even go out to the market at night sometimes; no one touches me because everyone knows me… I don’t need to be protected.” She thinks of herself as a Doremon (the robotic cartoon character with problem-solving skills) in the real world.

Upon being asked about her employers’ treatment towards her, she answers, “I always play with bhaiyya, and if I have work, I work first and play later. We go to parks, and I play with the kids in the family. Sometimes, they hit me too but as a joke, so it’s ok.”

The National Child Rights Movement Secretariat reported last year that 8.25 million children were home-based workers in the country, where child labourers uptil the age of 10 estimated about 6 million, according to reported figures. The matter is unquestionably of utmost importance, but with poor governance and lack of resources, many issues continue to linger on. The last survey on child labour by the government conducted in 1996 stated findings of 3.3 million out of 40 million to be economically active.

The fact that this issue has never been seriously taken up, is most unfortunate. Even though, in Pakistan, the Employment of Children Act 1991 states that it is illegal for children under 18 years to work. Yet, even with legal standings, children are employed due to loopholes in the law and lack of implementation of the law. Indeed, education seems a far-off dream when there is nothing to eat.

This is not only the life of Shazia Allahyar but of the many other children who take up work in order to get out of hunger, poverty, and thrash beatings by government school teachers. If only the World Day against child labor was considered far more seriously than it already is, Shazia might’ve been studying today.

With families living so near, yet so far, children like Shazia find a home away from their real home. They find brothers/bhayyias without any blood relation and employers as mothers in them. An empty feeling beneath her brittle smile, Shazia looks up, as she is asked the question: “Will you study if I teach you?” “I will take permission from baji and study,” she answers with a pause. That very instant, her eyes shine with hope, and she confesses, “I wanted to be a doctor… when I was small.”

Teary-eyed, I smile at her and say, “You are a child”. She laughs and says, “A child over three years is big, like you.”

Laws should be upheld by our judicial system, and the government should use its writ to take notice of this malice of child labour. It cannot be justified as fulfilling needs of food and shelter. This whole debate only shows how we have failed as a nation, to provide. Upper-class children live under the finest shelter with the best to eat, but it is not the same for a child we employ as our domestic help – a thought-provoking issue. This shakes our soul and pinches the heart… for only seconds… until we turn our eyes blind, ears shut, and mouths sealed. A striving nation justifies just about anything. Alas, let’s only celebrate June 12, and sleep on the issue for the rest of the 364 days.

The author is a graduate of international relations and a social worker. Can be reached at anummohsin_91@hotmail.com