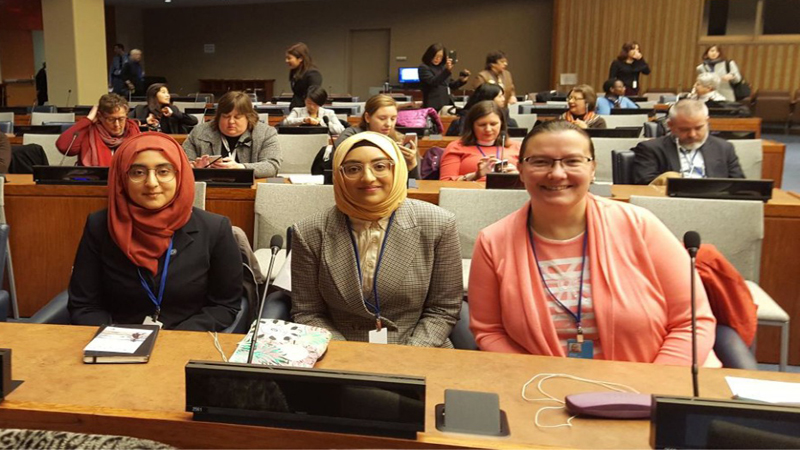 According to the statement, MQI North America representatives including Social Media Coordination Council member and President of MYL Sisters in Canada Safyah A. Malik and executive member of MYL Sisters Canada Aisha Ahmad attended session on behalf of Minhaj-ul-Quran International.

The opening ceremony of session was held at the UN General Assembly Hall. While briefing the attendees, UN Executive Director Women Phumzile Mlambo-Ngcuka directed all participating NGOs to present notes regarding their field of work.

Speaking on occasion, Safyah told the attendees about MQI’s ongoing work, both in the West and the Muslim world, which is aimed at providing solid evidences of nefarious role of terrorist organisations are playing, and the importance of counter-narrative of terrorist ideology.

She told that “Islam is a religion of love, peace and tolerance. Islam supports women’s political, social and economic role in national life. Those who want to curtain of women role indifferent aspects of life they are ignorant of true teachings of Islam.”

The statement further said that the topic under discussion was titled “how the UN can help women who are abused” and that Minhaj-ul-Quran was the only NGO in the session that was representing Muslim women living in West.

Moreover, the issue of young females who were oppressed and brainwashed into becoming “Jihadi Brides” was discussed, while questions were posed on how the UN was working to improve those policies that promote violence and adversely affect women and children.

MQI pattern in chief Tahirul Qadri congratulated the women delegation participating in the UN conference and for presenting true teachings of Islam regarding empowerment of women.

MQI has special consultative status in UN since 2011, therefore is regularly invited at UN meetings and conferences around the world, including North America and Europe.