Commission on enforced disappearances has failed, disband it or reform it: rights activists 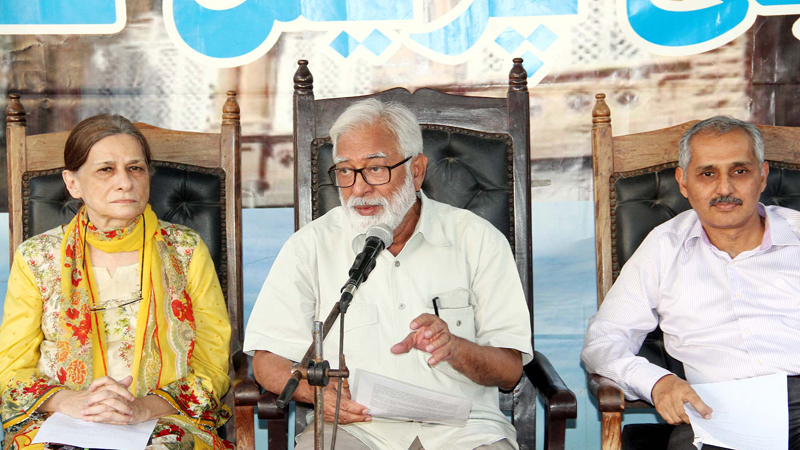 KARACHI: Several leading civil society and rights protection organisations on Friday expressed serious concerns over the deteriorating state of human rights in the country as well as curbs on basic freedoms.

Addressing a joint press conference at Karachi Press Club, activists demanded the government to ensure provision of fundamental rights to all citizens.

Karamat Ali said a number of political and civil society activists were still missing in different parts of the country, as many such people were reportedly taken away by the law enforcement and security agencies from their homes without producing them in any court of law.

“Families of such missing persons are facing numerous problems including psychological, economic and social problems, but they fail to find any clue or whereabout of their loved ones. It is a big human tragedy and the courts are unable to provide any relief to such families,” he said.

“The Commission on Inquiry into the Enforced Disappearances has failed to deliver. It should be disbanded or reformed so that it works effectively under a new leadership. Due course of law and right to fair trail should be ensured,” he said.

Ali pointed out that for many weeks now, transmissions of a leading news channel [Geo News] was suspended by cable operators in many parts of the country for no specific reason. “We believe this is a direct attack on the freedom of press. There is a long history of struggle for freedom of expression and speech in Pakistan. The media is facing restrictions on the behest of certain forces in the security establishment, who enjoy impunity and there is no accountability for them.”

“As the current government is completing its tenure and we are hopefully moving towards the next general elections, we demand a grand dialogue on ensuring basic freedoms. It is important to review the situation of basic rights during the last five years and find reasons and to identify those responsible for curtailing citizen’s rights.

“We must have a collective agenda and commitment to basic rights and mechanism in place that ensure that fundamental freedoms are not compromised and restricted in any circumstances.”

Further, he said the civil society will soon be holding a series of meetings with all major political parties in this regard and seek their support and commitments on this important issue.

Right to assembly, association, speech and religious belief are fundamental human rights guaranteed under international conventions and the Constitution of Pakistan. However, these laws have come under severe attack for the last many years, with some disturbing developments in the recent days including disappearances of secular and liberal bloggers and peace activists from urban centres of Pakistan, targeted killings of political activists, extrajudicial killings, and more recently, curbs on media freedoms and cancellation of debates on key national issues at university campuses.

Ali further noted, “the first issue is that of restrictions on freedom of speech and assembly at educational institutions. We are very much concerned about the way a seminar scheduled at Habib University was stopped at the last moment. There are other examples that seminars or debates were not allowed inside universities’ campuses at many places in the country. Faculty members who speak in favour of these freedoms have been fired. We believe that these actions to curb freedom of speech and assembly at campuses will have very negative impact on the society.

“Despite the announcements of restoration of students unions since 2008, the unions are still banned in the public as well as private universities and colleges all over the country. A professor in Punjab University has been removed from the service on charges of nurturing critical thinking among students.

“We are equally concerned about the way certain political leaders are being targeted and restrictions are being imposed on their basic freedoms such as freedom of speech. All institutions must respect each other and also citizens of Pakistan.”

“We are also concerned at the way social movements are being targeted. We condemn the arrest of Younis Iqbal, the founder of the Anjuman-e-Mazareen, a peasant’s movement in Punjab. It is shameful that he has been arrested in fake cases and declared a terrorism suspect. It looks like our authorities have never learned from past and they are using the same tactics of declaring peaceful citizens terrorist. Okara’s peasant movement is a well-known rights movement and we support their just demands and ask for immediate release of Younis and others.

“Similarly, there are recent terrorist attacks on people and worship places of minorities communities in various parts of Pakistan. Many lives have been lost on targeted attacks on Christians in Quetta and some parts of Punjab. Attacks on already fragile minorities are casting very badly on Pakistan’s image internationally and also internally. Government must take measures to ensure that basic right of life is protected. All those involved in these heinous crimes be arrested and punished. It is also important that victims’ families are adequately compensated and protected.”