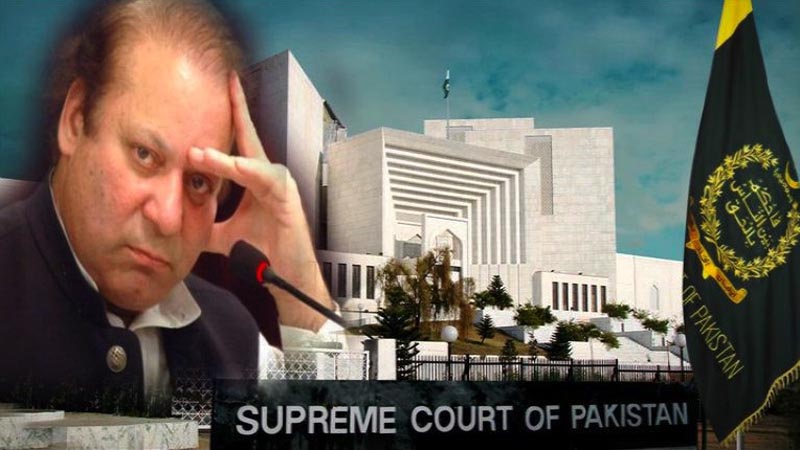 Supreme Court’s verdict regarding the disqualification of the politicians can be termed as a de facto judicial coup in Pakistan. This decision means that Nawaz Sharif is disqualified from holding any public office for his entire life. It was a decision everyone knew long before it was announced, as the invisible forces are not ready to give any space to the former PM.

The court verdict has not only denied the fundamental right of Sharif and political party, but has also taken us back to the era of General Zia. Articles 62 and 63 were introduced by Zia-ul-Haq to victimise political opponents and the tried and tested methods of the invisible forces are proving effective again. Moreover, it appears the court will soon impose a ban on Sharif’s live speeches and public gatherings too.

The way things are going, it can be predicted that Sharif will be indicted in the cases running in the accountability courts and that a time will come when even the voters of the PML-N will be disqualified through the courts from participating in the electoral process. Sadly, the judiciary is again lending support to the invisible forces and validating the fact that the whole system is tailored to undermine democracy.

The judiciary has certainly entered the domain of the parliament and it seems that the political forces, who are backed by the establishment, have inflicted damage on their own institution. It can be termed as a black day for democracy where a political leader was denied the fundamental right of contesting elections. The credibility earned by the judiciary after the Lawyers’ Movement for restoration of the judiciary in 2007 seems to have been lost.

It seems that lessons from history are not being learnt and the process of hijacking the mandate of electorates will not be stopped. The recent court judgment is a clear indication that soon Sharif’s speeches will be banned and he may be not even be allowed to hold public gatherings. The cases in the accountability courts will also prove to be enough to send him behind bars.

But will this end Sharif’s political career or will it prove helpful in orchestrating a planted electoral win for Imran Khan and Asif Zardari – the perceived pawns of the invisible forces? The answer seems to be in the negative. The recent judgment has in fact strengthened Sharif’s narrative and created a wave of sympathy for him. On the other hand it is almost impossible for the invisible forces to manage elections to the extent that Zaradari’s  PPP or Khan’s PTI, who only won 27 national assembly seats, can win even a simple majority in the coming elections.

From the Agartala conspiracy case to the Zulfikar Bhutto hanging and the lifetime imprisonment and disqualification of Nawaz Sharif by the courts in Musharraf‘s regime, all decisions are remembered as bad ones and these politicians emerged even more powerful and popular after the controversial judicial decisions. Unfortunately, the recent decision of Sharif’s disqualification is also proving to be another controversial decision and it seems history will again not treat it well. On the other hand the hyper judicial activism is also making it difficult for the Government to function properly.

It is not the domain or duty of the honorable chief justice to visit hospitals, check water sewerage pipelines and address lawyer gatherings every day. One wonders why the judicial activism is only restricted to a weak civilian democracy and institutions and why it is not exercised in missing persons cases, Okara farms and DHA alleged scams? There are around  thousands of cases pending in the honorable Supreme Court and in lower courts. It would have been better to take up those cases instead of taking up political cases. Now in the current situation, the honorable court has to bear the criticism as it is the election year and Sharif will not sit silently, in fact he will strengthen his narrative by becoming more vocal about the flaws in the judicial system and on the merit of his case which resulted in his disqualification.

The battle will become uglier and analysts and invisible forces who are expecting a ban on Sharif’s politics, like Altaf Hussain, are totally wrong in their assumptions. Altaf Hussain never enjoyed the credibility factor nor had he much of a record of good governance under his belt. He was created by the establishment to counter the People’s Party in Karachi, his political success built on the backing of the dictators and through fear.

Contrary to that, Sharif has earned respect across the country, his contribution to democracy, be it a struggle against dictatorship or a movement to restore judiciary are widely acknowledged. His development work, mega infrastructure projects, educational and health reforms are acknowledged by the masses. Sharif’s anti-establishment narrative and stance on civilian supremacy and his liberal and progressive stance in a conservative society not only wins him the support in the country but also in the global community.

So there are no similarities between Sharif and Altaf Hussain, and expecting Sharif and his party to vanish like Altaf Hussain or the MQM can be only the wishes of the invisible forces, but does not seem possible in reality. Sharif is, in fact, capable of launching a massive campaign of agitation against the visible and invisible opponents which can lead us to a situation where only the state and the federation will be the ultimate looser.

This means that we will, therefore, see more dirty moves and that state institutions will be used to eliminate Sharif politically. The big question that remains is will Pakistan ever see a real democracy instead of a controlled one. The black decisions remain as black judgments and no amount of propaganda or power can term them fair judgments. Javed Hashmi, a veteran politician, disclosed the conspiracy of the invisible forces in 2014 and revealed at that time that Imran Khan was told by the establishment that a judicial martial law would soon be imposed and that Sharif would be sent home. Javed Hashmi still to this day repeats the allegation and has challenged the court many times, but has never been sent a notice of contempt.

The current chain of events indicates that Javed Hashmi was right and the judicial coup was in the making. The late Asma Jahangir had stated before her death that the “caretakers are already here and we are living under an undeclared martial law.” One wonders at which point the invisible forces and honorable judiciary will learn from history. The hijacking of the mandate and efforts to remove a popular leader of East Pakistan led to the debacle of the fall of Dhaka but it seems even that tragedy has not taught the lesson to the invisible forces.

The honorable court should also learn from recent history where the Dogar court decisions were declared null and void after the restoration of democracy. An elected representative can be convicted only if proven guilty of a crime, not on the basis of likes and dislikes. Controlled democracy is a form of dictatorship and has no place in the modern world, nor is there one for a judicial coup.

The current judgment of disqualifying Sharif for lifetime actually undermined parliament and if the lawmaking body of the country is dependent on the judiciary’s interpretation of law then why is there a need to have only a symbolic parliament and symbolic democracy? The process of undermining political leadership and democracy is actually undermining the state itself. It is a silent judicial coup in Pakistan against the elected government and to minus the Sharif’s PMLN. How ever this time Sharif’s fate remains in the hands of the masses not the judiciary and the invisible forces, as Sharif is riding a wave of sympathy.