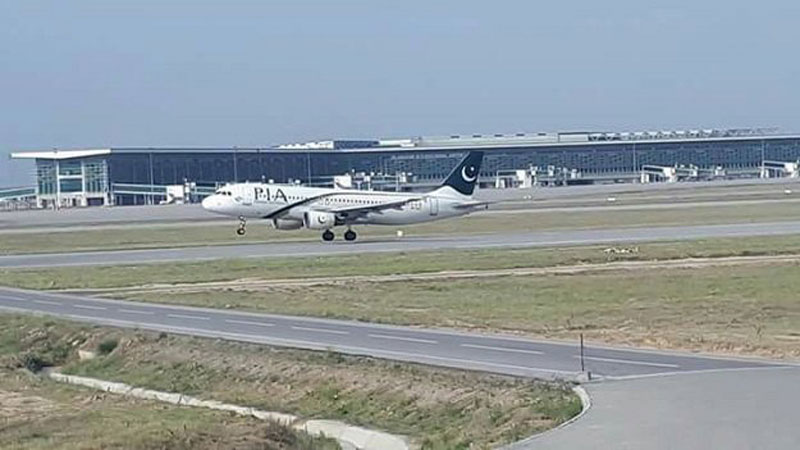 ISLAMABAD: The formal inauguration of the new Islamabad International Airport has been delayed once again.

The country’s biggest airport is likely to become fully operational on May 3rd.

“Earlier, there was a plan to start international flights operation at the new airport from April 20, however, the date was changed due to the ongoing final tests at the site”, Pakistan Civil Aviation Authority (CAA) deputy director general Aamir Mahboob said, while talking to a group of journalists during a visit to the newly constructed facility.

He said, “we were ready to launch flight operation from the 20th, but Advisor of Prime Minister on Aviation and Federal Secretary Aviation directed us to retest all facilities and operations being provided before formal inauguration to avoid any inconvenience to passengers.”

He highlighted the salient features of the new airport in his briefing and informed the journalists that the facility was spread over 4,238 acres of land and was linked with two roads to provide easy access to passengers.

The airport is 30 kilometres away from Zero Point, Islamabad, and 35 kilometres from Rawalpindi Saddar. The new airport terminal building consists of 4 levels, 2 runways, 6 taxi links, 3 rapid taxi ways, and 5 aprons, including a cargo apron and parking bays for wide-body aircrafts.

“Besides the passenger terminal, the new airport also houses a cargo terminal, air traffic control complex, fuel farm and a state of the art 50-bed hospital to cater to emergencies. The hospital will also benefit people living around and travelling on motorway,” he said.

The airport is fully equipped to handle all types of aircrafts, including Airbus A-380 and is capable of serving nine million passengers and 50,000 metric tons of cargo, annually.

Though the CAA officials were not sure about the permanent use of the Benazir Bhutto International Airport (BBIAP), however, sources claimed that the control of the old airport would be given to the Pakistan Airforce after the new facility was made operational.

The main car parking area has a capacity of 2,200 vehicles with 9 entry and exit points.

Responding to rumours about water shortage at the premises, DDG Aamir Mahboob clarified that there was no shortage of water as a dam named Ramma Dam measuring 282 acres had already been completed by CAA, while another, Kasana Dam, measuring 700 acres was in the pipeline.

“The water capacity of Ramma Dam is 2,122 acre feet against the maximum capacity of 4,890 acre feet, which is sufficient for the next one year,” he said, adding, “Meanwhile, we are trying to complete the second dam while we have already done two successful underground bores for water, which are also supplying water to the new airport.”

Responding to the journalists, CAA planning director Nadir Shafi Butt said the total expenditure incurred on the airport was Rs105 billion, whereas the initial PC-I was just for Rs37 billion.

“The cost of the project has been increased due to delay and inclusion of additional and latest facilities time to time.”