The status of Gilgit Baltistan

The US defence secretary James Mattis while appearing before Senate and House Armed Services Panel informed them that the China-Pakistan Economic Corridor (CPEC) passes through disputed territory. Here it is important to look into the history of the so-called disputed status of Gilgit Baltistan (GB).

Due to the infighting for power among the local rulers of Gilgit, a representative of Karim Khan (ousted Raja) went to Kashmir to seek assistance from the Sikhs. That precise moment changed the history of Gilgit, thereby introducing an outside force in the area. In 1842, the Maharaja of Kashmir sent an army of one thousand under Colonel Nathu Shah.

The Sikh Army succeeded in restoring power to the Raja in Gilgit. In 1848, after regrouping, the powerful ruler of Yasin, Gohar Aman invaded Gilgit and destroyed the Sikh forces. This resulted in further reinforcement from Kashmir. In 1852, Gohar Aman again attacked Gilgit and crushed almost 1500 Dogra forces under Bhup Singh. In the case of Skardu, it remained under the influence of Mughals who imposed tribute on them. Sikhs considering themselves as successors to Mughals also demanded tribute from Baltistan.

Mohammad Shah from the Raja family also sought Sikhs help in his fight for the throne of Skardu.  It was again the struggle for power which led to the occupation of Skardu by the Dogras. On 16 March 1846, Kashmir was sold to the Maharaja by the British for 75 lac Nanak Shahi, and a treaty was signed.

The only solution to the issue is that the people of GB be given representation in the parliament of Pakistan, in accordance with the population

According to the article one of the treaty, it was stated that all the hilly and mountainous country with its dependencies situated to the eastward of River Indus and Westward of River Ravi were transferred to Maharaja Gulab Singh. In this treaty, there is no mention of Gilgit which is located north of Indus. According to Frederic Drew, a commission was sent to demarcate frontiers. But this was denied in a confidential report by RC Kak (Chief Secretary of Kashmir) in March 1939 that commission was never appointed.

In 1851 and then in 1852, Chilas was attacked by Dogras but they failed, and 1500 Dogra troops were killed.  Gohar Aman ruled Gilgit until his death in 1860. Immediately after his death, some of the local Rajas, who were fugitives in Jammu, returned to Gilgit with a Dogra army under Colonel Davi Singh and Gilgit was occupied. For the first time, Wazir Wazarat was appointed in Gilgit and Skardu. In 1889, the British re-established Gilgit as an agency for the second time, and Colonel Durand was appointed as political agent. In 1892, tribal people from Darel, Tangir and Kohistan attacked Chilas to recapture it but failed. In 1892, there was another uprising in Indus Valley under Chilas tribesmen. Durand led the forces to control the rebellion. Durand decided to retain Chilas given its strategic importance and shorter route to British India. 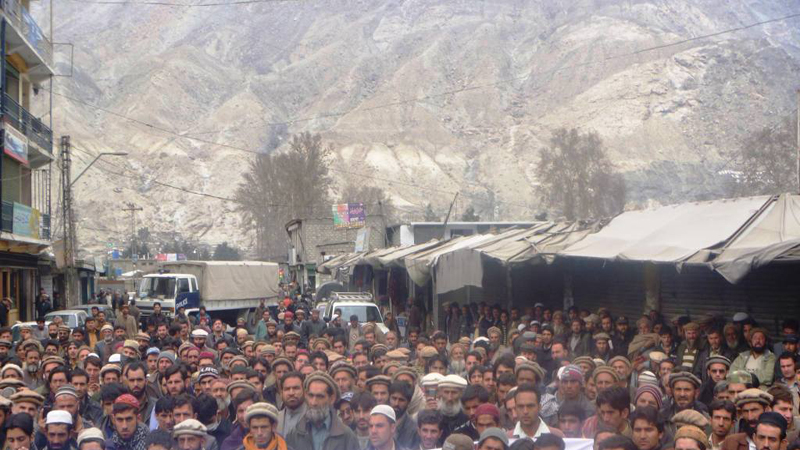 In 1928, the position of these areas was further clarified in a letter from Resident of Kashmir to Director Frontiers Circles, Survey of India that territory comprised within Gilgit agency falls into three categories. First is the state territory, ie Gilgit Wazarat, comprising Gilgit Tehsil (including Bunji) with its Niabat of Astor. Second, the political districts of Nagar, Hunza, Punial, Yasin Ishkoman and the Republic of Chilas. The third was un-administered areas of Darel, Tangir, Kandia (Killi), Jhalkot, Sazin, Shatial and Harban.

In another note in 1929, it was clarified that Hunza, Nagar, Chilas, Kohghizer, Iskkoman and Yasin, though under the suzerainty of Kashmir, were never recognised as a part of Kashmir.

The Gilgit Wazarat included the areas of Astor, Bunji, Harmosh at Indus and Kargah nullah. It is also mentioned in the gazetteer that these areas acknowledge the suzerainty of Kashmir but form no part of its territory, and they only pay tribute to Maharaja annually. In view of the Russian threat, on 20 March 1935, the British decided to take Gilgit Wazarat on lease from Maharaja for 60 years and accordingly an agreement was signed. In this agreement, only Gilgit Wazarat was mentioned, and no reference was made of political agency of Gilgit as the agency was under the British control.

The people of Gilgit Agency proclaimed Gilgit as part of Pakistan and hoisted Pakistan flag. On 16 November 1947, Sardar Alam Khan arrived in Gilgit as a political agent. On 6 April 1948, Gilgit agency was placed under political resident in NWFP to look after the affairs of Gilgit agency including the states in the agency. Baltistan also formed part of Gilgit agency. The tribal areas of Darel and Tangir joined Pakistan in 1951.

In 1949, through Karachi agreement, the administration of Gilgit agency was transferred from NWFP to the Government of Pakistan, and a separate Ministry of Kashmir affairs was created. On 8 March 1993, the AJK high court in a decision directed the AJK government to take over the administration of GB. However, the Supreme Court of AJK overturned the verdict of the high court. The Supreme Court of Pakistan in its landmark decision on 28 May 1999 ruled that the people of GB are a citizen of Pakistan for all intent and purposes and directed the government of Pakistan to ensure that people of GB enjoy full fundamental rights.

It is hoped that the present government will review the situation and ensure the implementation of the recommendation of committees constituted by governments of GB and Pakistan.