The South Asian balance of terror

The frequency of ceasefire violations along the Line of Control (LoC) has reached an alarming level. The Indian army resorted to firing across the LoC even in the presence of members of the United Nations Military Observer Group for India and Pakistan (UNMOGIP) brazenly violating the 2003 agreement. India is said to have violated the ceasefire accord over 1300 times in 2017.

It is very likely that these skirmishes have the potential to turn into a full-fledged war between the two countries. Also, the Indian Army Chief General Bipin Rawat’s indication that they could call Pakistan’s nuclear bluff, his acknowledgment of cold start doctrine, and threats of the Modi administration regarding scraping of the Indus Water Treaty, which Pakistan says it will look upon as an act of war, can any time lead to an armed conflict between the South Asian nuclear powers.

The major bone of contention between the two neighbours is the issue of Kashmir. One terms the valley as its jugular vein while the other calls it its integral part. Nehru, in his telegram to the then Prime Minister of Pakistan Liaquat Ali Khan, declared that once peace returns to the valley both the countries will resolve the dispute amicably and according to wishes of the Kashmiri people. But these words were never honoured with true spirit. The Kashmiris are, till this day, desperately striving to actualise their right to self-determination with diplomatic, moral, and political support from Pakistan. The two rivals have fought three wars on Kashmir and there are high chances of another, probably the last one, if sanity did not prevail. 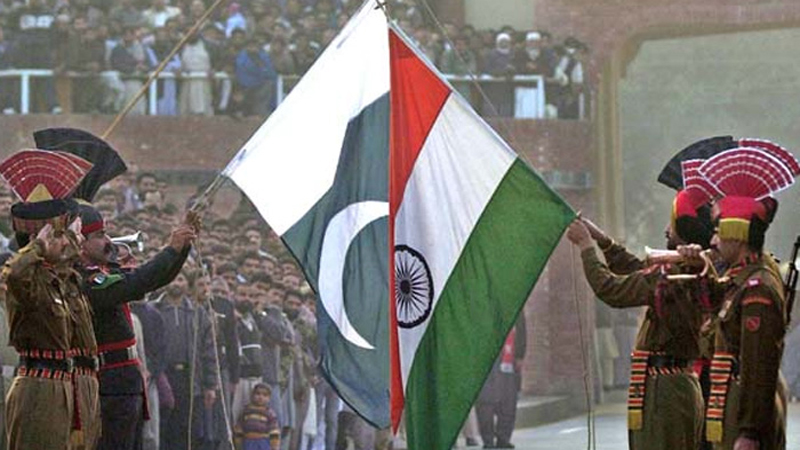 To add fuel to the fire, the Indo-Pak enmity is exploited by politicians for political expediency on both sides of the border though with more furore in India. Right wing parties like BJP contribute to building of anti-Pakistan and anti-Muslim sentiments among the masses and capitalise on its outcomes during elections. This trend is downwards in Pakistan’s politics where election slogans mainly focus on internal issues. The rise of Hindutva, with Modi coming into power, has made the situation more fraught with danger.

Negotiations for resolving bilateral disputes have been taking place from time to time but only to end up in failure. Though India only accepts bilateral dialogues to settle mutual issues with Pakistan yet it always pulls out in between because of one reason or the other. Composite dialogue process was started in 1997 which suffered many setbacks till 2015 and then became part of another fragile process titled as “Comprehensive Bilateral Dialogues”. A terror attack in India should be the reason why the two countries must talk but New Delhi backs off in such circumstances and, instead, starts the blame game. So many hurdles have been faced by the bilateral dialogues that this whole process has been one step forward and two steps backward ever since it began.

Pakistan made many sorts of friendly overtures in the past which could have established a long lasting peace in the region had these been met with a positive response from India. Pakistan’s proposals relating to nuclear weapon free zone, a joint renunciation of acquisition or manufacture of nuclear weapons, mutual inspection of nuclear facilities, concurrent adherence to NPT and IAEA safeguards, and a missile-free zone in South Asia, all fell on deaf ears. Time and again Pakistan has offered Strategic Restraint Regime but India never took heed of such overtures. Even New Delhi is not willing to sign a no-war pact.

Taking into account its annals, in all likelihood the bilateral dialogues wouldn’t go off well. United Nations Secretary-General, Russia, United States, China, and Iran offered to mediate between the two countries but none of this happened due to habitual obstinacy of India. The UNSC, whose primary responsibility is maintenance of international peace and security, must act to stop Indian transgressions in Kashmir and on LoC. It also needs to put pressure on India to accept international mediation for resolution of major disputes including the issue of Kashmir before it’s too late.

Leadership on both sides of the border must realise that development and prosperity can only be brought when dialogues and cooperation are increased simultaneously. Although China is embroiled in many kinds of disputes with its neighbours yet it has forged particularly strong economic ties with them. Why can’t we do it the same way? It would certainly minimise the chances of full-scale war because of economic dependency on each other.

A guaranteed peace between the two nations would be a win-win situation for both. CPEC, Gwadar and Chabahar ports can prove a game changer for the whole region only if wisdom takes precedence over mulishness. Only daring and disinterested leadership in both countries can take prolific steps towards perpetual peace.

As now Pakistan has also confirmed second strike capability and possesses enhanced cruise missiles, either to make compromise or lead to mutual assured destruction, the choice is to be made by the two countries.