‘Articulating the past does not mean knowing it as it really was but taking control of the memory in the moment of danger,’ wrote Walter Benjamin.

The oppressed always draw upon the memory and poetry of the past. This backwards leap is a dialectical one as Benjamin understood it: first towards the past, breaking the continuum of time, and then towards the future constituting new memory. As such, the very act of ‘remembering’ becomes ‘political.’ Thus the French Jacobins conjured up the dead of the Roman period; the Bolsheviks were borrowing from the imaginaries of Paris Communards to give a couple of examples. So goes the story of history, giving birth to events and personages who disrupt the rule of emergency.

One such personage in Pakistan’s context is Manzoor Pashteen, the charismatic leader of the newly launched Pashtun Tahafuzz Movement. Many who are rallying around Pashteen, look upon the movement as one resembling Khudai Khidmatgar and its leader as a torch-bearer of Badshah Khan’s legacy. It is, therefore, worthwhile to take a brief detour and highlight a few relevant historical aspects.

“In this age of anger, where political-economic and ideological demands are increasingly being channelled through exclusionist, myopic and narrowly defined identity politics, the non-violent inclusive approach of PTM is a remarkable achievement”

Badshah Khan was anti-colonial leader commanding a powerful, moral and spiritual presence in the collective memory of Pashtuns. He launched Khudai Khidmatgar movement, based on his philosophy of non-violence and universal humanism, in the late 1920’s for reforming Pashtun society and ending the British rule. When Badshah Khan embarked on his mission, Pashtuns from the ‘Frontier’ were occupying a subaltern position in a double sense. One aspect of their subalternity concerned the Orientalist production of Pashtuns as the object of knowledge by the colonial regime: hence the ‘noble savage’, ‘unruly’ and ‘violent’, ‘hot-headed’ and more ‘manly’ against their ‘effeminate’ Indian counterparts, were the images that mediated their relationships with the colonial regime. Secondly, as ‘volatile’ peasantry and tribes they were denied any agency of their own be able to act as conscious political actors, in the eyes of North Indian bourgeoisie and colonial regime. Hence the late opening of the representative institutions in the ‘Frontier’.

These were the twin material-ideological positions subverted by Khudai Khidmatgar movement that carried out the gigantic task of socio-political and moral transformation of the Pashtun society. However, much has changed since the colonial regime ended, but colonial structures have largely remained intact. The remnants of this colonial structure have transformed the FATA into a laboratory for jihadists, experimented by the Pakistani state for to obtain narrow regional security objectives. ‘’In colonies, the truth stands naked,’’ wrote Sartre in the preface to Fanon’s ‘The Wretched of the Earth’. A picture at one signboard at a military check post in FATA says: ‘’Stop or you will be shot.’’ This is the truth that stands naked in FATA today where, in the useful words of Fanon, ‘’the agents of government speak the language of pure force.’ Hence people here have been denied constitutional guarantees. Here Orientalist representations are combined with the eternal rule of emergency enacted by British Raj, i.e. Frontier Crimes Regulations. It is here where the Islamic Republic of Pakistan has worked its miracles, turning its inhabitants into ‘savages’ to be disciplined at check posts, subjected to collective punishments in crewed nights, and so on. Additionally, due to the military operations, the socio-cultural dislocations these people faced have precipitated traumatic symptoms and a memory crisis in the whole generation, sharpening the nostalgic quest for roots. The generational memory of painful war, destruction of human lives and homes, life under constant surveillance of drones and gunship helicopters and later in camps in scorching heat and freezing winter, is a nightmare forcing itself heavily upon their collective memory – merging the past and present – which is potentially too much to forget. 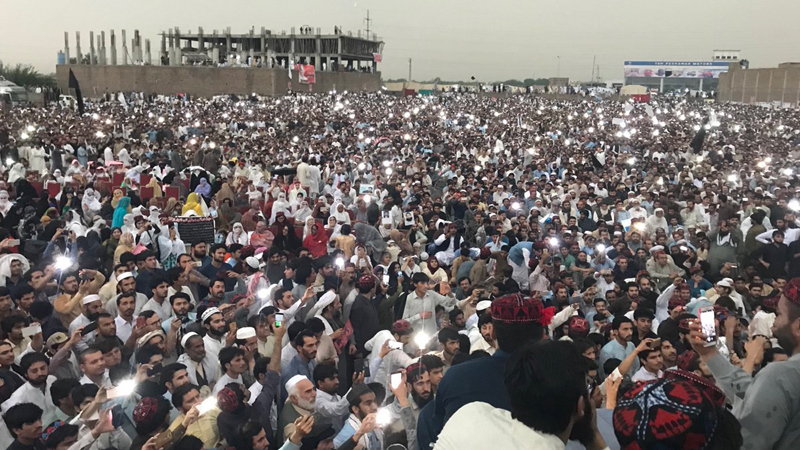 Scholars such as Halbwachs have noted that social groups’ formation and preservation of memory is tied crucially to places, physical spaces and bodies, which in the case of FATA and peripheries have been reduced to rubble along with the memories they materialized leaving individuals uncertain, rootless, and unable to navigate themselves on the map of personal and social memory.’What is remembered and forgotten is closely linked with the issues of power and hegemony. Memory, therefore, has an important role in exclusion and inclusion, and in the formation of national identities and political action.

This takes us back to Pashtun Tahaffuz Movement and its leader Manzoor Pashteen who is a master story teller. The aforementioned dialectic of too much (to forget) and too less (to remember) memory has been shaping the political consciousness of these Pashtuns from the war-torn region for the past decade or so. Consequently, we have seen the emergence of a unique movement in the shape of PTM, which has laid bare the truth of colonially inherited material-ideological apparatuses.

As someone pointed out, it is one of the most inspiring mass movements following the Lawyers Movement of 2007. In contrast to latter, however, it has emerged from grassroots and captured the imagination of far more societal segments: Pashtuns from war-torn areas as the primary victims of the state’s jihadist project; Hazara and Shia religious minorities persecuted by militants; Baloch pushed against the wall on their own land; journalists threatened by ‘unknown’ elements; political and human rights workers and so on.

Following are some of the lessons which can be drawn from this. Firstly, it has the potential to end the war engulfing the whole region. Secondly, it can fundamentally alter the securitized state structure in favour of democratization. Thirdly, as civil rights movement, it can end the oppression to which different social groups have been exposed. In this age of anger where political-economic and ideological demands are increasingly being channelled through exclusionist, myopic and narrowly defined identity politics, the non-violent inclusive approach of PTM is a tremendous achievement. ‘Non-violence is more powerful than the atomic bomb,’ said Manzoor Pashteen, whose humanist aura and rustic ways, popular appeal and speaking power, have been compared with those of Badshah Khan. It shows how those gathering around Pashteen are relating themselves to their own political subjectivisation and the memory inherited from the past.  For true redemption to take place remembering alone is not sufficient. As Benjamin said, it must be accompanied by reparation for the failures of the defeated ancestors and for the injustices and sufferings inflicted on the dead generations. Struggle, therefore, must go on until the dead and alive are equally avenged.

The late 20th century Western culture, while emerging from the horrors of Holocaust, obsessed itself with the issue of memory in what came to be known as ‘memory boom’. The widespread proliferation of museums, films on wars and genocide, and resurgence of public memorials and monuments have given memory a visibility and material form. Is it not high time that our artists, writers and intellectuals brought the social memory of Bengal, Fata to the fore and saved it from suffering the fate of eternal amnesia?

The author is a political worker with interest in social theory, history and literature. He tweets @lattKhan